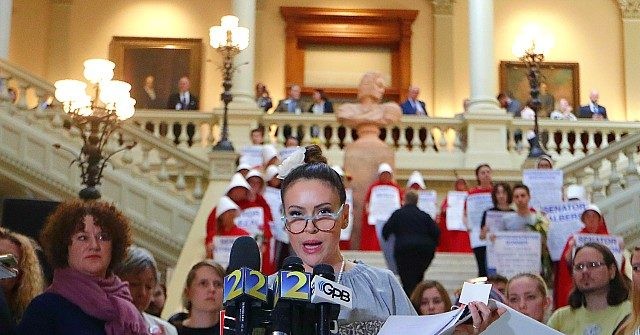 Left-wing Hollywood activist Alyssa Milano stormed the Georgia General Assembly on Tuesday, blasting state lawmakers for what she described as “voting on what goes on inside my uterus” during a protest against the state’s fetal “heartbeat” abortion bill.

“These are the men voting on what goes on inside my uterus,” Alyssa Milano is seen telling reporters in footage shared to social media as she points to male Georgia state representative, who points out that the actress does not vote in his district.

.@Alyssa_Milano: “These are the men voting on what goes on inside my uterus.” #gapol pic.twitter.com/W4am8DZ9ua

Standing up to intense opposition from abortion rights groups, citizens, physicians groups, and even Hollywood celebrities, Georgia lawmakers gave final approval last Friday to a “heartbeat” abortion ban that would put restrictions on abortions in the state.

The proposal now heads to the desk of Republican Gov. Brian Kemp, who supports the bill. If enacted, it would be among the comprehensive abortion bans in the United States. The measure was approved by 92 votes, just one vote more than the majority needed to pass out of the 180-member House.

Women in Georgia can currently seek an abortion during the first 20 weeks of a pregnancy. A heartbeat can be detected in an embryo as early as six weeks, before many women know they are pregnant.

Republican Rep. Ed Setzler, the bill’s author, said it was a “commonsense” measure that seeks to balance “the difficult circumstances women find themselves in with the basic right to life of a child.”

The legislation also was opposed by the Writers Guild of America, which represents TV and film writers, and several Hollywood celebrities, who signed an open letter to Kemp in opposition. The letter, spearheaded by actress Alyssa Milano, includes signatures from Alec Baldwin, Amy Schumer, Gabrielle Union, Ben Stiller, Don Cheadle, Mia Farrow, and others.

“We cannot in good conscience continue to recommend our industry remain in Georgia if H.B. 481 becomes law,” the letter reads.

In a press conference Tuesday, Milano told reporters that the movie business wants to continue doing business in the Peach State. “We want to stay in Georgia. We want to continue to support the wonderful people and the wonderful businesses in the Peach State. But we will not do so silently,” the actress said, reported Greg Bluestein of the Atlanta Journal-Constitution.

More from @Alyssa_Milano: “We want to stay in Georgia. We want to continue to support the wonderful people and the wonderful businesses in the Peach State. But we will not do so silently.” #gapol pic.twitter.com/2InUNZlnym

The threat is significant because Georgia is a burgeoning production hub for TV and film, with 455 productions shot in Georgia in fiscal year 2018, representing $2.7 billion in direct spending in the state.

If signed and not blocked in court, the Georgia law would take effect Jan. 1, 2020.

Kemp applauded the legislature in a statement Friday.

“Georgia values life,” Kemp said of the bill. “The legislature’s bold action reaffirms our priorities and who we are as a state.”