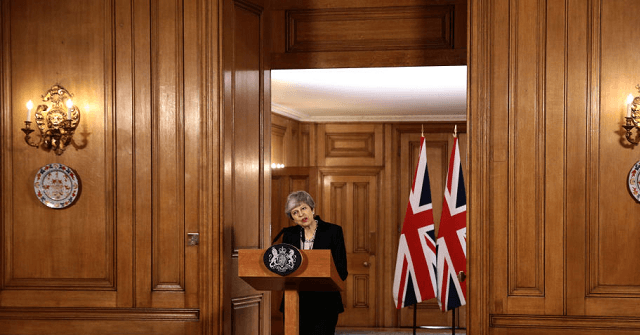 British Prime Minister Theresa May has addressed the United Kingdom — again — after hosting an epic seven hours of government meetings Tuesday and told the nation she intends to delay Brexit again to get her deal agreed by Parliament, or else open the door for a softer Brexit.

The podium moment at 10 Downing Street — merely the latest in a line of addresses direct to the nation by the Prime Minister — came the evening after the second failed attempt by Parliament to seize control of the Brexit process from the government. Rather than indicating what direction they intended to take, Parliament instead voted against every option but before them for a second time.

The Prime Minister chaired two cabinet meetings for over seven hours today in search of a way through the so-called “logjam”, and it was speculated by members of the Westminster bubble that the outcome could lead to a deviation from the plan. This could have meant a softening of Brexit to appease the overwhelmingly pro-Remain Parliament, or accepting a no-deal Brexit next week just to get it over and done with.

As it was, the result seems to have been exactly what the Prime Minister has been doing since day one — more of the same. Inviting the leader of the opposition to talks which she made clear would have to end up with him coming to accept her Brexit ‘deal’, May said she was going to be delaying Brexit yet again to give herself more time to get the deal agreed.

Crucially, the Prime Minister said if there was no agreement she would allow Parliament to vote on what option they want, which the government would then “stand by”. Given the overwhelmingly pro-Remain character of the House of Commons — much in contrast to the wider country which voted for Britain to leave the European Union in 2016 — this would almost certainly mean a much softer Brexit than even the ‘deal’ the Prime Minister was given by the EU.

“We need leadership and my view is what we got from that statement was yet more fudge.”

“That statement from the prime minister takes us no farther further whatsoever and maybe takes us even deeper into crisis because it’s all dependant upon her withdrawal treaty and amended political declaration passing and it may have taken us no further forward at all,” he said.

May handing over power to Corbyn and the Commons is not enough to please arch Europhiles like Liberal Democrat leader Vince Cable who used the crisis to call for another referendum. He said:

Theresa May now finally seems to be accepting that she cannot get support for her deal, though her identifying Jeremy Corbyn as a source of support for Brexit is less surprising.

The way forward, to break the impasse, is for the Prime Minister to compromise and support a People’s Vote, with the option to stay in the European Union.

In effectively putting Jeremy Corbyn in charge of the outcome of Brexit, the prime minister will have further diminished herself in the eyes of her MPs, activists and our supporters. It’s desperate stuff.

The British people voted to leave the European Union in June 2016, and as pointed out by Brexiteers, the country could have left then, or very shortly afterwards. However, the Brexit can — so loathed by the British political establishment as it was — has been kicked down the road endlessly since. How has this happened?

The politicos are, of course, ready with instant reaction. One of the first out of the blocks was Nick Boles, the former Conservative who walked away from the party yesterday evening because Theresa May wasn’t killing Brexit fast enough. The fact he’s welcoming May’s comments tonight probably tells Brexiteers all they need to know about the dangerous new direction May is taking the country — away from the democratically expressed will of the British people:

I have been very critical of the PM and the Cabinet in an interview with @bbclaurak this afternoon. I stand by my words. But the PM’s statement is very welcome. This is the right approach. Better late than never.

Brexiteer Tory MP Andrea Jenkyns has called the announcement a “Further national frustration while the PM kicks the Brexit can down the road,” criticising the prime minister for working “closely with the opposition” which wants a softer Brexit and a second referendum.

Further national frustration while the PM kicks the Brexit can down the road. And why work closely with the opposition who want a softer Brexit and a second referendum. Unless its another tactic to try to push us towards her WA. We are desperate for a Brexit PM. #cabinet

Brexit campaign group Leave Means Leave warns that May’s plans will lead to a “Brexit betrayal,” writing, “The government and both parties promised to leave the EU, the Single Market, and the Customs Union. All of the options being presented, including the PM’s Withdrawal Agreement, lead to this commitment being overturned and a Brexit betrayal.”

Both major parties promised to leave the single market and the Customs Union. All of the options being presented, including the PMs deal, lead to this commitment being overturned and a Brexit Betrayal.

Leaving without a deal is now by far the best option. – John Longworth pic.twitter.com/wto0pHjCTg

The Prime Minister’s comments in full:

I have just come from chairing seven hours of cabinet meetings focussed on finding a route out of the current impasse. One that will deliver the Brexit the British people voted for, and allow us to move on and begin bringing our divided country back together.

I know there are some who are so fed up with delay and endless arguments that they would like to leave with no deal next week. I’ve always been clear that we could make a success of no deal in the long term, but leaving with a deal is the best solution.

So we will need a further extension of article 50, one that is as short as possible, and one that will end when we pass a deal.

And we need to be clear about what such an extension is for, to ensure we leave in a timely and orderly way. This debate, this division cannot drag on much longer. It is putting members of parliament and everyone else under enormous pressure, and it is doing damage to our politics.

Despite the best efforts of MPs, the process that the House of Commons has tried to lead has not come up with an answer. So today I am taking action to break the logjam. I am offering to sit down with the leader of the opposition and to try to agree a plan that we would both stick to, to ensure we leave the European Union and we do so with a deal.

Any plan would have to agree the current withdrawal agreement. It has already been negotiated with the 27 other members, and the EU has repeatedly said that it cannot and will not be reopened.

What we need to focus on is out future relationship with the EU. The ideal outcome of this process would be to agree an approach on a future relationship which delivers on the result of the referendum, that both the leader of the opposition and I could put to the House for approval, and that I could then take to next week’s European Council.

However, if we cannot agree on a single unified approach, then we would instead agree to a number of options for the future relationship which we could pout to the house in a series of votes to determine which course to pursue.

Crucially, the government stands ready to stand by the decision of the house. But to make this process work, the opposition would need to agree to this too.

The government would then bring forth the withdrawal agreement bill. We would want to agree a timetable for this bill to ensure it is passed before the 27th of May, so that the United Kingdom need not take part in European Parliamentary elections.

This is a difficult time for everyone, passions are running high on all sides of the argument. But we can and must find the compromises that will deliver what the British people voted for.

This is a decisive moment in the story of these Islands. And it requires national unity to deliver the national interest. Pollak: No Democrat Wants to Be the ‘Moderate’… Yet