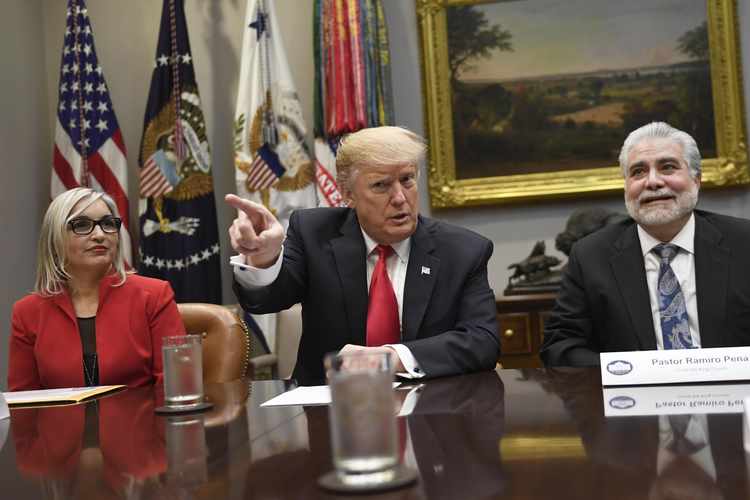 Get ready for the anti-Trump “resistance” to go truly loco, because new polling data indicates Hispanic support for the president is swelling, a trend that could seal his 2020 re-election victory.

When I helped lead the Trump Hispanic Advisory Council in 2016, our effort was widely derided by skeptics certain that the narrative of Trump as anti-Latino would doom his candidacy, particularly in heavily Hispanic states like Florida.  But that November, Hispanics saw through the media smears and Trump massively outperformed dour expectations, actually surpassing Mitt Romney’s 2012 percentage among Latino voters.

Since then, prospects have only improved – most importantly for the overall well-being of America’s Hispanic citizens, but also for the political prognosis of President Trump. So much good news erupted last week for the president with the conclusion of the Mueller inquiry that stunning new polling data was largely glossed over.  McLaughlin & Associates revealed that Hispanic approval for Trump in March jumped to 50%.  This number matched the January Marist/NPR/PBS survey that shocked cynics with its own 50% approval finding.  Even if those polls are too aggressive, February’s Morning Consult/Politico poll showed Trump’s Hispanic approval vaulting to a still-impressive 45%.

What explains this stunning trend?  I see three key factors:

The Economy – Hispanics neither desire nor expect a laundry list of deliverables from government, but rather seek the conditions to advance and prosper independently.  As the most statistically entrepreneurial demographic in America, Hispanics have thrived amid the Trump boom as regulatory and tax relief unleashes a small business surge.  Every American benefits from this new dynamism, but Hispanics most of all.  For example, the Hispanic jobless rate has now been below 5% for the last 11 months; prior to the Trump presidency, it had only been below 5% for one month ever (in 2006).   In addition, jobs are paying more.  Wage growth has finally ramped higher for all Americans, but especially for Hispanics, who now welcome wage growth far above workers on the whole. The American manufacturing renaissance drives much of this resurgence, as on-shoring, better trade deals, and rising optimism made 2018 the best year for factory jobs since the 1990s.

Immigration – Leftist politicians and their media allies wrongly assume that Hispanics espouse softness on immigration illegality.  In reality, a 2018 YouGov/Economist poll detailed that only 20% of Hispanics support the practice of “catch and release” of families crossing our border illegally.  Indeed, Hispanic Americans often suffer the worst, most immediate consequences of porous borders.  Too often, Hispanic workers must compete against unfair, illegal labor.  In addition, dangerous illegal aliens largely terrorize Hispanic citizens.  The tragic tales of MS-13 savagery, for example, normally involve Hispanic victims like Carlos Rivas-Majano, one of 27 people killed by the gang on Long Island, N.Y., in just the past three years. While elites like wannabe-Hispanic Robert Francis O’Rourke pontificate about open borders and tearing down existing border walls, the actual on-the-ground consequences flow to people with names like Hernandez, Cabrera, and Cortes.  Hispanic Americans have suffered too many totally preventable losses, such as slain Arizona police Sgt. Brandon Mendoza and young Los Angeles mother Sandra Duran, both murdered by illegal aliens living in America despite multiple prior arrests in the United States.

Social Issues – As the Democratic Party lurches left on social issues, the largely Catholic and Evangelical Hispanic community of America finds itself orphaned by the Democratic Party.  Increasingly, Democrat lawmakers and leaders support abortion up until the very day of birth (and even beyond), so Hispanics naturally gravitate to pro-life Trump.  A 2018 Pew poll, for instance, found that 61% of whites believe abortion should be legal in most/all circumstances, but only 44% of Hispanics concur.  In a separate survey, Pew also discovered that among Democrats, Hispanics are almost twice as likely to identify as “conservative” as non-Hispanics. Given these realities, the increasingly extremist Democratic Party practically invites electoral doom in 2020.

Looking state-by-state at the 2020 presidential race, the groundswell of Trump’s Hispanic popularity solidifies the president’s re-election prospects. A Trump gain to 40% of the Hispanic vote — a very realistic goal at this point – could effectively seal repeat wins in Florida, Georgia, North Carolina, and Arizona. Winning those states means the Democratic nominee must clean-sweep the 2016 Trump states of Pennsylvania, Michigan, and Wisconsin.  Moreover, even that upper Midwest sweep would not be enough if Trump’s ascent with Hispanics puts in play Nevada and Colorado, states with large Latino populations that Clinton won by low single digits last election.

For decades, Republicans have chased the “holy grail” of votes from Hispanics, a group that naturally should align with the conservative principles of entrepreneurial capitalism, strong borders, and a culture of life.  Paradoxically, the man whom the mainstream media most attempted to vilify as anti-Latino will, at last, truly welcome Hispanics to their rightful political home.

HUH? As Pelosi Heads to Taiwan, Biden-Harris Regime Spox John Kirby Drops This: ‘We Do NOT Support Taiwan Independence’ Trump Absolutely NUKES Jan 6 ‘Wrestling the Secret Service’ Story: “I Wasn’t Sure if I Should Be Honored Because I Felt Very Strong.”