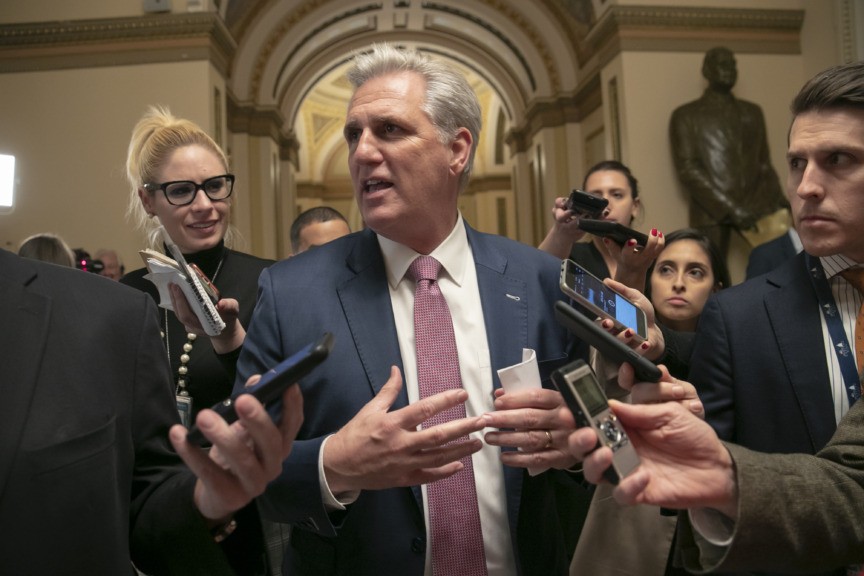 House Minority Leader Kevin McCarthy raised the most of any House Republican ever as he continues a flow of action on conservative issues.

McCarthy pulled in $23.06 million in the first quarter of 2019 through political committees, the most any House Republican has raised in one quarter.

House Republicans including McCarthy have relentlessly pushed in the House this year to bring a floor vote on the Born Alive Survivors Protection Act. Democrats have resisted Republicans’ efforts. “Protecting innocent life shouldn’t be a partisan issue and it shouldn’t be difficult. Infanticide is barbaric and the growing trend of Democrats advocating it is frightening,” McCarthy told Breitbart News in February.

The Republican Leader introduced a bill last October to fully fund President Donald Trump’s barrier along the southern border. “President Trump’s election was a wakeup call to Washington. The American people want us to build the wall and enforce the law,” he told Breitbart News at the time. “Maintaining strong borders is one of the basic responsibilities of any nation. For too long, America has failed in this responsibility.”

McCarthy has also been a part of the fight against the left’s socialism push. “The debate today is different than the one we had before with Republicans versus Democrats on the size of what government can be,” he told Breitbart News radio listeners last October. “It’s America versus socialism.”

Leader McCarthy blasted House Speaker Nancy Pelosi in February over her failure to reprimand fellow Democrats’ antisemitism. He called out “what some of the new Democrat members have been saying and attacking when it comes to people of the Jewish faith and others, it’s anti-semitic, their words and their language.”

“Republicans are on the offensive — and the American people are counting on it. After just one quarter the new Democrat majority is already wasting it away — spending more time appeasing the new Democrat socialists than solving problems,” McCarthy said upon release of the new fundraising numbers. “In fact, Democrats have underperformed the Republican House majority last Congress on nearly every measure.”

The senior congressional Republican also transferred or raised $12.5 million to the NRCC, supporting campaigns of other members, candidates, and other supporting organizations. Hoyer on Inflation Reduction Act: Federal Reserve ‘Is Really How You Deal with Inflation’ — But Bill Lowers Health Costs Pelosi’s Daughter: ‘Our Faves’ Could Be Implicated in Jeffrey Epstein Case