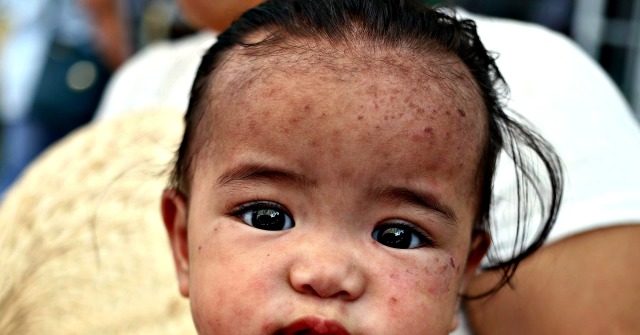 The Centers for Disease Control and Prevention (CDC) is reporting that more measles cases have been reported in the first three months of 2019 than in all of 2018, and the number of cases is the second highest since the disease was officially eliminated in the United States in 2000.

“These outbreaks are linked to travelers who brought measles back from other countries such as Israel, Ukraine, and the Philippines, where large measles outbreaks are occurring,” the CDC website states, adding that people should be vaccinated before traveling internationally.

The CDC website explains that the federal government started recording measles outbreaks in 1912, and in the first decade of record-keeping an average of 6,000 measles-related deaths were reported each year.

It wasn’t until vaccinations were developed and improved that the disease was declared eliminated in 2000 “thanks to a highly effective vaccination program in the United States, as well as better measles control in the Americas region,” the CDC reported.

The reasons for the increase in measles outbreaks is due, in part, to international travel and a growing number of people who are opting not to have their children vaccinated against the disease and other communicable diseases.

Dr. Alan Melnick, the public health director for Clark County, Washington said a contributing factor of the outbreak was people in the county who had not been vaccinated.

“Last week, in an effort to contain an outbreak of measles that began in October, Rockland County, New York, banned unvaccinated people under age 18 from public places,” CNN reported. “As of Friday, the county reported 153 confirmed cases, though state health officials noted that additional cases have not been reported.”

But while outbreaks in the states of Washington and New York have made headlines, measles outbreaks in the first three months of 2019 have also been reported in Arizona, California, Colorado, Connecticut, Georgia, Illinois, Kentucky, Michigan, Missouri, New Hampshire, New Jersey, Oregon, and Texas.

“Measles is a highly contagious virus that lives in the nose and throat mucus of an infected person. It can spread to others through coughing and sneezing,” the CDC website states. “Also, measles virus can live for up to two hours in an  airspace where the infected person coughed or sneezed. If other people breathe the contaminated air or touch the infected surface, then touch their eyes, noses, or mouths, they can become infected.”

“Measles is so contagious that if one person has it, up to 90 percent of the people close to that person who are not immune will also become infected,” the website states.

The CDC recommends children get two doses of the measles — or MMR vaccine — starting with the first dose at 12 to 15 months of age, and the second dose at four to six years of age. Cheney: Trump 'Engaged in the Most Serious Misconduct' of Any President in History