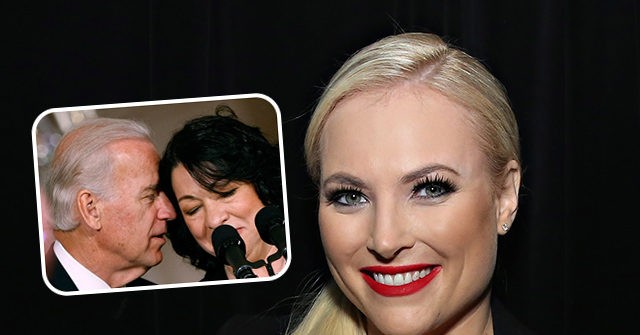 Biden is facing intense blowback after two women came forward in recent days alleging that the former vice president made them feel uncomfortable at political events. Last week, Lucy Flores, a former Nevada Democrat Assemblywoman, accused the 76-year-old of kissing the back of her head and smelling her hair at a campaign fundraiser in 2014. Flores called the interaction “problematic” and disqualifying from running for president. On Monday, Amy Lappos, a former congressional aide to Rep. Jim Himes (D-CT) alleged Biden rubbed his nose on hers during a 2009 event in Greenwich, Connecticut. “This is the Al Franken thing all over again,” Lappos said of Biden’s behavior to the Washington Examiner.

In wake of the allegations, McCain took to social media to praise her late father Sen. John McCain’s (R-AZ) former Senate colleague, tweeting: “Joe Biden is one of the truly decent and compassionate men in all of American politics. He has helped me through my fathers diagnosis, treatment and ultimate passing more than anyone of my fathers friends combined. I wish there was more empathy from our politicians not less.”

Joe Biden is one of the truly decent and compassionate men in all of American politics. He has helped me through my fathers diagnosis, treatment and ultimate passing more than anyone of my fathers friends combined. I wish there was more empathy from our politicians not less.

In a statement Sunday, an apologetic Biden contended that he “never” touched anyone inappropriately, yet “may not recall these moments the same way.”

” I will fight to build on the work I’ve done in my career to end violence against women and ensure women are treated with the equality they deserve,” the former vice president said in a statement. “I will continue to surround myself with trusted women advisers who challenge me to see different perspectives than my own. And I will continue to speak out on these vitally-important issues where there is much more progress to be made and crucial fights that must be waged and won.”

On Monday, Biden spokesman Bill Russo issued another, more aggressive statement addressing the controversy surrounding photos of Biden interacting awkwardly with women and children, dismissing them as “smears and forgeries” that have “existed in the dark recesses of the Internet for a while.”

“The Vice President has issued a statement affirming that in all the many years in public life that he has shaken a hand, given or received a hug, or laid his hand on a shoulder to express concern, support; or reassurance, he never intended to cause discomfort,” said Russo. “He has said that he believes that women who have experienced any such discomfort, regardless of intention, should speak and be heard, and that he will be among those who listen.

“But the important conversation about these issues are not advanced, nor are any criticisms of Vice President Biden validated, by the continued misrepresentation of the Carter and Coons moments, or a failure to be vigilant about a cottage industry of lies,” he added.

Meanwhile, Biden’s potential 2020 rivals have taken a different line than McCain, saying that the allegations should be taken seriously. Sen. Elizabeth Warren (D-MA) said she believed Flores and that the former vice president “needs to give an answer” in response to the allegations. Sen. Kirsten Gillibrand (D-NY) said “Lucy Flores felt demeaned, and that is never okay. If Vice President Biden becomes a candidate, this is a topic he’ll have to engage on further.” In a Sunday interview with ABC News This Week, Sen. Amy Klobuchar (D-MN) stated she has no reason to doubt Flores’ account. “I have no reason not to believe her,” she said. “And I think we know from campaigns and from politics that people raise issues and they have to address them and that’s what he will have to do with voters if he gets into the race.”