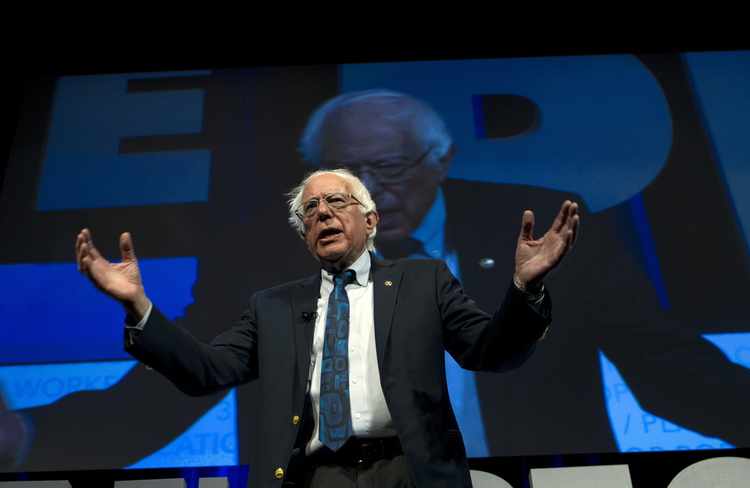 Ahead of his 2008 election, Barack Obama promised Democrats they were on the cusp of “fundamentally transforming the United States of America.” More than a decade later, eight of his party’s presidential hopefuls offered some iteration of the same promise to the progressive faithful gathered Monday at the We the People forum in Washington.

Hosted by the Communications Workers of America, Planned Parenthood, and the Sierra Club, the event showcased calls for universal health care, attainable higher education regardless of the ability to pay, and a version of the Green New Deal becoming law. This liberal orthodoxy was repeated — and repeatedly cheered — so often that, at times, it was difficult to distinguish between the Democrats lining up to challenge President Trump: former HUD Secretary Julian Castro, former Rep. Beto O’Rourke, Gov. Jay Inslee, Sens. Elizabeth Warren, Amy Klobuchar, Cory Booker, Bernie Sanders and Kirsten Gillibrand.

But those being preached to were largely unsatisfied. It is not enough to plug policy, explained Kim Baker. The retired teacher, who travelled from South Carolina for the event, told RealClearPolitics she wants a candidate who will “tackle the institutions.”

But this step is only part of the solution, those attending made clear. Professional politicos in suits, union members wearing hoodies, and mothers with babies on their hips told RCP the problem is much larger than changing the way presidents are elected.

“A lot of people thought, more or less, that democracy was working, that we were making progress moving forward, and that something out there in our institutions was going to prevent someone called Donald Trump from succeeding,” said Ezra Levin. “It didn’t happen.”

“So there is this general recognition that the rules are rigged, that the system itself is broken and needs to be cured,” continued the executive director of Indivisible, a national grassroots network.

The election of Trump has called everything into question for liberals like Levin who describe the president as “a virus” that a healthy system of government would have otherwise rejected.

Hector Figueroa, president of 32BJ Service Employees International, said members of his union were baffled when Hillary Clinton won the popular vote but lost the election. “Every vote doesn’t count,” he concluded, “if there is a structure that supersedes the will of the people.”

Kevin Brown, vice president of that same union, agreed and took it a step farther: “There is nothing sacrosanct that shouldn’t be thought about when you compare it to the racial, economic, and environmental injustice in this country.”

According to the activists interviewed, this includes a whole host of radical reforms. Some want to expand the number of representatives in the House of Representatives to make representation more equitable. Others want to pack the Supreme Court with more justices to tip the judicial balance in a liberal direction. Many want to expand citizenship altogether.

When asked if it is prudent to do away with original designs of the Constitution, like the Electoral College, meant to protect the rights of voters in less populous states, Baker replied, “I can’t get behind a system that is rooted in racist ideals and that was founded on a compromise about slavery.”

Levin echoed this: “There is a multi-decade conservative campaign to systematically undermine democracy, and make it less reflective of the will of the people.” The Republican goal, he added, is  “to take us not just back to the 20th century but, in some cases, to the 19th century.”

Aaron McCall, a graduate student from California, said Republicans have been successful in this regard and that “our democracy has been broken so much so that Congress doesn’t reflect what people are looking for.”

If the upper chamber did away with the legislative filibuster, the parliamentary procedure that can block any bill without 60 votes, Gillibrand said the current Senate “would undermine women’s rights, gay rights, clean air and clean water legislation across the board.” She would consider backing the move if elected but warned, “We have a risk that if you are for this today, it may be done before you have the majority, and what we may lose is real.”

Booker isn’t sold on that idea, either. The New Jersey lawmaker said that “if Mitch McConnell, Paul Ryan and Donald Trump had two years like they just had without me in the Senate and other noble progressives who fought them with you to prevent the taking away of health care, we would have lost that battle—Obamacare would have been gone.”

Other progressive favorites aren’t feasible, according to Sen. Bernie Sanders. The self-described democratic socialist from Vermont wasn’t on board with packing the Supreme Court. Like Gillibrand and Booker, Sanders warned that the progressive reforms of today could become the stumbling blocks of tomorrow.

“My worry,” he said in response to a question, “is that the next time the Republicans are in power, they’ll do the same thing.”

The frontrunner among declared candidates floated a compromise: “What I do think may make sense is, if not term limits, then rotating judges to the appeals court as well, letting them get out of the Supreme Court and bringing in new blood.”

Trump: We Took Action To Stop A War, Not Start One