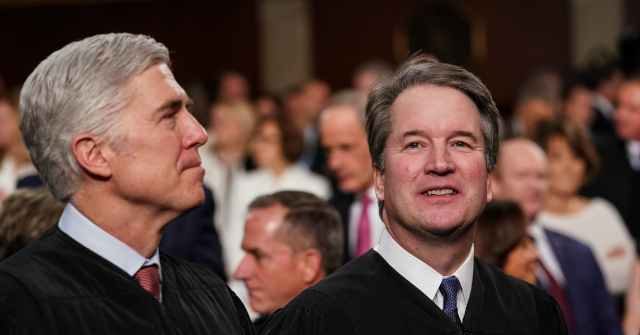 Students at George Mason University (GMU) are demanding that the school terminate its three-year contract with Justice Brett Kavanaugh to teach as a distinguished visiting law professor at GMU’s Antonin Scalia Law School.

A course entitled “Creation of the Constitution” will be taught by Justice Kavanaugh and law school professor Jennifer Mascott, who is also the Justice’s former law clerk, according to the university’s student newspaper, Fourth Estate.

In response to the campus news regarding Justice Kavanaugh, a student-led advocacy group called “Mason For Survivors GMU” created a petition calling on the university to terminate Justice Kavanaugh’s contract, among other demands.

The petition begins by accusing GMU of having “a historic amount of institutional negligence” with regards to supporting “survivors of sexual assault and the student body as a whole,” adding that among these supposed “failures” is the hiring of Justice Kavanaugh — a bizarre conflation, given that there has never been any evidence of Kavanaugh having ever committed sexual assault.

“Since the announcement of the hiring of Supreme Court Justice Brett Kavanaugh, we have mobilized and are ready to take the necessary action to obtain the following demands,” continues the petition, before listing its first demand, which is to “Terminate AND void ALL contracts and affiliation with Brett Kavanaugh at George Mason University.”

The petition goes on to list five additional demands, which include a town hall to “discuss Kavanaugh’s hiring and implications for students and the university,” Title IX policy reform, campus police reform, implementing a “Gift Acceptance Policy in order to prevent outside donor influence” by next month, and providing “better resources for student survivors of sexual assault.”

The petition has garnered over 2,000 signatures thus far. Additionally, an associate professor at GMU’s Schar School of Policy and Government chimed in on Twitter.

GMU: we are a serious university, don’t you realize we officially became R1?

“Let’s hire a rapist who repeatedly lied to Congress to teach law,” tweeted professor Ahsan Butt, mimicking what he believes the university thought of itself when it made the decision to hire Justice Kavanaugh.

“I respect the views of people who disagreed with Justice Kavanaugh’s Senate confirmation due to questions raised about his sexual conduct in high school. But he was confirmed and is now a sitting Justice,” said GMU’s university president Ángel Cabrera in a statement on Wednesday.

“The law school has determined that the involvement of a U.S. Supreme Court Justice contributes to making our law program uniquely valuable for our students,” continued Cabrera, “This decision, controversial as it may be, in no way affects the university’s ongoing efforts to eradicate sexual violence from our campuses.”