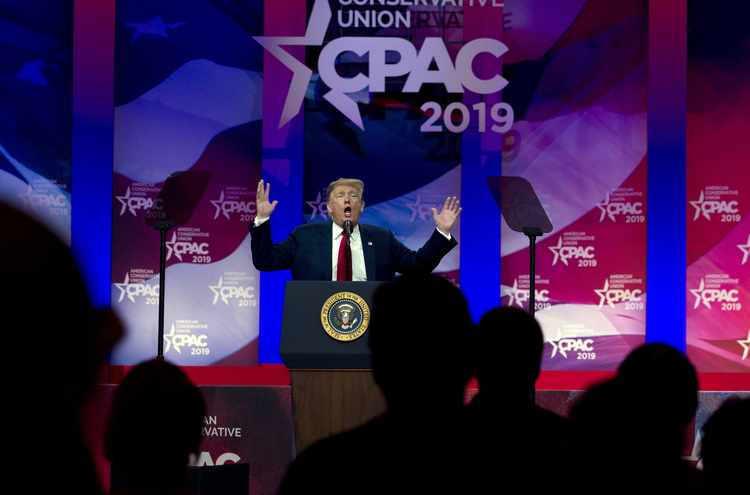 Donald Trump is not a conventional conservative. Far from it. He’s a populist of the right. His strong appeal to conservatives lies in his nationalism, tax cuts, deregulation, and appointment of originalist judges.

Unlike Ronald Reagan, who had well-formed political ideas, Trump’s notions about public policy come from gut instincts, reinforced by cheering crowds. Their common thread is “Don’t tread on me.”

Trump’s disdain for tradition is the opposite of orthodox conservativism. It is most visible in the wrecking ball aimed at NATO and other allies. If you are rich enough and want our military protection, he says, then pay up or forget it. Prove you deserve our protection. Show us the money.

Trump’s threat to walk away is more credible than that of previous presidents because he is instinctively closer to Robert Taft’s isolationism than to Arthur Vandenberg’s internationalism. The Taft-Vandenberg debate in the late 1940s settled Republican foreign policy for the next 60 years. Vandenberg, who chaired the Senate Foreign Relations Committee, led bipartisan support for President Harry Truman’s policies, including the Marshall Plan and forming NATO. The party’s stance was sealed in 1952 when Dwight Eisenhower defeated Taft for the presidential nomination.

Republicans remained internationalist on both security and trade throughout the Cold War, the “Unipolar Moment” of the 1990s, and the Global War on Terror after 9/11. That consensus shattered in the endless mess of Afghanistan and Iraq and the hollowing out of U.S. manufacturing employment. The Democratic Party backed away from those policies even sooner.

As a result, there is no consensus today on America’s proper role in the world. Our allies know it and are understandably nervous. Trump, a tough negotiator, is exploiting their anxiety to strike better deals for American defense support. That only works if allies believe he might actually pull back. They do, and so do internationalists in both parties. They are also worried about trade policy, where his strategy is similar.

Trump’s personal style adds to those worries, including those of conservatives. Many are repulsed by his crudity, thin-skinned nature, and vitriolic personal attacks. They fret as he shreds established norms. They oppose his micro-interventions in the economy (“don’t close that GM plant”), which are the opposite of free-market economics.

But—and this is crucial—conservatives and many independents recognize Trump’s biggest achievement, beyond strengthening the economy and rebuilding the military, is his persistent effort to roll back the administrative state, with its endless regulations and executive orders. The agencies that make the rules also enforce and adjudicate them. The result is fiat law—undemocratic, unaccountable, and unbearably expensive to fight. (If you think that’s also a major popular complaint about the European Union, you are correct.)

To curtail this administrative overreach, Trump needs to downsize the permanent bureaucracy, pass laws that require congressional approval for major regulations, and keep appointing judges who will rein in bureaucratic excess. Eliminating specific regulations is not enough. The next Democratic president will simply reimpose them.

Trump’s progress on judges is obvious—and consequential. That’s why Democrats are fighting so tenaciously. The latest battle, after Brett Kavanaugh’s Supreme Court appointment, was Neomi Rao’s nomination to the D.C. Circuit. She proved her commitment to deregulation while heading the White House Office of Information and Regulatory Affairs. Now she sits on the appellate court that hears those cases.

Trump’s determination to claw back Washington’s bureaucracy is beloved by conservatives, but it poses a curious dilemma. It took eight decades to ratchet up the government’s mammoth size and scope. Rolling it back swiftly and dramatically is what conservatives want substantively. But abrupt changes are what conservatives hate procedurally. They favor incremental change.

“Build on what we already have,” say these procedural conservatives. “That’s the surest foundation for improvement.” No one can anticipate the effects of large, disruptive changes. They might be disastrous. Edmund Burke first made that argument in 1790. His devastating critique of the French Revolution set the template for modern conservativism.

Unfortunately for modern conservatives, that kind of incrementalism would hardly dent America’s huge, intrusive government. It would do nothing to stop its regrowth after Trump leaves. That’s why “substantive conservatives” want to pare down the state now. The opportunity might be fleeting.

These are meaningful differences among conservatives. Yet they will fade to insignificance when Democrats nominate another big-government candidate. Faced with that alternative, conservatives of all stripes will back Trump. The only exceptions are those who despise him.

The president’s shortcomings offer Democrats a real opportunity. They seem determined to fumble it. Most candidates are sucking up to the left-wing base and arguing for huge, structural changes, everything from packing the Supreme Court to abolishing private health coverage. Their most daring ideas, such as the Green New Deal and “Medicare for All,” are recipes for fiscal apocalypse and totalizing government control. Their intolerance of dissent has made them the Party of Social Justice Church Ladies.

More centrist candidates are drifting left, too. Their reorientation may appeal to primary voters, but it will be a huge impediment in November. Ultimately, they are still selling Lyndon Johnson’s Great Society, now with more programs, more funding, and more taxes to pay in support of them. The ideas are stale, but there are two bigger defects: They cost too much and advocates cannot explain why the old programs failed.

If that’s what the Democrats have on offer in 2020, they won’t just lose conservatives and right-of-center independents. They’ll lose the election, unless there’s a recession.

If Trump wins, he will continue doing what no president has even attempted since Franklin Roosevelt: fundamentally shrinking the vast, centralized power of the administrative state. It’s a monumental task. But, for conservatives, none is more important.

Charles Lipson is the Peter B. Ritzma Professor of Political Science Emeritus at the University of Chicago, where he is founding director of PIPES, the Program on International Politics, Economics, and Security. He can be reached at charles.lipson@gmail.com.