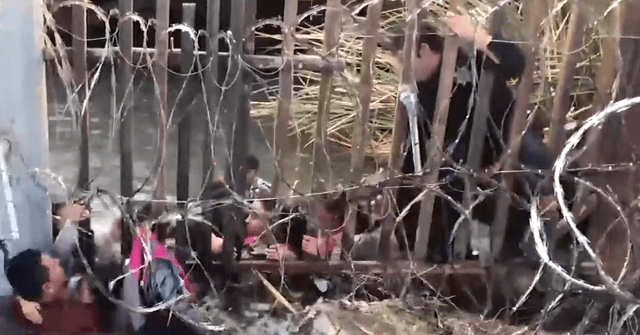 A video published by ABC News shows a group of migrants abusing young children who appear to be in no imminent danger by forcing them under a razor-wire lined border fence in a water-filled ditch. The children scream in terror as the adults force them into the cold water and submerge them while passing them under the concertino wire-lined border barrier.

“The blades of the concertina wire ensnare shirts and jackets of asylum seekers who are dunked into the 55-degree water, wading through the drainage ditch just yards from the San Juan del Rio Colorado border crossing,” ABC News’ Matt Gutman wrote. “One cannot easily make out faces, only wet fists gripping the steel slats and the piercing screams of children. On the other side, U.S. Border Patrol agents are filming and shouting in Spanish, ‘Go back…don’t do this. Look at the child! Hey! Be careful with the child! Be careful with the child!’”

A spokesman for U.S. Customs and Border Protection told the reporter that policy prevents U.S. officials from intervening. However, agents can be heard yelling “You’re going to traumatize this poor child. She’s crying. … if she crosses the child can drown.”

The children did not appear to be in any immediate danger before being forced into the terrifying situation by the adult migrants. Mexican police can be seen attempting to stop the abusive behavior as U.S. Border Patrol agents watched from the other side of the fence, paralyzed by regulations and policies prohibiting their intervention, ABC News reported.

Breitbart News reached out to Yuma Sector Border Patrol officials for a reaction to the video.

“Yuma Sector does not condone the activity seen in the video,” Yuma Sector Special Operations Supervisor Vinney Dulesky told Breitbart News on Tuesday. “We work extremely hard to ensure the safety of everyone to include those we apprehend.”

“While child endangerment laws are enforced by the state,” Dulesky explained, “the Border Patrol does and has worked with our local agencies and departments to bring justice to these types of offenses. Unfortunately, we are not in control of the responses or outcomes of those requests.”

The attempted intervention by Mexican police is detailed by the news outlet’s reporter. “This video shows three Mexican police officers intervening that December morning,” Gutman wrote. “The first wades into the water, moving his way toward the screaming children. Another is edging his way along the bottom of the border fence toward the hole through which the asylum seekers went under and through.”

Finally, one of the Mexican police officers succeeds in taking a child out of the arms of a mother and back to safety on the Mexican side of the border, the article stated. Another officer makes his way to the hole and stops anyone else from entering.

While some of the people in the video appear to be parents of the children, Border Patrol officials place the blame squarely on the transnational criminal organizations that bring the migrants to these remote and dangerous crossing locations.

“This is another example of the transnational criminal organization’s disregard for safety and wellbeing of the children they smuggle,” Supervisor Dulesky stated. “They will do whatever is necessary to get their product through the border, ensuring their payment.  This further demonstrates the need for updated infrastructure on our borders.”

The incident in the recently released video occurred in late December, ABC reported.

Elsewhere on the border, Del Rio Sector Border Patrol agents rescued a migrant woman and her three children as she attempted to force them across the swiftly moving water of the Rio Grande River, Breitbart News reported.

Eagle Pass Station agents patrolling the Rio Grande River in an airboat encountered a woman and three small children who had been swept away in the strong current as they attempted to illegally cross the border river, Del Rio Sector Border Patrol officials reported. Observing the four people in distress in the water, the agents quickly maneuvered their boat into position and pulled the woman and her three children to safety.

“Migrants continue to ignore the hazards and risk their lives attempting to cross the Rio Grande River,” Del Rio Sector Acting Chief Patrol Agent Louie W. Collins said in a written statement. “Had our Border Patrol agents not been in the area to respond quickly, the woman and her children would have more than likely drowned.”