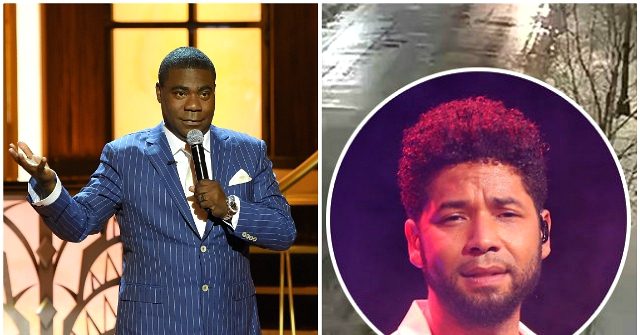 Actor-comedian Tracy Morgan tore into embattled Empire actor Jussie Smollett during his appearance on the The Tonight Show.

Tracy Morgan riffed on the alleged attack suffered by actor Jussie Smollett which supposedly occurred in downtown Chicago, at 2 a.m., during one of the winter’s coldest weeks.

Morgan found the idea laughable that two white men allegedly carrying bleach and a noose were prowling around Chicago during one of the coldest days of the year just looking for a gay black man to beat up.

“First of all, racist people don’t be jumping nobody in the polar vortex. It’s too cold. You be racist in the spring,” Morgan joked with The Tonight Show host Jimmy Fallon.

Morgan added that you just “don’t fake a hate crime.”

Fallon asked if Morgan buys Smollett’s story, but the comedian replied, “Nah man! First of all, racist people don’t be jumping nobody in the polar vortex. It’s too cold. You be racist in the spring.”

Morgan also scoffed at the idea that “racists” would know who Jussie Smollett even is.

Morgan also thought it was strange that even after supposedly being beaten up, Smollett was still seen on video carrying his Subway sandwich. “I think it was pepperoni and cheese, I don’t know,” Morgan joked.

Morgan is the second comedian to slam Smollett’s hate crime story. Only a few days before, comedian Chris Rock went on the attack as he hosted the NAACP Image Awards on Saturday.

“They said no Jussie Smollett jokes,” Rock said. “I know. What a waste of light skin. You know what I could do with that light skin? That curly hair? My career would be out of here. Fucking running Hollywood.” Was Mueller Probe Driven by Political Bias vs. Trump?