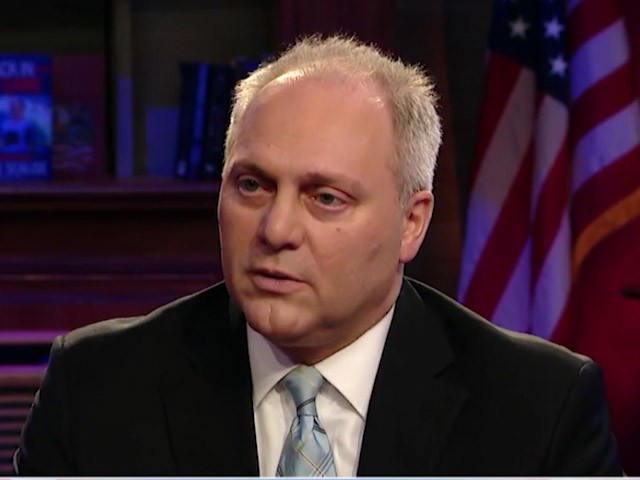 House Republican Whip Steve Scalise of Louisiana held a press conference Tuesday to announce his intention to file a discharge petition that he hopes enough Democrats will sign in order to force a vote on a bill that would protect babies who survive abortion from infanticide.

You deserve to know: Where does your representative stand on stopping infanticide? I’m filing a discharge petition TODAY to bypass Pelosi & force every member to go on record & tell the American people EXACTLY where they stand on this barbaric practice. #LetUsVote #EndInfanticide pic.twitter.com/n2Zr8TYEm6

Scalise was joined by House Minority Leader Kevin McCarthy of California; Rep. Ann Wagner of Missouri, who introduced the Born Alive Abortion Survivors Protection Act; Republican Conference chairwoman Liz Cheney of Wyoming; and other pro-life members of Congress ahead of his intended filing of the discharge petition.

Today is the day members of the House have the opportunity to tell their constituents exactly where they stand on infanticide by signing the discharge petition offered by @SteveScalise. @RepAnnWagner #BornAliveAct #EndInfanticide

When we’re talking about protecting newborns, we’re no longer debating the abortion issue. I’m proud @SteveScalise is filing a discharge petition TODAY to force a vote on the #BornAliveAct. Soon, Americans will know where each of us stands on infanticide. https://t.co/y8LfR7C235

Today I will sign @SteveScalise‘s discharge petition to #LetUsVote on @RepAnnWagner‘s legislation to #EndInfanticide. We should know where all Representatives stand on this issue. pic.twitter.com/AlHqkmZPSv

According to Scalise’s office, only a simple majority – 218 signatures – is required for the discharge petition to be successful to force a vote. The petition must receive the signatures of 21 Democrats to join those of Republicans to move the Born-Alive bill to the floor of the House. Three Democrats have already co-sponsored the legislation – Reps. Dan Lipinski of Illinois, Henry Cuellar of Texas, and Collin Peterson of Minnesota.

House Democrat leaders have now refused more than 25 requests by members to vote on the legislation.

Abortion survivors Melissa Ohden, Claire Culwell, and Gianna Jessen were present at the press conference, as was the pro-life Susan B. Anthony List’s (SBA List) national campaign chair Jill Stanek, and Dr. Christina Francis, board chair of the American Association of Pro-Life Obstetricians & Gynecologists (AAPLOG) and an associate scholar with the Charlotte Lozier Institute.

SBA List President Marjorie Dannenfelser said Democrats are out of touch with the vast majority of Americans on the issue of protecting babies from botched abortions from infanticide.

“Shame on Nancy Pelosi and House Democrats for repeatedly refusing to allow a vote on this compassionate, common-ground bill,” she said in a statement. “Seventy-seven (77) percent of voters nationwide want Congress to protect babies who survive failed abortions, but Democratic Party leaders have doubled down on extremism.”

“We urge all members of Congress to sign the petition,” Dannenfelser continued. “The American people deserve to know where their representatives stand on infanticide.”

“A vote for the discharge petition is a vote to protect infants from infanticide,” said SFL Action President Kristan Hawkins. “Where a child is born should not determine whether they can be left to die.”

Hawkins added the vote on the Born-Alive Act will be a scored vote for the pro-life movement:

This vote will be remembered. It is inhumane to stand by and allow babies born during botched abortions to be treated as trash. This is not a “life of the mother, health of the mother” situation either, as the infant lies alone and in need of care. The Pro-Life Generation cares about these children, and we ask members of the House to take a stand for them today.

A recent poll commissioned by Students for Life of America found about seven in ten millennials – now the nation’s largest voting bloc – supported restrictions on abortion. Additionally, the poll found only seven percent shared the position of the Democrat Party – abortion without any restrictions and funded by tax dollars.

In February Senate Democrats voted against the Born-Alive legislation introduced in that chamber by Nebraska Republican Sen. Ben Sasse. The bill failed as a result since it required a 60-vote supermajority for approval and Republicans could only obtain 53 votes for it.

Other pro-life leaders weighed in on the legislation.

“Only about half of states have laws on the books that mandate physicians provide medical care in cases of an infant born alive after at attempted abortion, and protections that do exist for these babies are at risk, as we have seen in New York, Rhode Island and other states,” said Jeanne Mancini, president of March for Life. “We applaud Representatives Scalise and Wagner for ensuring that our elected officials’ positions on infanticide are on the record.”

The Catholic Association’s senior policy advisor, Maureen Ferguson referred to House Speaker Nancy Pelosi’s blocking of a vote on the bill as “shocking” and “inhumane.”

“We implore members of the House to listen to the powerful voices of abortion survivors who are on Capitol Hill this week to support the bill,” she said in a statement. “Now adults, they have been speaking out to tell their stories.”