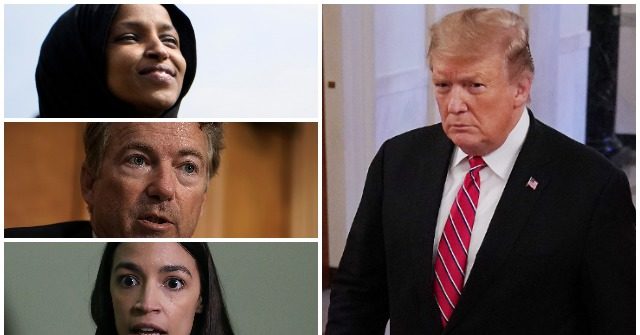 Harsh critics of President Donald Trump like Reps. Alexandria Ocasio-Cortez (D-NY) and Ilhan Omar (D-MN) have put aside their differences with the president to join a bipartisan letter backing Trump’s announced plans to withdraw troops from Syria now that Islamic State has been defeated.

“We write in bipartisan support of your announcement of the start of a ‘deliberate withdrawal’ of U.S. military forces in Syria, and we welcome the completion of this process within the next six months,” the letter to Trump, obtained by Breitbart News ahead of its public release, reads. “The 2015 introduction of U.S. military forces into hostilities in Syria was never approved by Congress, in violation of the Constitution and the War Powers Resolution of 1973. We believe that the stated intention of withdrawing our forces is appropriate, and we look forward to the orderly return of our service members from this theater of conflict.”

The letter continues by laying out a pathway for what the bipartisan coalition is urging Trump to do as he withdraws troops from Syria.

“While it is essential to accomplish the announced withdrawal, we urge your Administration to couple the process of a phased removal of U.S. troops with an increased focus on diplomacy to ensure minimal disruption and prevent loss of life,” the bipartisan group of members wrote to Trump. “Additionally, we recommend direct, robust engagement and coordination with both the U.S. allies and other regional governments to ensure the safety of Syria’s civilian populations and avert the resurgence of ISIS. We agree with your aim of averting a Turkish military assault on Syria’s Kurds, and U.S. leverage—such as conditioning weapons sales to Turkey—can achieve this outcome.”

The letter concludes by laying out how this bipartisan coalition stands ready to work with Trump to end other conflicts and wars, particularly in Afghanistan.

“It is long past time to rein in the use of force that goes beyond congressional authorization, and we look forward to pursuing this longstanding bipartisan objective with your Administration,” the letter concludes. “Finally, we hope this will serve as a model for ending hostilities in the future—in particular as you and your Administration seek a political solution to our involvement in Afghanistan.”

In a press call with reporters including Breitbart News on Wednesday morning announcing the letter, Sen. Paul laid out how he hopes this is a turning point for the president where he can work with even some of his most ardent critics in the wake of the end of the Special Counsel Robert Mueller’s investigation that ended up finding no collusion between Trump or his campaign and the Russians.

“I think this is a continuation of the bipartisan movement in Congress to snatch back power that the Constitution gave to Congress, but also to try to get beyond the politics of the moment—whether the president is a Republican or a Democrat,” Paul said. “As most of you know, I’ve been supportive of President Trump on a lot of fronts, but I’ve also been unafraid to stand up on principle and oppose him at times. This is a great example of Democrats who have obviously not been supportive of the president willing to stand up and have the courage to say ‘there is policy though that we do support.’ That’s the withdrawal of troops from Syria. So I think this is a turning point to maybe try to get beyond some of the politics of the investigations of the last two years, and try to join forces on some issues. In this case, it’s supportive of the president. In Yemen, it’s obviously supportive of restricting the president. But the overall focus is is there is a bipartisan movement to have Congress decide when we go to war and in this case it aligns with the president’s announcement to remove U.S. troops from Syria.”

Paul added on the press call that he thinks the signature array on this letter backing Trump on Syria is a “good mix showing that right and left can come together even to rise above the politics of the moment to say that this is right, the issue of whether we should in Syria, that the president is right and we shouldn’t stay there forever the same way we’ve stayed forever in other places.”

Paul said too that he believes this bipartisan coalition, which Khanna discussed in a Breitbart News exclusive earlier this week, “has been building for several years.”

“We just had a luncheon this week talking about getting out of the war in Afghanistan where Sen. Udall, a progressive Democrat, and myself got together—it was hosted by a progressive magazine The Nation and a conservative magazine The American Conservative,” Paul said in response to a question from Breitbart News on Wednesday’s press call. “So I think there is legs to this. So I think over time the idea of having a caucus for bipartisan foreign policy—for a saner foreign policy—I think is a possibility and it would have more impact if we crossed party lines. I think you did see people cross party lines on Yemen, you see people coming across party lines on protecting the privacy of your phone calls and Fourth Amendment searches, so I think on privacy and foreign policy there is a sort of a left and right coming together that I think is going to continue and will grow over time.”

Khanna, who is co-leading this letter with Paul and did an exclusive interview with Breitbart News on these efforts published earlier this week, added in a quote provided to Breitbart News about the letter that it is time for Congress to be involved in these decisions on foreign policy.

“The president cannot pursue a foreign policy agenda without the advice and consent, let alone the support, of the Congress,” Khanna said. “Thanks to Sen. Paul for joining me in bringing an end to these wars—the constitution isn’t partisan.”

Tom Cotton: Democrats Will Be Held Accountable for School Lockdowns