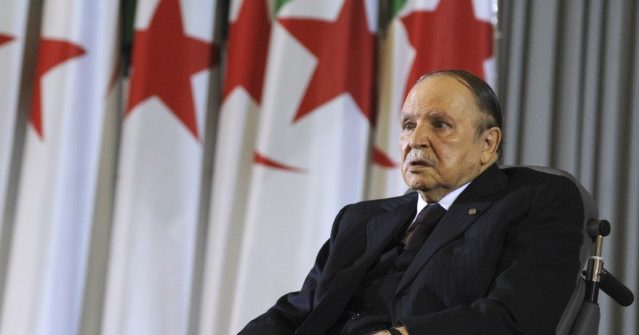 Algerian President Abdelaziz Bouteflika resigned on Tuesday after months of turmoil, street demonstrations demanding his ouster, and finally the military taking steps to force him out by questioning the sick and reclusive 82-year-old president’s fitness for office. The question of what comes next is on the minds of both international observers and Algerians, who continued demonstrating in the streets after Bouteflika’s announcement, demanding the rest of the corrupt political elite depart as well.

Bouteflika’s increasingly desperate effort to hang on to his office over the past year went from attempting to run for re-election again, to bowing out of the elections and then canceling them entirely, to positioning himself as a “caretaker” who would depart sometime next year after a new government was established, to insisting that he would stay until his final term formally expired at the end of April.

The head of Algeria’s military, Army Chief of Staff Lt. Gen. Ahmed Gaed Salah, stepped in on Tuesday and ended Bouteflika’s run by urging Algeria’s constitutional council to declare the president unfit for office. Salah said alternative proposals to keep the incumbent in power were intolerable efforts to undermine “constitutional legitimacy” and the prestige of the “national army.” Bouteflika saw the handwriting on the wall and resigned soon afterward.

The Algerian constitution stipulates that the chairman of the upper house of parliament, currently Abdelkader Bensalah, will become the acting president for no longer than 45 days while a permanent successor is chosen. Bensalah is a close ally of Bouteflika whose tenure is unlikely to be tolerated for long. In fact, many of the protesters are signaling they won’t tolerate Bensalah and his caretaker government at all.

Bouteflika appointed a different caretaker president last weekend, former Interior Minister Noureddine Bedoui, but the demonstrators seem uninterested in accepting his legitimacy, in part because he is accused of committing election fraud to keep the Bouteflika machine in power.

At the moment, there are few hints of who that successor might be, or how they will be selected. Protesters are still thronging the streets, pausing to celebrate Bouteflika’s departure before resuming demands for the entire political elite to step down as well.

“This is just a little victory. The biggest is still to come,” a demonstrator told the BBC after Bouteflika announced his resignation.

“God willing, we will have a 100% democratic transition, this is very important. We need to remove the whole previous regime and that is the hardest thing,” said another.

“We want a president who understands what we want. We want to live here, not to migrate to Europe,” a young demonstrator told Reuters, laying out the stakes in the great Algerian game.

Unemployment for young Algerians is already running at 25 percent, the decrepit statist system is highly resistant to the sort of liberalization needed for economic renewal, and dark Islamist forces are eager to take advantage of the chaos created by Bouteflika’s ouster.

Voice of America News noted on Tuesday that Islamists “appear to be participating heavily” in street protests, and their leaders are rejecting the interim government plan put forward by the Algerian military. The Russians, who have their own interests in Algeria to protect, are warning about Islamist influence on the protest movement, anticipating a situation like the 2011 “Arab Spring” where hardline Islamists are the only group with the discipline and organizational muscle to take over after a doddering kleptocracy collapses.

The demonstrators want a complete overhaul of Algerian politics that is unlikely to please General Salah, as it would reduce the political influence of the military. Algerians complain their government is thoroughly corrupt and serves the interest of a rich and powerful cabal dubbed “Le Pouvoir” in French. Several members of this group were relieved of their passports or arrested outright earlier this week.

Some of the protesters expressed anger at Bouteflika’s resignation, despite having long demanded it, because they noticed the timing of General Salah’s political intervention and suspect Le Pouvoir have merely decided to hustle the ailing Bouteflika offstage and replace him with another flunky. Some think the military is staging a coup and angling to replace Bouteflika with their own preferred candidate.

Reuters suggested a plausible successor to Bouteflika, at least temporarily, might be former prime minister Ahmed Benbitour. Benbitour has respected economic credentials, is not a functionary of Bouteflika’s party, and previously resigned his post out of frustration that he could not implement vitally necessary reforms.