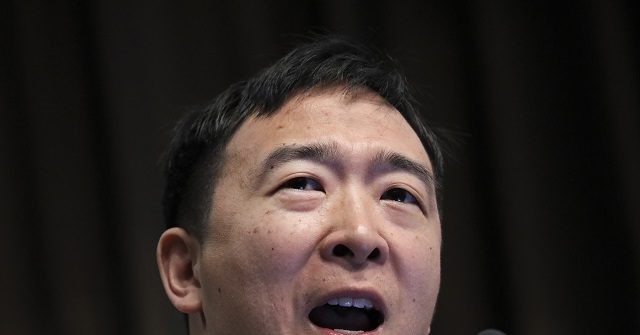 Technology entrepreneur and 2020 Democrat presidential candidate Andrew Yang on Wednesday came out in favor of lowing the federal voting age to 16 years old.

“Lower the Voting Age to 16. Getting young people voting early makes them voters for life,” Yang wrote on Twitter. “Our politics will affect young people for decades to come. They should have a say in their own future.”

New policy #7 – Lower the Voting Age to 16. Getting young people voting early makes them voters for life. Our politics will affect young people for decades to come. They should have a say in their own future. https://t.co/RbyqIu2qqY

The presidential candidate argued in a policy brief published to his campaign website site that lowing the voting age would boost electoral participation, provide representation to taxpaying teenagers, and “increase civic engagement.”

“Studies show that allowing younger people to vote has positive impacts on overall voting habits. Localities that have lowered the voting age have seen an increase in voter turnout across all age groups,” Yang’s policy brief reads. “Other studies have shown that delaying when a person first votes (because of birth dates and election cycles) decreases the likelihood that they will become a regular voter.”

Last month, House Speaker Nancy Pelosi (D-CA) expressed support for the move, telling reporters: “I think it’s really important to capture kids when they are in high school when they are interested in all of this when they are learning about government, to be able to vote.”

Pelosi remarks were part of a full-throated defense of H.R. 1 — the “For the People Act” — which Democrat lawmakers have said will increase voting rights. Republicans have decried the measure a voter fraud enabler which would give Democrats an advantage at the ballot box.

The House defeated an amendment to the bill by progressive freshman Rep. Ayanna Pressley (D-MA) which would have lowered the voting age to 16 in federal elections. It was voted down 305-126.

Yang is the only Democratic presidential candidate to endorse lowing the voting age. The 44-year-old entrepreneur has never held public office, but his campaign has caught national attention thanks primarily to his proposal of universal basic income (UBI) — distributing $1,000 every month to every adult U.S. citizen. He later announced strong opposition to infant circumcision.

Yang’s campaign announced Tuesday that it raised $1.7 million in the past two months from 80,000 donors and has qualified to appear on the debate stage.