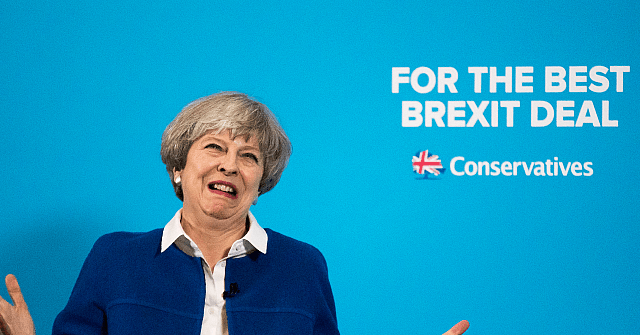 By George, I think she’s got it!

There were those who thought that Theresa May never had it in her: that she was just too charmlessly dull, too grindingly, maddeningly tediously vanilla, too robotically ordinary to clinch the title.

And the competition was so stiff too:

From Lord North, the prime minister who lost the American colonies, to Anthony Eden, the fellow responsible for our abject humiliation at Suez; from Tony Blair, the simpering perma-tanned spiv who took us into the Iraq War on a false prospectus, put thought crime on the statute books, and transformed Britain into nirvana for lefty human rights lawyers and SJW cry bullies, to Gordon Brown, the curmudgeonly loser at the helm during the last crash; not forgetting circus clown John Major and dodgy Harold Wilson and Grocer Heath, the creepy chipster who dragged us into the Common Market on yet another false prospectus; then there’s Atlee the hideously overrated Socialist who gave us our Stalinist healthcare system and Chamberlain, who thought he’d solved Hitler by waving that piece of paper… On and on the list of shame goes.

But there’s no doubt who’s at the top. Not any more. Theresa May is now beyond all question the worst prime minister in history.

How did she do it?

Well it was a stroke of genius, really. She’d just reached the stage in her political career when there was only one sane and proper thing she could have done to justify her gravely mistaken decision to have a go at being prime minister of the greatest country on earth: deliver Brexit.

And it would have been so easy, too. All she had to do was admit that her government had reached such an impasse on Brexit that it was impossible for her to proceed any further with her proposed Withdrawal Agreement; and that therefore she had no option but to accede to the electorate’s clearly and democratically expressed wishes for a so-called No Deal Brexit. Then, having said that, she could have tendered her resignation.

If she had wanted to be remembered favourably by history, this would have been a genius move. At a stroke it would have silenced all those critics who have written her off as the thick, stubborn, grotesquely anti-democratic, wilful anti-Brexit saboteur who presided over the destruction of the Conservative Party and the wrecking of the constitution. In one bound, she would have become the nation’s almost-heroine: the woman who finally did the right thing once all the possibilities had been exhausted.

Yes, Theresa May really did come that close to nearly being mentioned in the same breath as Margaret Thatcher. Just an “OK then. No Deal Brexit it is” would have been all it took to elevate her to the status of, well, not quite national treasure but definitely to “well she really wasn’t that bad, was she, all things considered — especially the last bit…”

But she blew it, didn’t she? That’s because all along she had her glowing red cyborg eyes on the greater prize.

“You think I can’t get any worse?” she asked the nation. “Hold my Prosecco!”

And that’s when she did it. Here was her masterstroke. She became the Conservative prime minister who decided that the solution to the constitutional crisis enveloping Britain was this: to ignore the result of the biggest vote in history, trample over her party grassroots, make the Conservatives pretty much unelectable for a generation — and let the decision be taken instead by the Opposition leader Jeremy Corbyn.

Yes, by Red Jeremy Corbyn, the terrorist-supporting, anti-capitalist, antisemitic, anti-free-speech, economically illiterate Socialist who has decided — or rather his puppet-masters have — that Britain can best honour the referendum result by staying in the Customs Union. (The Customs Union being the part of EU membership everyone who understands the EU agrees is the most damaging and restrictive because it stops Britain making free trade deals with other countries and means that for all eternity Britain, the world’s fifth largest economy, will have its international trading rules decided by its traditional enemies the French and the Germans.)

If this is the outcome then a heap of trouble lies ahead, for the people who voted Brexit — and they are, remember, the majority; also, this is how democracy is supposed to work, and everyone is aware of this — are not going to take this betrayal lying down.

I’m a lifelong Tory voter but you have betrayed the nation tonight and it’s time for you to GO!

Your treachery will push the Conservatives out of government for a generation if you don’t scurry out of No 10 imminently.

Your legacy is BETRAYAL of the referendum majority.

A waste of fresh air. That’s the end of the Conservative Party.

“It’s not democratically sustainable,” he says. And he’s right.

But maybe the best comment on Theresa May’s crazy decision effectively to hand over the reins of power to the Socialist Opposition leader Corbyn is this terrifying mash up image:

A previous version of this article blamed the Suez Crisis on Alec Douglas Home, rather than Prime Minister Anthony Eden. Home was Secretary of State for Commonwealth Relations at the time and, while his role in the affair is recorded, he was not Prime Minister yet and the article has been altered to reflect this fact.