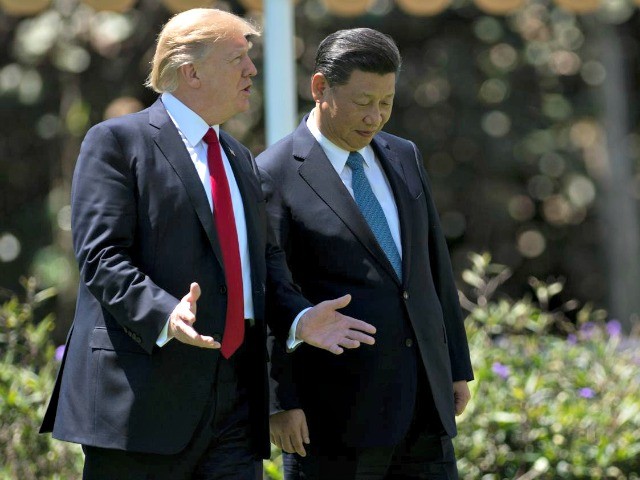 President Donald Trump spoke at the National Republican Congressional Committee (NRCC) spring dinner in Washington on Tuesday, saying he referred to Chinese President Xi Jinping as the “king” of China during their 2017 meeting in Beijing and that Xi considered it a compliment.

“He said, ‘But I am not a king. I am president,’” Trump recalled of Xi’s response.

“He said, ‘Huh.’ He liked that. I get along with him great,” Trump concluded.

CNN noted that Trump’s visit to Beijing in 2017 occurred several months before Xi actually became president for life with the official removal of limits on his term of office, although the handwriting was clearly on the wall at that point.

Trump, as he often does, talked about the Chinese as fierce competitors who took advantage of the gullible American political class to arrange lopsided trade deals.

“They would have caught us within a short period of time… within two years, by the end of my term, if you had a normal president,” he predicted.

“They’ve taken advantage of our country and you know what, I respect them for it. I say it, we should have been doing that to them,” he said at the NRCC dinner.

China has unquestionably fared much worse than the United States during the Trump trade war, defying the predictions of most analysts. Monday brought some of the best economic news for China in some time, with a strong manufacturing report, matched by a strong report for American manufacturers as well.

The good news was portrayed as a great relief to investors worried about the U.S.-China feud causing a global recession, although it could also be taken as evidence their doomsday predictions were inaccurate. The doomsayers are currently suggesting the strong manufacturing reports from both America and China were driven by fragile hopes that a trade agreement will be reached within the next three months and gloom will resume if that does not happen.

The current state of professional pessimism for the United States is a Deloitte study on Wednesday predicting a “deceleration of economic activity by the end of 2020,” although few business executives interviewed for the study believe a recession is likely.

The International Monetary Fund still believes the global economy is “delicate” and “unsettled, in part because China is keeping its economy afloat with stimulus spending that cannot continue indefinitely. The Chinese economy clearly fluctuates much more than the U.S. based on good or bad news about progress in trade talks.

To date, Trump’s vision for how the trade war would play out has been much more accurate than his critics’, and by all accounts, Chinese negotiators are moving significantly closer to the U.S. position in negotiations. The big problem for Trump at this point is that he was correct in stating that Xi Jinping is a “king” and “president for life,” while Donald Trump is not.

The clock is ticking for the Trump administration because the Chinese are not far from thinking they might be able to run out the clock until the 2020 U.S. election, bringing the game into a tense overtime period where every bit of bad economic news in the United States counts double or triple against the incumbent president.

It will be interesting to see if the recent spurt of good economic news inspires Chinese negotiators to dig in their heels or makes them more keenly aware than ever that their ambitious agenda for the coming decades will be ruined if the trade war continues.