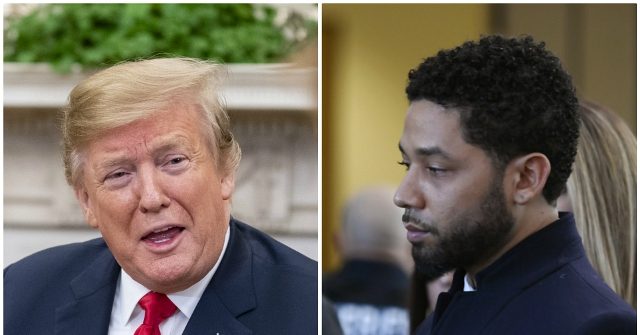 President Donald Trump mocked Empire’s Jussie Smollett as “the actor that nobody ever heard of” in a Tuesday evening speech before the National Republican Congressional Committee.

During his remarks, the president launched into a riff about Smollett for alleging he was the target of a racist and anti-gay attack by two masked men, who the actor claimed shouted “This is MAGA Country!” before fleeing.

Trump tries out the words “MAGA Country,” which reminds him of Jussie Smollett: “How about the guy from Chicago? The actor nobody ever heard of. I said, ‘who the hell is that?'” pic.twitter.com/CQcyZstZaJ

“How about the guy from Chicago? The actor that nobody ever heard of,” said Trump. “He said he got taken out by ‘MAGA country.’ I said, ‘What the Hell was that?’ I guess that’s a hate crime, right?”
Earlier this month, the Cook County State’s Attorney’s Office dropped all 16 charges against the Empire star, who the Chicago police Department charge staged a hate crime against himself on January 29th to boost his career. He is accused of filing a false police report about the ordeal.

“And it’s getting to be that time. Very important–MAGA country–you heard the other day? How about in Chicago?” the president asked his supporters. “He said, he said, he was attacked by ‘MAGA country.’ Ever hear that one? Maybe the only time I’ve ever agreed with the mayor of Chicago right there. That’s a terrible situation. That’s an embarrassment not only to Chicago, that is an embarrassment to our country, what took place there. Remember that.”

On Monday, the Fraternal Order of Police in Chicago protested outside the office of top prosecutor Kim Foxx, demanding the George Soros-funded official resign.

Chicago officials warned Smollett that he could be prosecuted for lying if he fails to repay the roughly $130,000 cost of the police’s investigation into his alleged hate hoax in the next seven days.