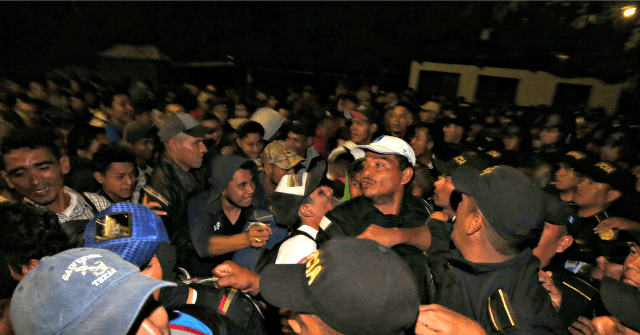 President Donald Trump said Democrats may vote to curb Central American migration into the United States — but did not show evidence that Democrats want to reform the laws that are encouraging the migration.

The United States has “the worst, dumbest immigration system in the world,” Trump said April 2, amid agency predictions that one million Central Americans will use Democrat-defended border loopholes as they join the migration into Americans’ workplaces, schools, housing market, and neighborhoods by October. He continued:

So we’ll see what happens.  I think the Democrats — today, I spoke to a couple of them and they — all of a sudden, they’re changing because they’re seeing it really is a crisis.  It is a national emergency on the border.  And let’s see if they can do it.

On Tucker Carlson’s April 2 Fox TV show, homeland security Secretary Kirstjen Nielsen declared, “I remain optimistic in the sense that I refuse to believe that the United States Congress will not act. It’s not a partisan issue.”

But Nielsen also said she does not think the Democrats want to help, adding:

I mean, look, at this point, I’ll be blunt. I think they’re blinded by politics. Unfortunately, they are blinded for what they see as a request from this administration, instead of looking at the requests and the way in which it is directly affecting Americans.

So I don’t believe that they don’t see [the drug smuggling], or they don’t understand it. They are just willfully choosing to ignore it. But the more Americans who suffer, they are going to have to look at this. I hope they do it sooner than later.

There is little chance that Democrats are reversing their deep-rooted opposition to curbs on migration, said Rosemary Jenks, policy director at the Center for Immigraiton Studies. “I have serious doubts, but hope springs eternal,” she said.

In the meantime, Trump should use his powers and pressure Nielsen to take unilateral action, even if the action angers Democrats, she said. “Congress needs to act, but it is not the case that the only answer is for Congress to act,” she said.

For example, many so-called “Unaccompanied Alien Children” are being smuggled up the border because Trump’s agencies will pass them to their illegal immigrant parents living throughout the United States, under policies set by former President Barack Obama. Those youths and children should be sent home, said Jenks, because the 2008 law only protects trafficked victims, such as forced prostitutes, not youths and children who have parents in the United States, or who are willingly smuggled up to the border.

Nielsen told Carlson that judges are not paying close enough attention to the migration, saying, “We have a lot of, in my opinion, court decisions that do not understand the full situation, the operational realities that we face every day.”

Top Democrats continue to describe the inflow of economic migrants from Central American as a “humanitarian crisis,” and continue to urge DHS officials to provide more aid, welfare, and support to the migrants as they head up to U.S. cities to accept jobs at wages far below the wages sought by Americans.

“Democrats reject any effort to let the Administration deport little children, and we reject all anti-immigrant and anti-family attacks from this President,” House SpeakerNancy Pelosi said March 29. Her statement said:

The Administration’s failed policies have created senseless heartbreak and horror at the border, which must be addressed with effective, humane solutions that protect our borders and honor our values.  We cannot support the implementation of policies that we know will hurt traumatized children, rip apart vulnerable families, dishonor our values – and do absolutely nothing to solve the situation at the border.  We also call on the Administration to immediately cease sabotaging Congress’s efforts to address the root causes of the situation.  Threatening to withhold humanitarian assistance to Central America is not a solution and makes matters worse.

“I don’t believe [the administration’s] narrative, I don’t believe the B.S. that women and children who are fleeing dangerous circumstances present a national security threat to this country,” he said April 3.

California Democratic Rep. Lucille Roybal-Allard wants Congress to increase aid to help migrants get into the United States. His district is reportedly the most Latino district in the nation, and likely includes many illegals. In a March 29 statement, she said:

I ask you to imagine having no choice but to flee your home country – leaving behind everyone and everything you know – because it’s your only chance to stay alive, or the only way to protect your children.  Imagine enduring danger and abuse on the journey to our border, because you literally have no other choice if you want to survive.

Then, imagine finally getting to America’s border, only to be caged behind chain-linked fencing under a bridge.  Imagine the hopelessness and helplessness that these migrant families must feel, as the cries of caged children and the screams of captive babies echo through the holding pen.

This administration’s treatment of migrants is totally beneath all standards of American decency.  I will use every means at my disposal to make sure migrants in U.S. custody are kept safe and treated properly.  That includes preservation of their legal right to seek asylum in the U.S.  And I emphatically oppose Secretary Nielsen’s call to expedite the deportation of innocent children for whom America is their best hope for a better future.  Our laws should protect children, not threaten their safety.

“Congress recently added extra humanitarian resources to DHS in its recently enacted funding bill for fiscal year 2019, and it looks like we will need further funding to address this humanitarian crisis.  I stand ready to quickly review and respond to any emergency supplemental appropriations request.  That request should include resources to help our non-profit partners provide migrants with shelter and support.

The declared hope of aid from House Democrats does help Nielsen and other top officials to avoid pushing policies that might anger business groups. For example, Nielsen rebuffed a suggestion from Carlson that the White House should require employers to use the E-Verify system to bar migrants from getting jobs which they need to pay their smuggling debts. She said:

There is just a debate with Congress as to whether the Executive Branch has the authority to do that. We can expand the program, but right now, it is only authorized in a voluntary way, not a mandatory way. So we can do it, but as you know, what happens when we do is we get enjoined by the Courts. So it is one of many issues we are looking to work with Congress on and we will continue to drive that.