Exclusive: George Papadopoulos Tells Why He Pleaded Guilty, and Why He Regrets It 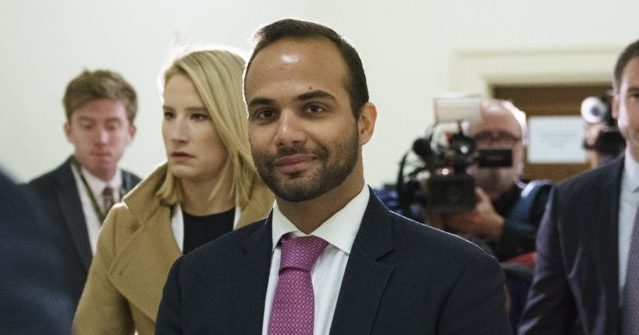 Former Trump campaign adviser George Papadopoulos discussed in a recent exclusive interview with Breitbart News why he pleaded guilty to one count of lying to the FBI, and why he regrets it.

“I was 29, I had limited funds, obviously I was just starting my career in many ways,” he said. “I have the FBI at my house a couple months ago, they’re talking in circles, they’re talking about a lot of issues that I don’t have anything to do with, they’re trying to confuse me, I’m kind of paranoid, and then I’m arrested violently in an airport.”

I’m thrown into a filthy cell, two inmates, I don’t know why I’m being arrested, I’m looking in front of a judge the next day, they’re telling me I’m looking at 25 years in prison, and I have to hire lawyers. I had already hired lawyers the preceding five months, so my funds are limited, I’m under seal, so no one knows I’ve been arrested, I can’t have a GoFundMe account to gain more money or for people to understand what happened to me — I have a family who’s terrified, I’m stuck in the city in Chicago, right? No business, and I’m looking at lawyers who don’t believe my story.

He said if he could do it all over again, he “would have never plead guilty.”

“If I could do it all over again with the information I know now, especially about my case and my situation and especially about what my involvement really was, and wasn’t, and who the characters really were, and weren’t, I would have never pled guilty,” he said.

He said he got new lawyers and considered withdrawing his plea deal with Special Counsel Robert Mueller, but his lawyers said it was too hard to get him out of the plea deal at that point.

Last week, Mueller concluded his investigation, which did not establish there was collusion, conspiracy, or coordination between Russia and the Trump campaign.

Papadopoulos published his new book, Deep State Target, several days later on what it was like to be investigated for Russian collusion.

He said he lives by a motto of “Don’t get mad, get even,” and his way of getting even is to get his story out there.

“It’s why I wrote my book. I’m very happily married, I have a wonderful wife, who’s just my rock, I’ve dedicated my book to her. And life is good now. I live in California, I have a great thing I’m working on, a docu-series about my life with my wife — she’s an actress so there are blessings that came out of this situation, but of course it was very difficult getting to where we are now,” he said. Chris Cuomo on ‘Fredo’ Meltdown: ‘I Should Be Better’ than Hecklers