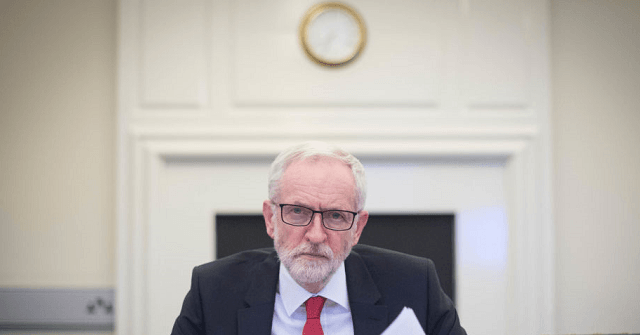 Theresa May’s ever more precarious government has suffered another resignation, this time from a junior minister and government whip who said Wednesday that the prime minister was failing in both her main duties — to deliver Brexit, and prevent a left-wing Corbyn government takeover.

Nigel Adams MP, who was a junior minister in the Wales Office and a government whip, handed in his resignation Wednesday morning. The move against the prime minister which followed a marathon seven hours of senior Cabinet meetings on Tuesday intended to break the “logjam” over Brexit came with a harsh criticism of May handing power to hard-left Labour leader Jeremy Corbyn, who he called a “calamity”.

May Condemned for ‘Subcontracting’ Brexit to ‘Known Marxist’ Corbyn https://t.co/VJQa4wQvlZ

Yet, instead of moving to deliver Brexit as voted for by the British people, in the language of Adams’ Parliamentary colleagues, the prime minister is now “subcontracting” the business of Brexit to the “known Marxist” leader of the Opposition.

Leaving the door open to an even softer Brexit than the prime minister had even arranged for, May said if she could not find agreement with Corbyn, she would leave it open to the Remain-dominated Parliament to set the way forward, and that she would follow.

Writing to the prime minister, Adams said of the latest Brexit developments and their impact on his willingness to continue serving: “I believe we have two great challenges. We must deliver the Brexit the people voted for. And we must prevent the calamity of a Corbyn government.

“Sadly, I fear that we are now at risk of simultaneously failing in both.”

Following yesterday’s cabinet, this morning I’ve been to Downing Street & resigned my position as UK Govt Minister for Wales & Govt Whip. I’m grateful to the PM for the opportunity to serve as a Minister since 2017 & will continue to serve my constituents from the backbenches. pic.twitter.com/W15xS4cOBP

In British Parliamentary parlance, whips are charged with the important task of enforcing discipline among back-bench Members of Parliament, to ensure they vote with the will of the government. If even the whips are unable to support the government’s position it would, therefore, point to seriously deteriorating morale levels within the governing Conservative Party.

Adams is not the first whip May has lost over Brexit. Brexiteer Gareth Johnson quit in January so he could oppose Theresa May’s so-called “worst deal in history” EU Withdrawal Agreement in Parliament votes. He said at the time: “This agreement prevents us from taking back control and instead could leave us perpetually constrained by the European Union… I have decided the time has come to place my loyalty to my country above my loyalty to the government.”

Labour leader Jeremy Corbyn himself has emerged as a deeply divisive figure in British politics, not just for his hard-left views but also for the surge in antisemitism across his party that seems to have coincided with his leadership. Breitbart’s London and Jerusalem offices have followed these developments, including the several ex-Labour MPs who have been pushed to leaving the party altogether over the scourge. Pollak: Has the Left Toned Down Its Rhetoric Since Alexandria? | Breitbart