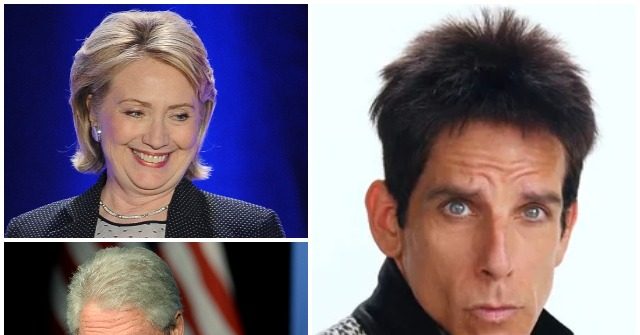 “Hillary Clinton and I are hitting the road with some friends and we hope to see you!” Bill Clinton said Wednesday.

.@HillaryClinton and I are hitting the road with some friends and we hope to see you! Click here for more info: https://t.co/5z8pbzxnNm pic.twitter.com/RHuR1WWOVT

The Clintons will speak with actors Ben Stiller and Tony Goldwyn and former NFL player Nnamdi Asomugha in different cities.

Bill and Hillary hit the road last year for a tour that failed to generate enough public interest to even fill the seats in the venues they chose.

As Breitbart News reported in November, their tour had trouble filling seats from the beginning. Hillary Clinton also had a trademark coughing fit during the first event.

In December, ticket prices fell so much that some locations were selling them for $7.

Since losing the election to President Donald Trump in 2016, Hillary Clinton has frequently attacked him, accusing him of being a racist and being beholden to Russia.

“He does have a strong streak of racism that goes back to his early years,” Clinton said last year.

“I include his anti-immigrant tirades because he characterizes immigrants in very racially derogatory ways, but he was Islamophobic, he was anti-women, he really had the whole package of bigotry that he was putting on offer to those who were intrigued and attracted to him.”