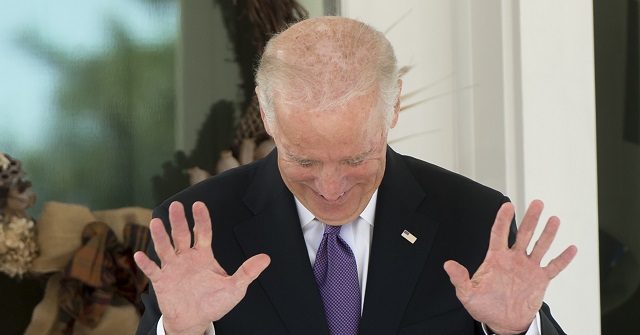 Former Vice President and potential 2020 Democrat presidential contender Joe Biden on Wednesday responded to fresh allegations of inappropriate touching against him from several women, pledging to be “more mindful about respecting personal space.”

“Social norms are changing,” Biden wrote in a social media post with a two-minute long video. “I understand that, and I’ve heard what these women are saying.”

“Politics to me has always been about making connections, but I will be more mindful about respecting personal space in the future,” he continued. “That’s my responsibility and I will meet it.”

Social norms are changing. I understand that, and I’ve heard what these women are saying. Politics to me has always been about making connections, but I will be more mindful about respecting personal space in the future. That’s my responsibility and I will meet it. pic.twitter.com/Ya2mf5ODts

Four women in recent days have alleged the former vice president interacted in ways that made them feel uncomfortable.

Last week, former Democrat Nevada Assemblywoman Lucy Flores alleged Biden kissed the back of her neck and smelled her hair during a campaign event in 2014. Amy Lappos, then a congressional aide to Rep. Jim Himes (D-CT), said Biden rubbed his nose of hers at a 2009 political fundraiser in Greenwich, CT.

Biden was accused by two more women of unwanted touching Tuesday evening. One of the accusers, Caitlyn Caruso told the New York Times that the 76-year-old rested his hand on her thigh at an event on sexual assault at the University of Nevada and hugged her “just a little bit too long.”

The video was Biden’s first direct comment on what has tripped up his preparations to enter the 2020 Democratic presidential campaign. He did not directly apologize but seemed to be seeking to ease some people’s discomfort, which has raised questions about whether he could wage an effective campaign.

Biden, a former longtime U.S. senator from Delaware, first said in a statement that he did not recall the episode that Flores initially described in the magazine piece and then in subsequent weekend interviews.

Aides to Biden struck a more aggressive tone on Monday as the former vice president faced scrutiny over his past behavior toward women.

In a statement, Biden spokesman Bill Russo blasted “right-wing trolls” from “the dark recesses of the internet” for conflating images of Biden embracing acquaintances, colleagues and friends in his official capacity during swearing-in ceremonies with uninvited touching.

“The Vice President has issued a statement affirming that in all the many years in public life that he has shaken a hand, given or received a hug, or laid his hand on a shoulder to express concern, support; or reassurance, he never intended to cause discomfort,” Russo said. “He has said that he believes that women who have experience any such discomfort, regardless of intention, should speak and be heard, and that he will be among those who listen.”

“But the important conversation about these issues are not advanced, nor are any criticisms of Vice President Biden validated, by the continued misrepresentation of the Carter and Coons moments, or a failure to be vigilant about a cottage industry of lies,” he added.

Biden’s potential Democratic rivals haven’t rushed to back him up. Over the weekend, presidential candidates Elizabeth Warren and Kirsten Gillibrand came closest to calling out the former vice president. Warren said Biden “needs to give an answer” about what occurred. Gillibrand said, “If Vice President Biden becomes a candidate, this is a topic he’ll have to engage on further.”

Ultraviolet, a women’s advocacy group, tweeted: “Joe Biden cannot paint himself as a champion of women and then refuse to listen and learn from a woman who says his actions demeaned her. Good intentions don’t matter if the actions are inappropriate. Do better, Joe. And thank you @LucyFlores for coming forward.”

President Donald Trump taunted Biden over the allegations at a dinner Tuesday for the National Republican Congressional Committee, the fundraising arm for GOP House candidates.

Musing on potential 2020 Democratic opponents, the president said the only one who’s not a socialist is “being taken care of pretty well by the socialists.”

He added: “I was going to call him and say, ‘Welcome to the world, Joe. You having a good time, Joe?’” Americans for Limited Government Wants Docs on Bribery Under Holder