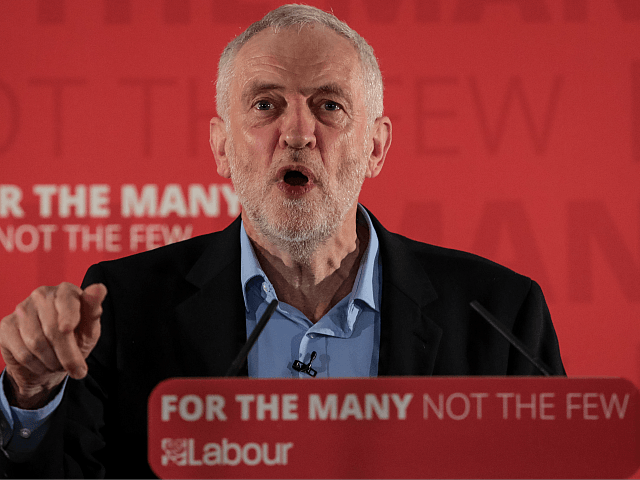 Brexiteers have condemned Prime Minister Theresa May for abdicating power of  the government to a progressive-socialist shadow cabinet and Brussels.

After a marathon seven-hour Cabinet meeting, Prime Minister May told the country Tuesday night that she would seek another “short” extension of Article 50, delaying Brexit day further, which she said would end once a deal is passed in the House of Commons.

While this move may have been expected, given that the prime minister’s Withdrawal Agreement was voted down for a third time and two rounds of non-binding votes in the Commons resulted in no support for an alternative, May shocked the country by handing power over to the far-left leader of the Labour Party Jeremy Corbyn.

In the brief statement, the prime minister said she will to sit down with Corbyn “to try to agree a plan” on the “future relationship with the EU” which must also include the EU-approved Withdrawal Agreement. But she also added that if the two party leaders could not agree to a “single unified approach,” then “we would instead agree to a number of options for the future relationship which we could put to the House in a series of votes to determine which course to pursue” — handing the whole of the future of Brexit, in effect, over to the Opposition.

The traditional-conservative Democratic Unionist Party (DUP) of Northern Ireland, whose ten MPs prop up May’s Conservative minority government, accused the prime minister of “sub-contracting out the future of Brexit to Jeremy Corbyn” and condemned her “lamentable handling of the negotiations with the EU.”

Former foreign secretary and Vote Leave campaigner Boris Johnson wrote, “It now seems all too likely that British trade policy and key law making powers will be handed over to Brussels — with no say for the UK” and that the country would be forced to “agree to exit terms that in no way resemble what the people were promised when they voted to leave.”

“The PM and cabinet have concluded that any deal is better than no deal, and this is truly a very bad deal indeed — one that leaves us being run by the EU. I can under no circumstances vote for a deal involving a customs union as I believe that does not deliver on the referendum,” Mr Johnson added.

Speaking later that evening to the BBC, the Brexiteer warned that “if Corbyn gets his way, we remain in the Customs Union so that we can’t control our trade policy, huge areas of law making we can’t control, and Brexit is becoming soft to the point of disintegration.”

While chairman of the European Research Group (ERG) Jacob Rees-Mogg said, “I think getting the support of a known Marxist is not likely to instil confidence in Conservatives.

“This approach to Government is an unsuccessful one and it also lacks democratic legitimacy.

“People did not vote for a Corbyn-May coalition Government – they voted for a Conservative Government, which became a confidence and supply with the DUP.

“This is a deeply unsatisfactory approach – it’s not in the interests of the country, it fails to deliver on the referendum result and history doesn’t bode well for it.”

The prime minister is expected to meet with Corbyn later today. Mr Corbyn has said he wants a custom unions with the EU and access to markets — a soft Brexit that would stop the UK from signing her own trade deals, including with the U.S. — as well as protection of environmental standards and workers’ rights. While pro-Remain Labour MPs want a second referendum on the deal agreed between the EU and Parliament before the UK can leave the EU.

May will also be meeting with Scotland’s First Minister Nicola Sturgeon, whose far-left Scottish Nationalist Party (SNP) backs EU Single Market alignment which includes uncontrolled migration from the bloc’s half a billion population.