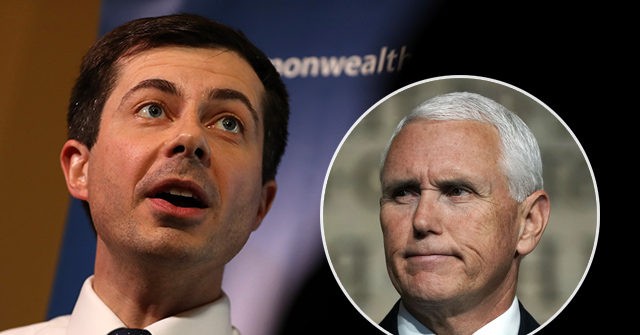 South Bend Mayor and Democratic 2020 presidential candidate Pete Buttigieg suggested Tuesday that Vice President Mike Pence is not as sincere in his Christian faith as he claims to be, judging based on his political alliance with President Donald Trump.

“The section in my book about Mike Pence begins with that quote from Lincoln where he says, “Both sides in great contests invoke God, think and hope that God’s on their side. Both may be, and one must be, wrong,” Buttigieg told Father Edward Beck in a wide-ranging interview on faith and public service for CNN. “The idea that God wants somebody like Mike Pence to be the cheerleader for a President largely known for his association with hush money to adult film actresses seems to me to give God very little credit.”

Michael D’Antonio, co-author of The Shadow President: The Truth About Mike Pence, told CNN in August 2018 that Pence believes him becoming vice president was divine intervention. “Absolutely everything that Mike Pence does is oriented towards him becoming President… by the time he left high school, he had decided he was going to be President of the United States.”

“And as he rose through life, becoming a member of Congress and then Governor of Indiana, he actually sort of heard in his being God’s direction,” D’Antonio told New Day co-host John Berman. The author went on to claim how Pence “thought that God was calling him to now be Vice President and function as a President-in-waiting.”

In his discussion with Beck, Buttigieg took aim at Indiana’s Religious Freedom Restoration Act, legislation that Pence, then governor of the state, signed into law in 2015. The law allows both individuals and business to assert as a defense in legal proceedings that their religion has been burdened. The small town mayor called it a “license to harm others in the name of religion.”

“It was to me a trashing not just of our sense of freedom and our sense of rights, but also, in some way, a trashing of religion,” he said. “Like is this really the biggest thing we should be doing to accommodate religion right now? Making it easier to harm people in its name?”

In another portion of the pair’s discussion, Buttigieg spoke about why he believes same-sex marriage is a contentious issue in religious circles.

“It saddens me because when I think about the blessings of marriage, first of all it’s one of the most conservative things about my life, very conventional,” the 37-year-old said. “It is morally one of the best things in my life. Being married to Chasten makes me a better person. I would even say it moves me closer to God.”

“And so the idea that this of all things is what people are attacking each other over and excluding each other over, when God is love, we are taught,” he went on. “Of all the things to beat people up over on theological grounds, it just seems to me that loving shouldn’t be one of them. So it’s a painful thing to watch.”

The interview comes after Buttigieg announced his campaign had raised more than $7 million in the first quarter.