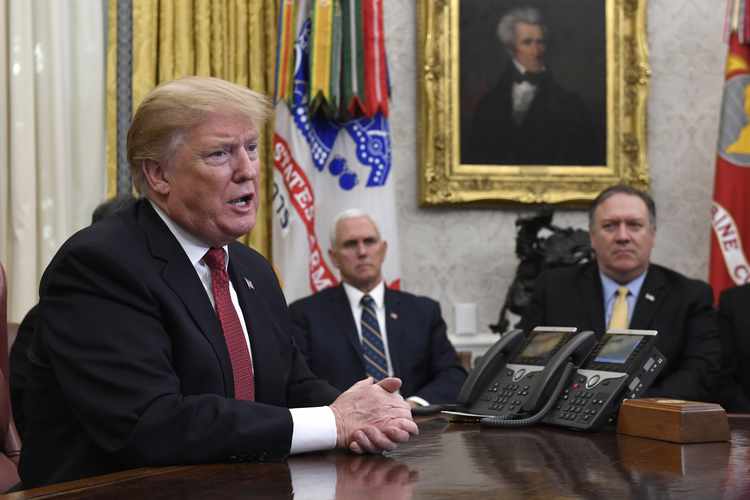 Two influential Democratic senators for the first time are urging President Trump to use sanctions relief for countries that want to do business with Iran as leverage to help secure the release of Americans unjustly imprisoned in the Islamic republic.

Sens. Tim Kaine and Chris Coons, both senior Democrats on the Foreign Relations Committee, sent a letter to Trump Monday imploring him to use “all leverage possible” in trying to free Americans imprisoned in Iran and elsewhere.

Kaine and Coons called on the administration to form a multinational taskforce to combine efforts with at least 12 other nations whose citizens are also unlawfully detained in Iran.

The senators also said the administration should require countries seeking conditional waivers from U.S. economic sanctions on Iran, including Iraq, India and China, to lean on Iran to free Americans and other Western prisoners.

“The lives of these Americans are at risk,” Kaine and Coons wrote. “The United States needs to send a strong signal to Iran that it must stop taking Americans hostage. We urge you to use all leverage possible to intervene on their behalf.”

The senators wrote the letter a week after the administration issued a new round of sanctions against 16 individuals and 15 entities in Iran they determined are involved in trying to reconstitute past nuclear-weapons work.

Earlier this month, several members of Congress who support the Trump’s “maximum pressure” campaign against Iran were angered over an administration decision to grant Iraq a major reprieve on Iran sanctions by allowing Baghdad to continue buying electricity from Tehran through a 90-day waiver.

Several Capitol Hill lawmakers and advocates for the Americans imprisoned in Iran want the administration to condition any and all Iran sanctions waivers, especially those involving oil sales, on the prisoners’ release.

The letter from Kaine and Coons is the first tangible sign of a bipartisan push on Capitol Hill for more concrete steps to try to secure the Americans’ release.

There are at least six Americans imprisoned or missing in Iran, including Michael White, a veteran of the U.S. Navy who was in Iran visiting his girlfriend on a valid tourist visa. White went missing in July.

At least three hostages were taken during the Obama administration while Washington and Tehran, along with several U.S. allies, finalized the nuclear deal in late 2015 and early 2016. In January of 2016, four other U.S. hostages were released from Iran at the same time as the Obama administration made a controversial $400 million cash payment to the regime, leading some Republicans to deem the payment ransom and argue that it encouraged more hostage-taking.

The three Americans who were imprisoned in late 2015 were left behind. President Trump pulled out of the nuclear deal last May, severing nearly all diplomatic contact between Washington and Tehran.

Before the Kaine-Coons letter, Republican hardliners on Iran such as Sen. Ted Cruz were far more vocal in support of measures to punish Tehran for imprisoning Americans. Last year, the House passed a bill, the Iran Human Rights and Hostage-Taking Accountability Act, that would impose sanctions on Iranian officials responsible for the detention of Americans and other foreign nationals. Cruz sponsored similar legislation that would revoke U.S. visas to family members of Iranian officials who detain Americans.

The Kaine-Coons letter was sent just days before a major Trump administration event aimed at responding to concerns raised by families of Americans imprisoned in Iran and elsewhere about the lack of progress on their loved ones’ cases. The families are frustrated by the impasse as they’ve watched the president hail the safe return of several Americans held in North Korea, Turkey and Yemen.

On Tuesday Vice President Mike Pence hosted an emotional gathering at the White House with families of Americans detained in Venezuela, and Secretary of State Mike Pompeo sat down with relatives of U.S. citizens and permanent legal residents held in Iran, Venezuela and other countries to try to reassure them the administration is doing all it can to free their loves ones.

The Pompeo meeting came three weeks after relatives of four Americans held in Iran pleaded for a sit-down meeting with President Trump during a House hearing marking the 12th anniversary of the disappearance of former FBI agent Robert Levinson. Levinson was last seen on Iran’s Kish Island in 2007 and is the longest-held hostage in American history.

After privately speaking with the families, Pompeo publicly addressed a larger gathering, which included congressmen, senators, ambassadors and other officials gathered at the State Department.

Pompeo thanked the families for attending and spoke about their deeply personal struggles to win their loved ones’ release. He said he regretted that the gathering had taken so long to organize and made a “personal commitment” to work every day to “deliver every wrongfully detained American home.”

He also underscored how committed President Trump and his administration are to the mission of securing the release of Americans wrongfully imprisoned abroad. Pompeo said he has witnessed Trump’s personal interest in hostage cases during his time as director of the CIA, and now as secretary of state.

“The president asks every week for an update,” Pompeo told the families in public remarks. “He wants to know the status; he wants to know what we’re doing and why we haven’t been more successful. He is personally invested in the safe return of each and every one of them.”

Robert O’Brien, the State Department’s special presidential envoy for hostage affairs, said he and his team asked the families to come to Washington for the meeting so they could “know and feel the deep commitment we have to bringing [their loves ones] home.”

“For those of you here today who’ve lost loved ones at the hands of evil men, evil terrorist organizations, and evil regimes, we asked you here because we want to know that your loss will never be forgotten,” he said. “We want you to know that you have a community here at the State Department; we support you and we love you.”

O’Brien said he and his team along with the Hostage Recovery Fusion Cell, created during the Obama administration and headquartered at the FBI, are solely devoted to bringing “our fellow-citizens home.”

Pompeo said the mission of freeing Americans held hostage by U.S. enemies is a deeply personal one to him. He then referenced the biblical story about the Apostle Peter’s being freed by an angel the night before his likely execution at the hands of King Herod’s regime.

“Those of you who know this verse know it’s an incredible moment,” Pompeo said. “Peter was rescued the night before he was to face judgement and likely execution. But his hope and faith allowed him to walk free.”

He said he understands that rescued hostages “feel Like Peter must have felt, like they’ve received an act of God.” But he also acknowledged that there are too many Americans held abroad that have not been saved as Peter was.

“Sometimes, our efforts fail, or they don’t produce the results as quickly as they deserve,” Pompeo said. He then cited the tragic deaths of several hostages held by ISIS and other U.S. enemies, including Jim Foley, Kayla Mueller, Steven Sotloff, Peter Kassig and Otto Warmbier.

“Their families were all with us today,” he said. “I want to personally thank them for being here.”

Earlier Tuesday, Pence met with family members of six Citgo executives detained by the Maduro government in Venezuela. Authorities in Caracas arrested the executives, five of whom are American citizens, during corporate meetings in the capital in November 2017.

Threatening additional sanctions against Maduro and his associates, Pence reiterated the administration’s deep concern for the welfare and safety of all detained American citizens abroad and called on the embattled Venezuelan leader to release an estimated 280 known political prisoners.

The vice president promised the family members that “we are with you — we are going to stand with you until your loved ones are free, until Venezuela is free.”

He read the names of the detained executives and said the Maduro government is blocking any communication between them and their family members, citing 16 cancelled meetings.

Veronica Fadell Weggemaan, the daughter of a detained Citgo executive,  said the meeting with Pence is giving her family new hope for her father’s safe return, although in recent days they have grown increasingly worried about their father’s health and safety. There has been no contact for four weeks since the electrical blackouts in the country began, she said.

Carlos Anez said his father worked for Citgo for 21 years and is now imprisoned in the basement of a counterintelligence military facility “with very little air circulation now [and] with no light and absolutely no medical care.”

“We just want them home as soon as possible,” Anez said, expressing confidence in the administration’s track record in freeing other Americans imprisoned overseas. Rep. Hunter pretends to cross the Mexico border and gets called out for violating his parole