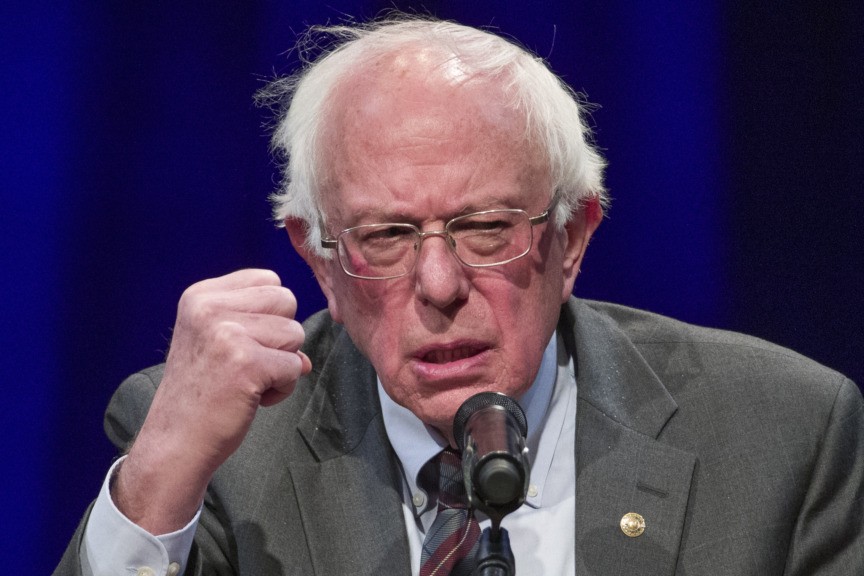 Sen. Bernie Sanders’ (I-VT) has a lot of leftwing Americans supporting his presidential campaign, but he also has fans around the world who share his socialist values.

“From South America to Europe to the Middle East, leftist leaders are celebrating his candidacy, viewing him as an iconic democratic socialist with the potential to lead a worldwide progressive movement at a time when right-wing populism is on the rise across the map,” Politico reported.

The support from socialists around the globe “burnishes the Vermont senator’s foreign policy bona fides at a time when he is trying to shake the reputation he received in 2016 as a lightweight on international affairs,” Politico claims in its report.

But the praise for his brand of socialism also could put him too far to the left to win the White House in 2020.

“There is a danger to collecting maybe not endorsements, but positive reviews from far-left politicians around the world when American voters are still not quite sure about how they feel about democratic socialism,” Jennifer Holdsworth, a former staffer for Hillary Clinton’s 2016 bid and the ex-campaign manager for Pete Buttigieg’s run for Democratic National Committee chairman, said in the Politico report.

“And this is not just a Democratic primary conversation, this is also a general election conversation,” Holdsworth said.

Politico reports that Evo Morales, the socialist president of Bolivia, is one of Sanders’ fans, as evidenced by his congratulating the candidate on Twitter.

We congratulate brother @BernieSanders, who, according to the press, moves forward the US presidential nomination. We are confident this progressive leader will have a strong support from the people of the US. Democratic revolutions are built upon democratic elections pic.twitter.com/Qrz0eK6dvh

Members of the United Kingdom’s Labour Party have asserted that Sanders and Jeremy Corbyn would have a “special relationship” if both men led their nation, according to Politico.

“Over the moon that @BernieSanders is running for President in 2020. Bernie was never just a candidate, his campaign was a movement, galvanizing millions & offering hope across the globe. I think he can beat Trump, but not only that, he can transform US society. Bernie gets it.”

Over the moon that @BernieSanders is running for President in 2020. Bernie was never just a candidate, his campaign was a movement, galvanising millions & offering hope across the globe. I think he can beat Trump, but not only that, he can transform US society. Bernie gets it: pic.twitter.com/MOKvDsq3tb

“Bernie Sanders’ last campaign was part of the inspiration for the way in which Labour approached the 2017 general election,” Burgon said. “Where we went to a very low position in the polls to being the biggest swing to the Labour Party in a general election since 1945.”

In Canada, Israel, Germany, and Spain, progressive politicians have also hailed the Vermont senator on social media and in interviews, often speaking favorably of his Medicare-for-All proposal, non-interventionist foreign policy, and advocacy for the Green New Deal. Sometimes, the excitement is borderline giddy: Stefan Liebich, a Left member of the German Bundestag, recently posted a photo of himself on social media holding a Sanders figurine, adding, “#feelthebern.”

To both Sanders and his supporters around the world, it is impossible to fight climate change without international cooperation. To that end, a group called the “Progressive International” was announced at a convention last year held by the Sanders Institute, a think tank founded by the presidential contender’s wife and son.

The network of left-wing politicians and activists hopes to fight against “the global war being waged against workers, against our environment, against democracy, against decency,” according to its website.

Niki Ashton, a Canadian member of Parliament, said Sanders “has shifted the conversations both in the U.S. and around the world.”

Politico called Sanders’ fans “progressives” who want to counter President Donald Trump and other leaders who want to make their countries and citizens a priority, including newly elected Brazilian President Jair Bolsonaro.

“The far right have internationalized,” Ross Greer, a Green member of Scottish Parliament told Politico. “They cooperate and coordinate across borders, so if we are to defeat them, we need to do the same. Bernie gets that in a way I’ve not seen from any other presidential candidate.”

“All around the world, in Europe, in Russia, in the Middle East, in Asia, Latin America, and elsewhere we are seeing movements led by demagogues who exploit people’s fears, prejudices and grievances to gain and hold onto power,” Sanders said in the speech. “We need to counter oligarchic authoritarianism with a strong global progressive movement that speaks to the needs of working people.”

“Leftist leaders across the globe look back at the dynamics of Donald Trump’s 2016 campaign and its connection to the rise of right-wing populism and nationalism, and envision Sanders playing a similarly catalytic role on the left if he emerges as the Democratic nominee,” Politico reported.

Sanders has been criticized, even among the left in this country and abroad, for not being willing to call Nicolas Maduro a dictator or to recognize Juan Guaido as the interim president of Venezuela.

“What’s clear is that Sanders’ fate will be closely watched beyond U.S. borders, where many on the left see his campaign as testing the American appetite for left-wing policies and a global progressive movement in a way that no other Democratic candidate does,” Politico speculated in its report.