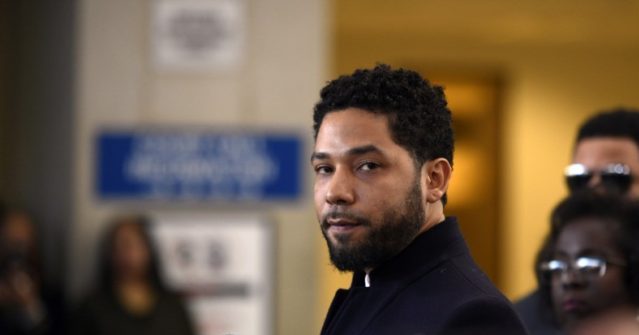 The city of Chicago will file a civil lawsuit against Empire actor Jussie Smollett for the cost of the investigation into his alleged hate hoax.

The city’s law department on Thursday evening told ABC 7 Chicago: “The Law Department is now drafting a civil complaint that will be filed in the Circuit Court of Cook County” against the Hollywood star.

JUST IN: The city of Chicago law department tells @ABC7Chicago “The Law Department is now drafting a civil complaint that will be filed in the Circuit Court of Cook County” against Jussie Smollett.

Last month, the Cook County State’s Attorney’s Office dropped all 16 charges against Smollett, who the Chicago Police Department say staged a racist and anti-gay assault on himself in a bid to help his career. He stands accused of filing a false police report about the incident. Smollett told police that two masked men hit him, doused him with an unknown chemical substance and placed a thin rope around his neck in downtown Chicago on January 29th. The actor also told officers the men screamed “This is MAGA country!” before fleeing the scene.

Lori Lightfoot, who will be sworn in as Chicago’s next mayor on May 20th, could undo legal actions taken by city officials against Smollett. Appearing Wednesday on MSNBC, Lightfoot, a former prosecutor, said the Empire actor must be held accountable for any wrongdoing.

“The State’s Attorney’s office here which made the decision unilaterally to drop the charges has to give a much more fulsome explanation,” she told anchor Craig Melvin. “We cannot create the perception that if you’re rich or famous or both that you got one set of justice — and for everybody else it’s something much harsher. That won’t do and we need to make sure that we have a criminal justice system that has integrity.”

“I believe that everybody is entitled to a presumption of innocence,” she added. “But I saw — as I’m sure you and your listeners saw — a very compelling case, with videotapes, witness statement and other information that looked like he had staged a hoax, and if that happened he’s got to be held accountable.”

Meanwhile, Empire actress Taraji P. Henson told The View Thursday that Smollett will return to the program next season despite the allegations made against him.