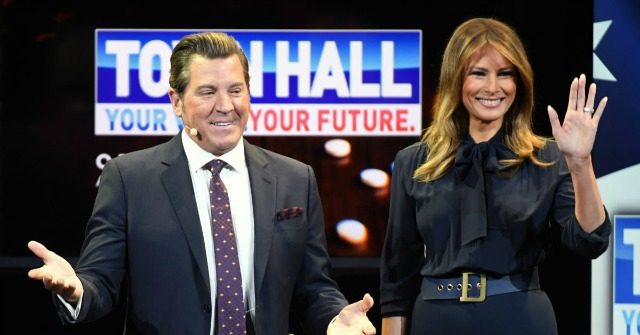 Eric Bolling, host of BlazeTV’s America and of Sinclair Broadcast Group’s America This Week, told Breitbart News that despite hating his role as “the face” of a series of town hall events examining  opioid abuse, he takes comfort in the work of “saving lives.”

Bolling recalled the moment he learned of his son’s death.

“About a year ago, I got a call from my sophomore son’s friend, his girlfriend was crying,” began Bolling. “I said, ‘Kayla, is he alive?’ I don’t know why I said that. Her only answer was, ‘No.’ I was on speakerphone. My wife was driving. She pulled over to the side of the car and literally parked the car. [We were] still in the active roadway, and I had to go grab her. She and I sat on the curb literally for probably two hours, and just didn’t say word. All I could hear was Adrienne saying, ‘No, no, no.’”

Bolling shared some of his communications with President Donald Trump and Melania Trump in the wake of his son’s passing.

“The president called me the next morning,” stated Bolling. “I flew out to Colorado to do the unthinkable, [to] identify my son. The president called us and asked, ‘What can I do?’ I said, ‘Mr. President, I’m in no state to know what to do what, right now.’ He said, ‘Alright, I’ll call you again.’”

Bolling went on, “He called me a few weeks later. It was Thanksgiving. It was just so thoughtful, and I said, ‘Listen, can I come talk to you?’ I spoke to him in the Oval Office a couple of days later. I just realized they had an opioid plan, but it was more on the enforcement side, not much on the awareness side.”

Bolling remarked, “My son, he wasn’t a user. He bought Xanax on campus to relax, which apparently goes out all the time. I didn’t know this, and it happened to be laced with Chinese fentanyl, and he never woke up. That same night, I think it was an admiral’s son, a 19-year-old son, the same exact age and night, also in Colorado, but a couple of miles away at Denver University, died of the same Xanax laced with fentanyl. It probably came from the same bad batch.”

Bolling described a series of town halls he is hosting examining opioid abuse entitled, “Your Voice, Your Future,” in partnership with Sinclair Broadcast Group.

Bolling declared, “The first lady has been phenomenal. She’s come out on a couple of those town halls and talked about the dangers of opioid abuse and addictions and what not. We’ve literally had dozens of people call, saying either, ‘I’m getting help,’ ‘I’m getting help for a friend,’ or ‘I quit completely on my own because of what I saw.’”

Bolling added, “Thanks to the first lady, thanks to Sinclair, and thanks to just an absolute tragedy I am in the midst of. I wish I wasn’t the person on the front line of that, but thanks to this we’re saving some lives. We’re coming to the end of the town halls, but it’ll always — obviously —  be a part of what I do on TV.”

“The thing about opioids [is] it’s non-partisan,” assessed Bolling. “It’s non-denominational. It’s not separated by class. Everyone’s exposed to it across the country. Almost 200 people a day die of overdoses; most of them from opioids. It’s a national health crisis. We’re just trying to be out there and help.”

Bolling stated, “Honestly, it rips my soul out of my chest every single one of these town halls I do, and I literally only do it because people are being helped. I hate it. I hate what I’m doing. I hate being the face of this thing.”

In March, Bolling was insulted by an unidentified man who mocked the death of his son.

“The other night I’m at Trump Hotel — which I am quite often — I do the shows from D.C. … [and] I’m having a late-night cocktail with a group of friends. One of them is the young man who got punched for wearing the MAGA hat on Cal Berkeley’s campus, and President Trump brought him on-stage at CPAC. Hayden Williams is his name.”

Bolling went on, “So I’m sitting with him and a couple of Cal Berkeley guys, and a couple of other friends of mine who are sitting at the table, and a guy walks by the table, on his cell phone, and as he walks by he stops, turns, and says, ‘Eric Bolling’s son killed himself because he was embarrassed of his dad,’ and keeps walking. It took me like literally a second for me to comprehend what had just been said to me.”

Bolling added, “I get up, and I follow him. He’s walking fast and he’s still on the phone, and I can’t figure out why someone would stop and not want to confront. So he keeps walking toward the door of the hotel. He quickly runs out the door of the hotel, and suddenly I had a moment of clarity and I just started taping. I put my phone on video and I started taping, and I caught up to the guy, and I had some really bad words that I was yelling at him, but I was infuriated. I was hurt. I was insulted, and I kept taping.”

On March 21, Bolling shared some video he had captured while pursuing the aforementioned unidentified man.

.@EricBolling was sitting with some friends at Trump Hotel in D.C. when a man walked by his table & said, loud enough for them to hear, Eric’s son “killed himself because he was embarrassed by his dad.”

Eric followed the hateful man outside & started filming what came next… pic.twitter.com/51FhqG6Nmh

Bolling said, “What I realized was, Hayden came out — the young man — and he’s like, ‘Eric, stop. Just leave him alone. This is what they want.’ You can hear on my tape, which I haven’t released the whole tape. I released pieces of it. I want to hold it in case this guy claims something else happened which didn’t.”

The harassment directed against him at Trump Hotel may have been a coordinated leftist operation with at least one other man, speculated Bolling.

“So I turn and I let him go, and I turn, and there’s another guy who apparently had been planted at the entrance of the hotel, and he’s got a big smile on,” recalled Bolling. “My son has just been insulted. I’ve been insulted in front of friends. My son didn’t kill himself. He died in an accidental opioid overdose. I love my son. We shared clothes. I talked to him five times a day at college. We were best friends.”

Bolling remembered, “So I turn and this guy’s smiling and he’s got a camera like two inches from my face, and I tape this whole thing and it was so disgusting. I realize that the left, whoever these people were — and I think there was a group, because I don’t think any one or two people could be that low — they reached new levels of low.”

“What you did is I think exactly what Andrew Breitbart would have wanted. Sunlight is the best disinfectant, getting them on camera and fighting back.”

Fauci on Why There Are Mask Mandates if 'Virtually Everybody' Will 'Likely' Get COVID: Some Places Want to Prevent Overwhelming Hospitals

Joe Biden Goes Off-Script with Kentucky Flood Victims: ‘The Weather May Be Beyond Our Control for Now’