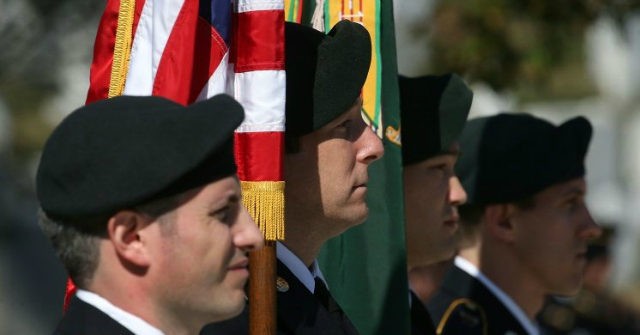 Sen. Thom Tillis (R-NC) told Breitbart News on Thursday that his office will investigate allegations that a two-star Army general has wrongly retaliated against Green Berets under his command at the John F. Kennedy Special Warfare Center and School (SWCS).

Those allegations center on Army Maj. Gen. Kurt L. Sonntag, who unleashed a string of career-ending punishments last year, after one Green Beret instructor at SWCS wrote a 6,399-word anonymous email expressing concern over the alleged lowering of standards for candidates going through the Qualification course, where Green Berets are graduated.

“That is something when I get back to my office [in North Carolina] we’ll be looking into it,” said Tillis, who is the chairman of the Senate Armed Services Personnel Subcommittee and represents North Carolina, where SWCS is located at Fort Bragg.

“There are some standards that I think are completely appropriate, but when we start lowering the standards to address anything other than capabilities and readiness, then I’m willing to take the politically unpopular position to make sure that our folks are, well, they’re safe and lethal. I’ll make sure that my staff follow up on it.”

He said he has not seen the specific allegations, so he cannot yet say if he agrees with them, but he said they are “certainly” worth looking into.

“Anytime you have somebody on the ground — we’re talking Green Berets — these are highly skilled, experienced people, and anytime, they have a vested interest in making sure that their peers are equally ready and capable, and so anytime  those folks on the ground, their opinion is very important,” he said.

Last month, Breitbart News detailed allegations in a report from more than half a dozen current and recent Green Beret instructors stating Sonntag had retaliated against them and others for speaking out privately and publicly against the lowering of standards.

After the email with their concerns leaked, Sonntag launched an investigation that included seizing computers and email records and narrowed down the suspects to instructors in one company at a training battalion at SWCS.

He went after two additional senior non-commissioned officers who were suspected of being involved. They requested a court-martial to prove their innocence after he issued both of them Article 15 punishments. He then withdrew those Article 15 punishments and punished them both with permanent General Order Memorandum of Reprimand (GOMOR) that triggered their discharge from the military entirely.

After Breitbart News’s report, at least six more current and retired Green Beret instructors have privately reached out to say they can confirm the allegations of either retaliation, lowered standards, or both. At least two have also reached out to say the allegations of lowered standards are not true. U.S. Army Special Operations Command, which oversees SWCS, has also denied that any standards have been lowered.

Sergeant First Class Micah Robertson, one of the Green Beret instructors who received a permanent GOMOR and is facing separation from the Army, said in a brief statement to Breitbart News, “Myself, the other cadre that have been wronged by General Sonntag and our fellow brothers on the teams, are relieved and encouraged by the news that Sen. Tillis and his office have taken note of this issue and have decided to start an investigation. The officers and men that have been wrongfully pursued by Gen. Sonntag are ready and willing to bear witness to every wrongdoing Gen. Sonntag and his command have done.”

The other instructor who received a permanent GOMOR, Sergeant First Class Michael Squires, expressed relief that Tillis will look into the situation at SWCS.

“We’ve been muted and we’ve been muffled, and our lives have been destroyed because we have done nothing but try to tell the truth,” he said.

On the alleged lowering of standards, he said, “If you just open up a true investigation … you will see that what we’re saying is the truth, and we will have 40, 50, 100 Green Berets saying the exact same thing.”

The Military Whistleblower Protection Act prohibits retaliation by superiors against service members who speak to members of Congress about potential wrongdoing.