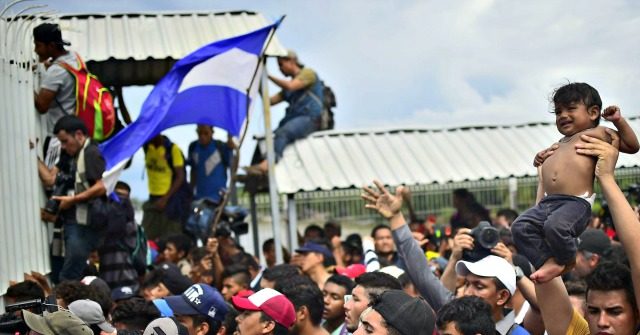 Illegal immigration at the United States-Mexico border could more than double from current rates in the next three months, alone, as President Trump postpones action on the issue for a year.

On Thursday, Trump backed away from previous threats he would shut down the southern border, now giving Mexico a year to clamp down on illegal immigration and drug trafficking before he takes any action against the country.

According to Kopits, over the course of three months, the Trump administration could see anywhere between 450,000 to 500,000 border crossings, a rate of illegal immigration at the southern border that is double the rates between the last three months — when about 195,000 arrests were made between December 2018 and February 2019.

Arrests of border crossers and illegal aliens by federal immigration officials have increasingly resulted in those nationals ultimately being released into the interior of the country, as the Trump administration expanded the Catch and Release policy this year.

“A half million border apprehensions in the next three months would not surprise me,” Kopits told Breitbart News.

“I think the current situation is likely unsustainable and will likely result in a political crisis somewhere before the middle of July,” Kopits continued.

“Were I counseling the president, I would have advised him to close the border now — with good notice to the various parties — but I would have drawn the line here,” Kopits said.

While Trump waits a year to take action against Mexico, there are projected to be potentially one to 1.5 million illegal aliens arriving at the southern border this year, based on illegal immigration and Catch and Release rates from February and March, the most recent months from which data is available.

Meanwhile, U.S. taxpayers are crippled with the burden of absorbing the 11 to 22 million-strong illegal population. In terms of healthcare costs, illegal aliens and their U.S.-born child c0st the American taxpayers about $17 billion a year. Annual illegal immigration costs American taxpayers $116 billion.

The nation’s Washington, DC-imposed mass legal and illegal immigration policy — whereby at least 1.5 million unskilled foreign nationals are admitted to the U.S. every year — is a boon to corporate executives, Wall Street, big business, and multinational conglomerates, as America’s working and middle class have their wealth redistributed to the country’s top earners through wage stagnation.

Abbott: We’re ‘Looking at Other Cities’ to Send Migrants to, We’ll Keep Sending Them Until Biden Admin. ‘Does Its Job’