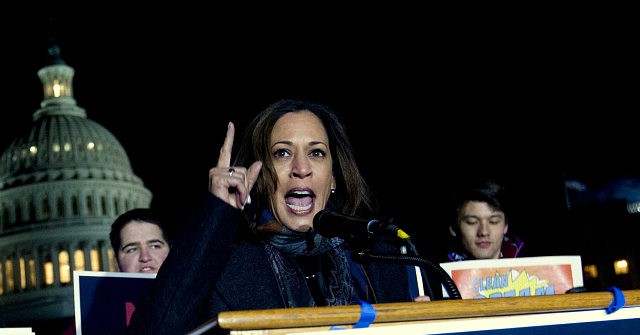 DACA illegal immigrants should be hired to help prepare laws for 330 million Americans, according to a draft bill introduced by Democratic presidential candidate Sen. Kamala Harris (D-CA) and 20 other Democratic senators.

“The giant sign outside my office says ‘DREAMers Welcome Here’ because we know and value the contributions that these young people have made to their communities,” the California senator said in a Wednesday statement about the DACA job offer. She continued:

But right now, those same young people are banned from giving back to their country by working for Congress. That has to change … Government works best when it reflects the people it represents. Our nation’s DREAMers are some of our best and brightest, and it’s time they had the opportunity to get a job or paid internship on Capitol Hill.

“The American Dream Employment Act would expand Congress’ talent pool, give Dreamers a seat at the table, and strengthen policymaking for all Americans,” said Nevada Sen. Catherine Cortez Masto.

“I’ve been proud to have several Dreamers work in my office as volunteer interns and have seen firsthand how the people of Illinois would benefit if Dreamers could serve as paid employees in my office,” said Illinois Democrat Sen. Dick Durbin.

The jobs and status giveaway to DACA illegal immigrants is linked to Harris’s high-profile run for the presidency.

“Kamala Harris is going all in on immigration reform,” said a pro-Harris article in Politico, which also highlighted the claim by open-borders advocates that federal immigration law is “a mean-spirited ban on Dreamers.” The article continued:

It’s the latest move by the California Democrat to seize on an issue that her rival Beto O’Rourke has made his calling card — and to advocate for a Democratic constituency that’s often reduced to a congressional bargaining chip.

Harris is also pushing legislation that would dramatically expand the legal and financial incentives for hundreds of thousands of Indian low-wage college graduates to take U.S.-based jobs from U.S. college graduates. Harris’s mother is from India.

The DACA population was created in 2012 when former President Barack Obama told his deputies to stop enforcing immigration laws against younger illegal aliens. Obama also directed them to hand out work permits to the illegal aliens despite the huge job loses caused by the 2008 crash to blue-collar Americans, and especially on Africa Americans youths.

Roughly 800,000 “DACA” illegal immigrants got the work permits — despite a law saying only Congress can provide work permits.

The resulting increase in the labor supply cut wages for blue-collar Americans and created an incentive for many additional Central Americans to migrate into blue-collar workplaces, neighborhoods, and K-12 schools around the United States. Very few DACA illegal aliens hold white-collar jobs, such as professor, lawyer, journalist, or video editor — although a growing number of white-collar jobs are being lost to Indian visa workers.

The new Harris bill, titled American Dream Employment Act, was also introduced in the House by Arizona Democratic Rep. Ann Kirkpatrick, and it is backed by more than 50 Democrats.

The Harris legislation spotlights the efforts by Democrats to smuggle illegal immigrants into the center of American society despite popular support for immigration laws. Already, several states allow illegal immigrants to take licensed jobs, such as lawyers, in New York.

The move also showcases the Democrats’ view that the United States is a “Nation of Immigrants” — and not a nation created by and for Americans.

The immigrant-first view is increasingly held by college-trained white progressives who play a critical role in the Democratic primaries. For example, survey data shows that roughly 90 percent of white progressives with post-graduate credentials believe any curbs on the immigration of people who are not of European ancestry count as “racism”:

The word racist doesn’t really describe much because people’s conceptions of the word varies a lot and it often devolves into labeling and demonization. The chart below however is very interesting pic.twitter.com/Q6jFHd6W1p

In turn, the white progressives’ pro-migration views are part of a larger shift towards a claim by progressives that they should be given government power to ameliorate racial disparities nationwide, such as racial disparities in wealth, income, and education. The race-based demand for power is not strongly supported by Latino and black American voters and is strongly opposed by the non-college white voters who would lose out in a pro-minority, progressive-run government.

The progressives’ demand for power to remedy racial differences comes as Asian immigrants, including Indians, are outpacing the income of white Americans.

The shift by progressives towards racial politics is called the “Great Awokening” by Vox.com:

In the past five years, white liberals have moved so far to the left on questions of race and racism that they are now, on these issues, to the left of even the typical black voter.

The Harris bill is backed by business groups that want more immigrants to cut wages and to spike revenues. For example, the legislation is backed by FWD.us, a lobbying group created by wealthy West Coast investors, including Facebook’s Mark Zuckerberg.

There should be no penalty for illegal immigration, says Julian Castro, one of the Democrats’ presidential candidates. He also wants amnesty for millions. OK, so offering wage cuts and rent hikes may not be the best campaign tactic, but it is original. https://t.co/ZQJ25AHWkM Scarborough: First Debate ‘a Missed Opportunity’ for Not Going After Biden, Trump | Breitbart