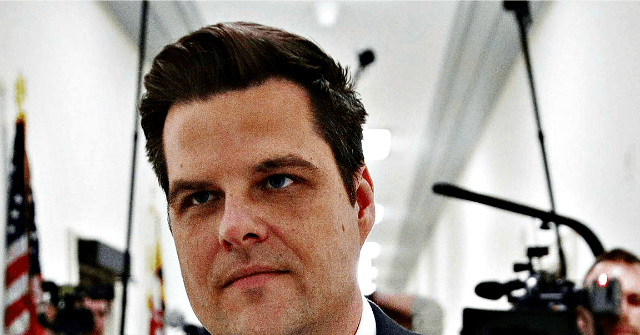 “Today with other members of Congress, I’ll be filing a Green Real Deal — a commonsense rebuttal to the Green New Deal,” he announced at a press conference on Capitol Hill. “The Green Real Deal rejects regulation as the driving force of reform, and instead unlocks the potential of American innovation and ingenuity.”

“The question for America is pretty simple. Either we want a bunch of bureaucrats in Washington telling us what we can’t do, or we empower American innovators to unlock things that we can do,” he continued.

He said his proposal establishes four platforms for American innovators to “utilize, exploit, and deploy for their success.”

For example, he said America led the world on solar, but “right now, our marketshare is collapsing because China robbed American technology, replicated that technology inexpensively, and then replaced American companies in the marketplace.” He said China is doing the same thing with electric vehicles.

He said the second platform is a “modernized electrical grid” for the U.S. He said currently, the American Society of Civil Engineers rates the grid a D+. “If we get this right, if we make the right investments in our grid, then we create an entire class of energy entrepreneurs all over the country, where people can put up solar cells, access hydropower, and then move that power back onto the grid, so that that renewable, cleaner energy can be democratized over wider swaths of the country.

He said the third platform was to “unlock federal lands.”

“Innovators should see our federal lands as an open canvas for renewable energy, research and development, test and evaluation. Instead, a complex series of regulations and special-interest-driven contracting processes limit the ability of our beautiful spaces and our environment to contribute to their continued preservation,” he said.

He said the fourth platform is an inclusive technology doctrine that would underlie an American innovation strategy. He said, currently, the Nuclear Regulatory Commission will not approve “scalable, modular” nuclear reactors. “Our agricultural and tax policies don’t even contemplate the best carbon capture technologies in the world. And hydropower — some of the cheapest, cleanest power you can access in our country – is too often blocked by needless government regulation,” he said.

He contrasted his proposal with Ocasio-Cortez’s plan. A draft of her proposal famously mentioned flatulence from cows and eating less meat.

“The Green Real Deal does not tell Americans what they can, or cannot do. It doesn’t use the apparatus of government to pick winners and losers in a distortion of the private market. The Green Real Deal is a love letter to the American innovator, and it is a real, serious plan to address climate change,” he said.

Gaetz said Ocasio-Cortez’s plan would not combat climate change and would actually hurt the U.S.

“Do we really believe if we outlaw cars, cows, planes, and buildings, the rest of the world will follow? Of course they won’t, they will laugh at us. If we outlaw carbon emissions, do we really think that carbon-creating jobs wouldn’t just move overseas, as they have already done for decades?”

“Is there a single piece of evidence that emerging economies will put off their own economic development for a generation to accommodate an environmental concern, mo matter how legitimate? And if we do not reduce global carbon emissions, if we merely export pollution in service of our own virtue signaling, then we will not have done anything real to protect our beautiful planet,” he said.

He added: “Being the world’s fool, or patsy, will not combat climate change. Unilaterally disarming the American economy through crushing regulations will empower Washington, but few others. Our rise in global leader ship on climate must be fueled by American innovators, and I have a plan to support them.”

He cited recent testimony from the chiefs of staff of the Army, Air Force, and Navy to the House Armed Services Committee, on which he sits.

“In real time, climate change is impacting the strategic decisions that our military makes regarding weapons testing, basing decisions, the global movement of humans, and high-stakes territorial claims made by our adversaries in the arctic,” he said.

“Our military does not have the luxury to have an academic debate about climate change. They must respond to the reality we face today, and so should the United States Congress,” he added.

He warned his congressional colleagues: “History will judge harshly my Republican colleagues who deny the science of climate change. Similarly, those Democrats who would use climate change as a basis to regulate out of existence the American experience will face the harsh reality that their ideas will fail.”