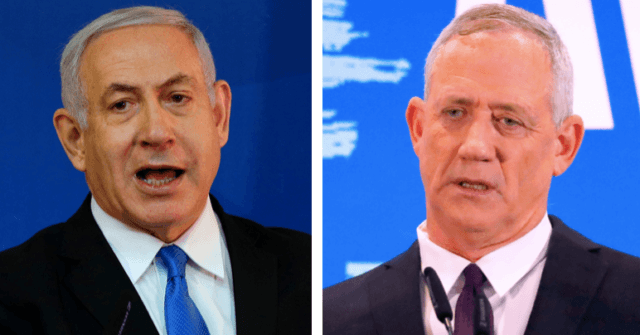 Israeli voters will choose their next government on Tuesday, and opinion polls that once showed Prime Minister Benjamin Netanyahu in trouble now show him as the slight favorite to form a ruling coalition and return for an unprecedented fifth term as its leader.

In a recent interview with the Times of Israel, Gantz compared Netanyahu to Turkish strongman Recep Tayyip Erdogan — an inflammatory claim, given Erdogan’s hatred of Israel and use of antisemitic conspiracy theories.

Netanyahu, Gantz noted, is under indictment for corruption: if he is re-elected as prime minister despite the pending charges against him, that will mean Israeli democracy will have failed, and his power could become unchecked.

But the counter-argument, suggested months ago by Breitbart News columnist Caroline Glick (who later declared her own candidacy in the elections), is that the charges against Netanyahu are completely spurious. Just as the FBI tried to undermine Donald Trump, the charges against Netanyahu appear to have been brought forth by Israel’s own “deep state” in an effort to oust the man whom the country’s left-wing, elite establishment resents for his success.

Indeed, the parallels are striking: Gantz even accused Netanyahu of colluding with the Russians to win the election.

From that perspective, a Netanyahu win would be a victory for Israeli democracy, a way of checking the power of law enforcement institutions that are not subject to real oversight by the legislature, and which made a potentially disastrous decision to wade into Israeli politics.

As he watched President Donald Trump celebrate the findings of Special Counsel Robert Mueller’s report last week that there had been no collusion between the Russians and the Trump presidential campaign, Netanyahu was, no doubt, hoping for his own vindication several weeks hence.

But no matter who wins on Tuesday — and who emerges from the coalition fights that may follow, as the rivals make their case to Israeli President Reuven Rivlin that they should be chosen to form a government — what is most noteworthy about the election is the fact that it is not a contest between left and right, between hawks and doves.

The left remains in retreat in Israel, largely because the central premises of left-wing politics in Israel continue to fail. The Palestinians continue to show that they are not interested in peace, and the healthy Israeli economy shows that Israel’s future remains in private-sector-driven investment, even though the pace of growth has been slowing.

In the United States, opposition to Trump and the Republicans is especially strong among young people. In Israel, opposition to Netanyahu is driven by older voters. A new poll by the Israel Democracy Institute shows that younger voters prefer the incumbent — by a staggering 48-point margin in the 18-to-24 age group, the Times of Israel notes.

If Gantz wins, his will be a victory for the establishment — aided by prosecutors — and not a generational change. That may explain why the Israeli coverage of the election has been so lackluster; it barely merits a major headline.

It is possible Netayahu could lose. If he does, he will be remembered as the leader who stood up to Barack Obama — and who persuaded Trump to deliver major foreign policy victories.

A win by Gantz would not create a rift in U.S-Israel relations, nor change Israeli policies in the region. But it would always have an asterisk.