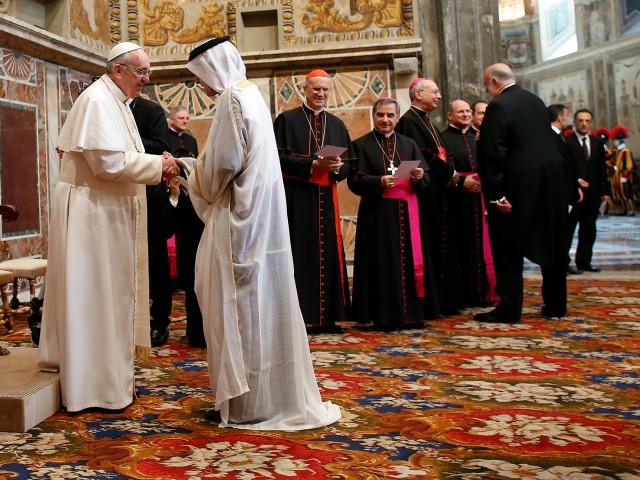 Pope Francis walked back an earlier statement Wednesday on God “willing” a plurality of religions, saying that in reality God only permits the existence of many religions.

In a joint statement with the Grand Imam of Al-Azhar Ahmad Al-Tayyeb, Pope Francis said in February that the plurality and diversity of religions “are willed by God in His wisdom,” just as God wills a plurality of colors, sexes, races, and languages.

This Abu Dhabi declaration elicited a wave of criticism from Catholic theologians, who insisted that such a statement seemed to suggest that either God actively wills error, or that all religions are equally valid paths to God. The existence of a variety of colors, races, and languages in humanity is very different from a variety of contradictory claims about God’s identity and way of acting.

Father Thomas Weinandy, for instance, the former head of the U.S. bishops’ doctrinal office, said he found the statement disturbing for its apparent reduction of Jesus Christ to just another guru or religious leader.

“What I find very sad and scandalously troubling” Father Weinandy told Lifesite News, “is that, in the midst of it all, Jesus is being insulted. He is reduced to the level of Buddha or Mohammed when in fact he is the Father’s beloved Messianic Son, the one in whom the Father is well pleased.”

“The only religions that God positively willed are Judaism and Christianity for he himself founded these religions through his own positive divine actions and revelation,” Weinandy said.

According to many scholars, Islam, for example, was born as a Christian heresy — a perversion of Christianity — and it would be odd if God directly willed for heresy to be proclaimed.

In a series of unscripted remarks Wednesday, the pope attempted to clarify that what God really wills is fraternity among all peoples, while he only permits a plurality of religions.

“Some are born from culture, but they always look at heaven, they look at God,” he said. “But what God wills is brotherhood among us and in a special way – and this is the reason for this journey – with the Muslims, our brothers and sisters, children of Abraham.”

“We must not be frightened by the difference: God allowed this,” the pope continued. “We should be frightened if we do not work in brotherhood, to walk together in life.”

While this clarification is undoubtedly helpful, Father Weinandy suggested, it does not go far enough.

“The problem is that, more than likely, the vast majority of the media and many other theologians and bishops will continue to interpret the original document in the manner that, as God willed Judaism and Christianity, so he also willed other religions – full stop,” he said.

In 2017, Father Weinandy published a forceful letter he had written to Pope Francis, criticizing the pontiff’s “intentionally ambiguous” teaching, scorn of conservatives, and resistance to constructive criticism.

Weinandy made the letter public, he said, because it “expresses the concerns of many more people than just me, ordinary people who’ve come to me with their questions and apprehensions.”

In his letter, Father Weinandy listed five points that illustrate the “chronic confusion” that seems to mark the Francis pontificate, namely, intentional ambiguity, disdain for doctrine, the appointment of heterodox bishops, sowing division in the Church, and vindictiveness in the face of criticism. Axios: ‘Not a Single’ Demographic Trend ‘Favors Republicans’ in Elections