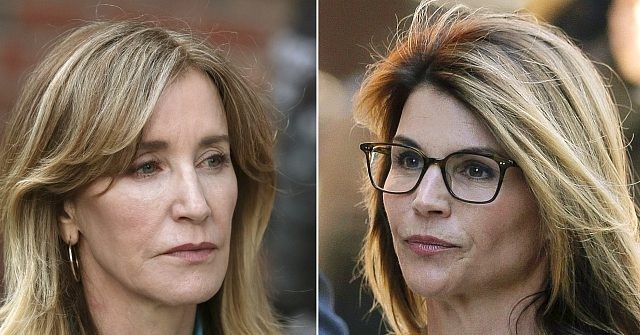 Prosecutors are “determined” to see that Hollywood actresses Lori Loughlin and Felicity Huffman receive jail time for their part in the elite college bribery case, according to a report.

Deadline reported Wednesday that jail time for the actresses appears “more and more likely.” Sources told the Tinseltown-focused website that law enforcement officials have signaled that Loughlin and Huffman could serve between six months and just under two years behind bars. However, their level of cooperation with the investigation will ultimately dictate the length of their sentences and fines, Deadline’s source added.

Loughlin, 54, who appeared in the 1980s and ’90s sitcom Full House, is accused along with her fashion designer husband Mossimo Giannulli of paying $500,000 to get their daughters admitted as recruits to the University of Southern California crew team, even though neither is a rower. Authorities said the couple helped create fake athletic profiles for their daughters by having them pose for photos on rowing machines.

The Hallmark Channel, where Loughlin starred in popular holiday movies and the series When Calls the Heart, cut ties with her a day after her arrest.

Huffman, the 56-year-old former Desperate Housewives star, is charged with paying the admissions consultant at the center of the scheme $15,000 to have a proctor correct the answers on her daughter’s SAT.

The two actresses and Giannulli said little during the brief hearing in a packed Boston courtroom and were not asked to enter a plea. They remain free on bail. Several other parents were given similar hearings of a few minutes each.

The proceedings came three weeks after 50 people in all were charged with taking part in a scheme in which parents bribed coaches and helped rig test scores to get their children into some of the nation’s most selective universities, including Yale, Stanford, Georgetown and USC.

The case — the biggest college admissions scheme ever prosecuted by the U.S. Justice Department — has roiled the world of higher education and amplified complaints the system is stacked in favor of the rich.

'Where Is Peng Shuai?' Protester 'Thrown Down Stairs' of Wimbledon During Men's Final