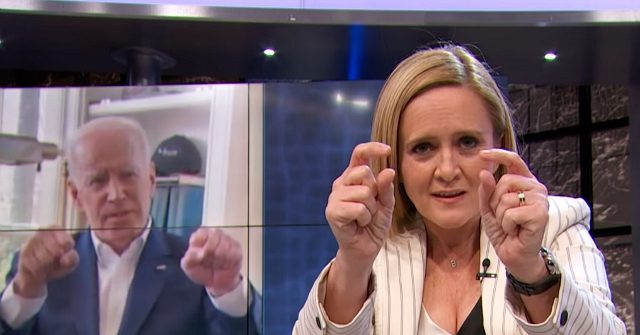 TBS Full Frontal host Samantha Bee mocked Joe Biden’s response to claims he has inappropriately touched multiple women, but admitted that she believed that the former Vice President was being “sincere.”

On Wednesday evening, Biden released a video where he tried to explain his overly intimate public gestures toward people, after at least four women accused him of touching them inappropriately at Democratic campaign events.

“A lot of people are talking about Joe Biden’s video about the way his physical touch has made women and men uncomfortable,” Bee said, before playing a clip of Biden’s apology.

“I, for one, think he’s being sincere,” she remarked, while making a series of lewd gestures with her hands. “If we’re going to move forward, we need to weigh the issues, we need to tweak the conversation.”

The accusations against Biden come at a crucial moment for the 76-year-old Democrat, who is currently leading some polls as he prepares to announce a bid for the 2020 Democratic nomination. According to some reports, Biden was privately “seething” at the allegations.

“By sharing his message on Twitter, Joe Biden is showing us there’s more than one way to reach voters,” Samantha Bee said. “There could be two ways and for some folks even three. Not me, though, I’m fine with two.”

“If Democrats can come together, we can pound the opposition, we can nail this election, really get in there,” she added, while pounding her hands in a penetrative way. “You know, everyone makes mistakes sometimes. Let’s give each other the benefit of the doubt.”

Social norms are changing. I understand that, and I’ve heard what these women are saying. Politics to me has always been about making connections, but I will be more mindful about respecting personal space in the future. That’s my responsibility and I will meet it. pic.twitter.com/Ya2mf5ODts

Earlier this week, Daily Show host Trevor Noah also ripped Biden over his behavior, describing it as “super creepy” and “definitely not OK.”

“I mean, smelling hair is always weird. I don’t care who it is — even if you’re in a relationship, if you smell your girlfriend’s hair, she won’t say anything but in her head she’ll be like, ‘Is he a serial killer?” he said. “Honestly, smelling hair is one of the creepiest things you can do. It’s on the list of creepy things; it’s right after collecting doll parts and sneezing with your eyes open.”