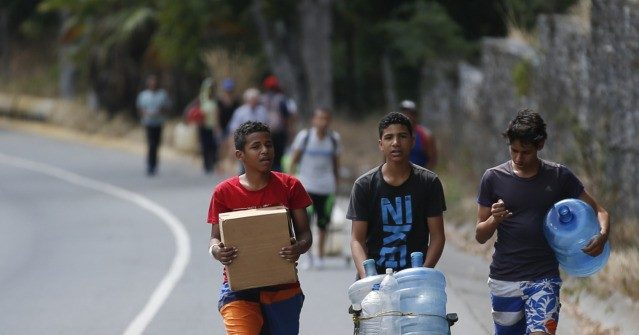 A group of bipartisan Senators has proposed a bill aimed at providing $400 million in humanitarian aid to Venezuela, as well as encouraging more countries to impose sanctions on the country’s socialist dictatorship.

On Wednesday, 15 Senators proposed the Venezuelan Emergency Relief, Democracy Assistance and Development (VERDAD) Act, which involves providing $200 million worth of aid to those inside Venezuela and a further $200 million to countries accepting Venezuelan refugees amid the country’s devastating economic and humanitarian crisis.

The legislation aims to “provide humanitarian relief to the Venezuelan people and Venezuelan migrants, to advance a constitutional and democratic solution to Venezuela’s political crisis, to address Venezuela’s economic reconstruction, to combat public corruption, narcotics trafficking, and money laundering, and for other purposes. ”

The bill also aims to support opposition leader Juan Guaidó, who the U.S. and other Western democracies have recognized as Venezuela’s president, by removing sanctions on officials not involved in human rights abuses if they recognize his legitimacy.  It also encourages a greater effort on behalf of the U.S. to work with regional and European governments to implement their own sanctions against Nicolás Maduro’s socialist regime.

“This legislation will offer needed humanitarian assistance and support for Venezuela’s long path to democratic order,” said Sen. Marco Rubio (R-FL,) who has campaigned tirelessly on the issue of democracy in Venezuela.

Meanwhile, Sen. Bob Menendez (D-NJ) of the Senate Foreign Relations Committee said the proposal is a bipartisan effort “to put teeth behind our support for the Venezuelan people as they seek to restore democracy and prosperity and end the nightmare that has been the Maduro reign of terror.”

“It sends Maduro a message, as well as Russia and China that are helping to prop up Maduro,” Menendez added. “I think we have very good prospects here.”

However, the legislation does not provide temporary protected immigration status, or TPS, to the some 70,000 Venezuelans living in the United States, which would allow them to work or open up a path to citizenship. Dem Rep. Lofgren: Pat Cipollone 'Did Not Contradict the Testimony of Other Witnesses'