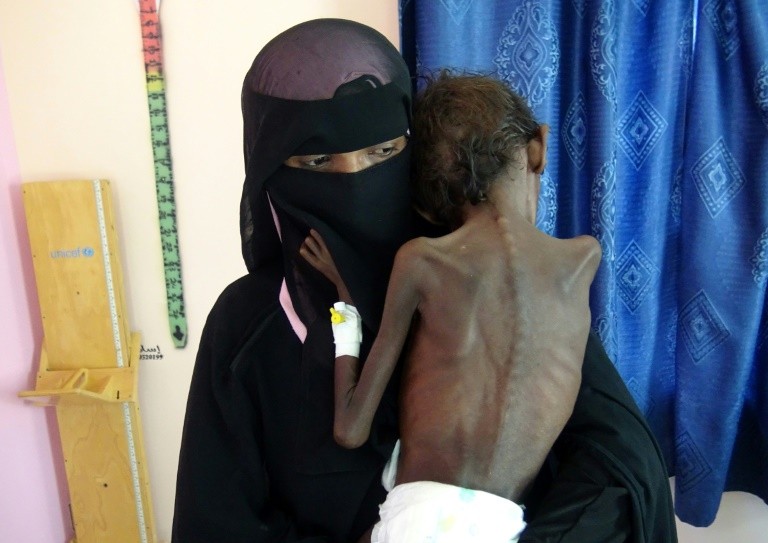 A bipartisan group of lawmakers has banded together, urging President Donald Trump to sign into law the historic War Powers Resolution that hit his desk on Thursday and reject a push from globalist forces for him to veto it.

The War Powers Act passed into law over a presidential veto from then-President Richard Nixon–Congress overrode Nixon’s veto amid national anxiety with war in the wake of the lengthy and unpopular Vietnam War in 1973. It aimed to restrict the powers of the president and keep war-making authority where the founding fathers intended it when they gave that power to Congress in Article I of the U.S. Constitution.

Never since has either chamber of Congress passed a War Powers Resolution reining in the president’s war-making powers since 1973’s passage of the law over Nixon’s veto, until now: Both the House and Senate have passed the War Powers Resolution with regard to the United States’ role in backing Saudi Arabia’s coalition in Yemen’s civil war.

The U.S. involvement, which began illegally under now former President Barack Obama’s administration and has continued–though it has been somewhat rolled back–under the Trump administration, has encompassed refueling of Saudi bomber jets, targeting assistance, and other U.S. actions in the war that have not received approval from Congress.

In the beginning of 2018, a nonpartisan grassroots coalition of unlikely allies from both the right and the left came together to push for a War Powers Resolution reining in the executive branch on the Yemen civil war. The first go-around was unsuccessful in the Senate, but later in 2018, after the midterm elections, the Senate succeeded in passing the measure backed by Sens. Bernie Sanders (I-VT), a Vermont Independent who caucuses with Democrats, Mike Lee (R-UT), and Chris Murphy (D-CT).

In 2019, the effort passed again. Sen. Rand Paul (R-KY), another leading force behind the effort and a top ally of President Trump, said in an interview with Breitbart News that it was an “extraordinary moment” when it passed the Senate because Congress had never passed anything like this before. Much of this same loosely-aligned nonpartisan coalition, which Democratic Rep. Ro Khanna (D-CA) has also been leading as he laid out in an interview with Breitbart News this week, has been backing Trump’s efforts to withdraw from Syria and Afghanistan and to negotiate for peace with North Korean leader Kim Jong-un.

Now that the bill is on its way to Trump’s desk, the president is presented with a unique choice on this front. He could veto it, as many in the establishment seem to be pushing for him to do, or he could buck the D.C. establishment and sign the bill into law–which would be yet another historic win for the coalition that has against all odds turned American foreign policy on its head in just over a year.

Trump has vetoed one bill so far as president: an effort by Congress to roll back his emergency declaration on the U.S. border with Mexico. Congress failed to overturn his veto. While he has used the veto before, as have other presidents, no president ever has ever signed a War Powers Resolution into law.

Trump, who likes to be first and historic, would be able to say–if he embraces this bill and signs it–that he was the first president in U.S. history to ever sign anything like it into law. Politically speaking, it would be very popular in his re-election as well, as this issue–ending endless wars–was a central theme of his 2016 campaign and is a central theme of many of his potential opponents in 2020.

Several congressional leaders on both sides of the aisle–including Republicans and top Trump allies like Sen. Paul and Rep. Matt Gaetz (R-FL)–have signed a letter to President Trump on Thursday urging him to sign this bill into law. The lawmakers wrote to Trump:

As a bipartisan, bicameral group of lawmakers, we respectfully ask you to sign into law Senate Joint Resolution 7, which invokes the War Powers Act of 1973 to end unauthorized U.S. military participation in the Saudi-led coalition’s armed conflict against Yemen’s Houthi forces, initiated in 2015 by the Obama Administration. The passage of this landmark legislation would help advance the aims of your December 6, 2017 directive, which requested that Saudi Arabia “completely allow food, fuel, water, and medicine to reach the Yemeni people who desperately need it.” Unfortunately, the Saudi-led coalition’s imposition of an air-land-and-sea blockade as part of its war against Yemen’s Houthis has continued to prevent the unimpeded distribution of these vital commodities, contributing to the suffering and death of vast numbers of civilians throughout the country. Senate Joint Resolution 7 codifies your administration’s November 2018 decision to halt midair refueling operations for Saudi-led coalition airstrikes, and terminates other unauthorized hostilities initiated by the Obama Administration, such as targeting assistance. The legislation under your consideration for presidential signature has no bearing on U.S. weapons sales to the Saudi Kingdom. We believe the signing of this bill into law would send a powerful signal to the Saudi-led coalition to bring the four-year-old war to a close, thereby ending the world’s worst humanitarian crisis, which has pushed 10 million Yemenis to the brink of famine.

They argue in the letter that Trump could reject the “resistance” within his administration by “some of your subordinates” who are working against him regularly if he backs this new pathway forward.

“Both during your campaign and presidency, you have spoken out against a bipartisan tendency to be drawn into costly and never-ending conflicts across the globe and its devastating impacts for American service members and taxpayers,” the group of members who signed the letter wrote to Trump on Thursday. “You have also expressed public frustration over the resistance by some of your subordinates within the Executive Branch to your efforts to challenge this consensus.”

The members also woite that if Trump signs this bill into law instead of listening to the globalists pushing him to veto it, he would see a “new precedent for cooperation” among both Republicans and Democrats on Capitol Hill in “both chambers of Congress.”

In other words, especially among the Democrat signers of this letter, they are saying if Trump rejects the globalists on this and stands on principle with those pushing to end the Yemen war he would gain an enormous amount of respect from even Democrats willing to work with him on this and perhaps many other issues.

For a president who has been mired in investigation after investigation, this could be music to his ears: He’s now got a shot at working in good faith with Democrats on an issue set they largely agree on: ending endless foreign wars. The letter continued:

We believe that by signing this historic legislation to terminate an unconstitutional war that predates your presidency, you will set a new precedent for cooperation with both chambers of Congress to overcome such entrenched opposition to foreign-policy restraint,” the letter continued. We also hope that such a partnership between the President and Congress to end U.S. involvement in the Saudi-led coalition’s war against Yemen’s Houthis can serve as a bipartisan springboard to achieve our shared interest in responsibly drawing down needless conflicts throughout the world, such as ongoing U.S. military interventions in Afghanistan and Syria.

The members conclude by asking Trump for a meeting as soon as possible to discuss this matter.

“We respectfully ask for a meeting with you at your earliest convenience to discuss this legislation and the promising opportunities that can emerge from its passage,” the members wrote.

While several in the media have suggested Trump may veto the bill, the New York Times reported on Thursday evening that it is thus far unclear whether Trump will.

Rep. Ro Khanna (D-CA), the Democratic lawmaker who organized this letter, said in a quote provided to Breitbart News that he is hopeful the president will stick with his instincts on war like he’s doing with Afghanistan and Syria and sign this bill into law.

“Famine is not an inevitability – it can and it must be prevented before it gets any worse,” Khanna said. “This is a letter sent in good faith, and I’m hopeful the president recognizes that this is a humanitarian issue, like he has done in Syria and Afghanistan, rather than a political one.”

Khanna previously conducted an exclusive interview with Breitbart News on this topic, in which he openly pushed for a bipartisan meeting to work with Trump on these matters. Presumably, if such a meeting happened, signers of this letter are just some of the Democrats who would be willing to work with the president on this front.

Dem Rep. Slotkin: 'We Could Be Doing More' to Address Americans' Needs – 'We Have Got to Address Inflation'