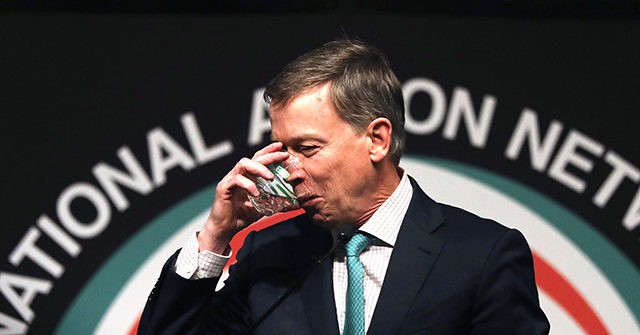 Former Colorado Gov. and 2020 Democrat presidential candidate John Hickenlooper said Friday that he will support legislation to establish a commission to study reparations for black Americans if elected president.

Hickenlooper endorsed the measure while speaking at the four-day conference of the National Action Network, the civil rights organization founded by the Rev. Al Sharpton. The MSNBC host asked whether Hickenlooper would sign such a bill as president, and when he began to equivocate, the crowd became agitated, with one audience member crying out: “Yes or no!”

Hickenlooper begins: “I look at the opportunity to provide every person a real chance….”

Audience member: “Yes or no!”

Hickenlooper, who’d already said in his remarks he would: “YES!”

John Hickenlooper was brutally filibustering on saying he would sign a bill into law if it got to his desk on reparations, after his hallow talk about supporting a Commission study.

“Yes or No” some in the crowd yelled to answer instead of dancing around #NAN #NANConvention pic.twitter.com/eUzsYqhaIf

The bill, sponsored by Rep. Sheila Jackson Lee (D-TX), would “make recommendations concerning any form of apology and compensation to begin the long-delayed process of atonement for slavery.”

Other 2020 presidential contenders such as Sens. Kamala Harris (D-CA), Elizabeth Warren (D-MA) and Cory Booker (D-NJ) have voiced support for the measure. White House candidate Rep. Tulsi Gabbard (D-HI) is a co-sponsor of the bill.

On Wednesday, former Rep. Robert Francis “Beto” O’Rourke (D-TX) came out in favor of it, declaring at the National Action Network conference that he would “absolutely I would sign that into law.”

Later, speaking with Equal Justice Initiative executive director Brian Stevenson, O’Rourke said the word “repair” is foundational to reparations.  “Until all Americans understand that civil rights” also involves “the injustices that have been visited and continue to be visited on people, we will never get the change that we need to live up to the promise of this country. So absolutely I would sign that into law,” the Texas Democrat said.

Julian Castro, who is the most supportive candidate of reparations, said Wednesday that he believes the U.S. “will never truly heal until we address the original sin of slavery.”

In a recent statement to Reuters, Warren said she supports government reparations to African-Americans who were impacted economically by slavery. “We must confront the dark history of slavery and government-sanctioned discrimination in this country that has had many consequences including undermining the ability of Black families to build wealth in America for generations,” Warren said.

“Black families have had a much steeper hill to climb – and we need systemic, structural changes to address that,” she added.

In an interview with the Post and Courier, Clyburn panned “pure” reparations as “impossible to implement.” “[W]e can deal with the issue [of racial inequality] if we just admit, first of all, that it exists and then come up with some straightforward ways to deal with it,” the 78-year-old lawmaker said.

Clyburn said he fears reparations would lead to contested debates about who would be eligible due to the sprawling family trees that have evolved in the generations since slavery was abolished.

Even some white people who have never personally felt the effects of racial discrimination could end up making claims that they have family connections to former slaves, Clyburn said, pointing to some of his own acquaintances in Charleston who he said would fall under that category.

Clyburn’s comments came after Harris said she is “serious about taking an approach that would change policies and structures and make real investments in black communities.”

Clyburn, largely seen as a kingmaker of sorts in South Carolina, a key primary state, voiced satisfaction with Senator and 2020 presidential candidate Bernie Sanders’ (I-VT) proposal to lessen racial inequality. In a CNN town wall, Sanders pledged to apply Clyburn’s “10-20-30” formula to solve poverty in different parts of the country. The policy directs ten percent of federal funds to counties containing at least 20 percent living below the poverty line in the last 30 years.

“To me, that’s a much better way to deal with what reparations is supposed to be about,” Clyburn told the newspaper.