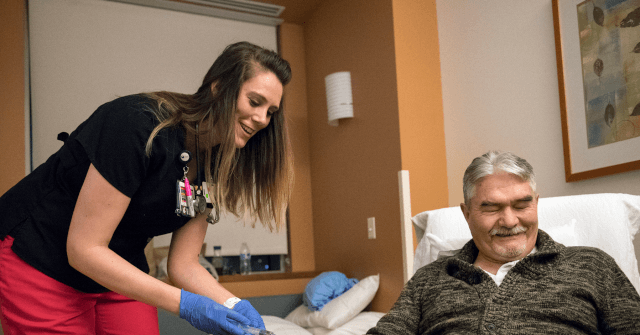 Olsen elaborated on his call for Trump and Republicans to “put care above cost.”

“What [putting care before cost] means is that when people want health care, what they want is security that they are able to get the care they need at a cost they can afford, and they’re not interested in the overall costs,” explained Olsen.

Olsen continued, “They’re not interested in abstract questions of liberty. What they want is to be able to know that they can visit a doctor or be able to go to a hospital when they want it and when they need it.”

Olsen added, “The Republican Party, for decades, has resisted making [care] their primary concern. When they talk about health care, they talk about choice in the abstract without guaranteeing care in the concrete, or they talk about cost in the case of the entitlements crisis without talking about making care the primary outcome.”

“For too many Republicans … it’s about saving money and not about providing people with health care, and that always comes through, and people always react in the same way,” assessed Olsen.

Former President George W. Bush’s expansion of Medicare Part D, appraised Olsen, was an example of a Republican president breaking away from public mistrust of the GOP’s approach towards healthcare policy.

“The prescription drug program, back when it was new in 2003, [George W. Bush] proposed it and was under attack from typical conservative sources,” recalled Olsen. “They were saying the usual things, ‘It’s an inappropriate thing for the government to do,’ ‘It’s the biggest entitlement expansion since the Great Society,’ ‘It will cost way more than expectations because government programs always do that,’ but what Bush did was stand firm in the face of it, and the public supported it because what he was doing was guaranteeing the care upfront.”

Olsen continued, “But because [George W. Bush] was doing something smart, which was not instituting a one-size-fits-all program but using market mechanisms and competitive bidding to actually administer the program … it came in below projections, like the only government program in history to come in below projections.”

Olsen went on, “I think [Medicare Part D] actually helped cut costs even further because we know that prescription drugs are an effective intervention, and I suspect that the lull in Medicare cost increases that flummoxed a lot of healthcare experts a few years after [Medicare Part D] came into effect was — in part — that people were going into the hospital less because they were getting health care taken care of more cheaply through prescriptions.”

“But the key to that was putting care first,” concluded Olsen. “[And] ignoring the questions on cost as a primary concern and making it a secondary concern, and that provided the political juice to get the plan through, and then you get all the conservative benefits on the back end.”

Olsen remarked, “The Republican Party has been the minority in America for 87 consecutive years. If Americans cared most about fiscal discipline, that wouldn’t be the case. If Americans cared most about protecting the pre-New Deal Constitution, that wouldn’t be the case, but yet those are always the arguments that conservatives trot out, and they always lose in the long run and then they wonder why.”

Olsen stated, “The argument that Ronald Reagan advanced was, ‘Let’s take the New Deal and flip it on its head’ was what allowed him to make the massive policy advances he did, and it was the only time in the last 87 years when the Republicans closed the gap on the Democrats in party identification. Maybe we should learn from the master.”

“Time and time again, we have proven that if Americans have to choose between socialism and libertarianism, they will choose socialism,” arraigned Olsen. “So maybe we shouldn’t give them that choice.”

Olsen said, “[Republicans] have to say, ‘We care more about care than we do about cost or about abstract questions of government power.’ Once you reach that hurdle, there are tons of ideas that will improve delivery of health care and improve outcomes at a lower cost and squeeze the special interests. But what you to do is put patient care and patient health as your primary priority.”

Trump must “compete for the center” on health care and other issues to expand his political base of support for 2020’s forthcoming presidential election, determined Olsen.

“If I were President Trump, I would stop running a base-only strategy,” recommended Olsen. “He’s got 43 percent of the vote. What he needs to do is start getting that up to 46. That means he needs to be talking to the Latinos. He needs to be focusing on issues that have bipartisan appeal like health care, and forcing the Democrats to either tell him, ‘No’ — which makes him more reasonable in the eyes of the center — or fight amongst themselves to say, ‘Yes.’ If he tried to occupy the center — or at least compete for the center on a regular basis — that would divide his enemies and it would get people in the middle to look at him in a new light. If the president doesn’t want to do that, he’s going to go into the election with his 44, 43 percent, but then he’s going to be dependent on who the Democrats nominate for victory.”