Exclusive–Kris Kobach: I Would 'Certainly Consider' Being Trump's 'Immigration Czar' 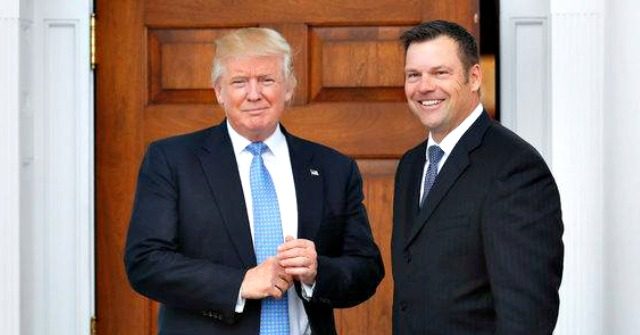 Former Kansas Secretary of State Kris Kobach told Breitbart News that he would most certainly “consider” serving as President Trump’s “Immigration Czar” following rumors that he could be appointed to such a position.

During an exclusive interview with SiriusXM Patriot’s Breitbart News Tonight, Kobach said his considering being Trump’s Immigration Czar would depend on the details of the job and whether the position would allow him to enact swift policy changes to stem soaring illegal immigration levels.

Well, if the president feels the need to tap me to serve, I’m certainly going to consider that … I’ve advised the president for years now and obviously want to help him and the administration and the country. [Emphasis added]

As far as the czar position goes, it depends on whether its a truly effective position. We’ve had … Obama created a bunch of czars, Bush had a couple. Some of these czars are just little more than a White House policy position that doesn’t really have any authority to execute and do anything. And so the devil is in the details. If this is just a position or an adviser who has a fantasy title, then no it probably won’t solve much. But if the position has the weight of the president and the authority to tell various cabinet agencies what needs to be done, then actually it could be effective. [Emphasis added]

Rumors first circulated this week that Trump is considering Kobach or former Virginia Attorney General Ken Cuccinelli to be an Immigration Czar. As Kobach notes, though, there has yet to be a plan from the White House that gives insight as to what the position would have authority over.

“It’s not clear to me what plan, if any, there is to create such a position,” Kobach said.

Insiders have told Breitbart News that the Immigration Czar role could be one of two roles: An adviser to Trump on immigration that works to coordinate policy between multiple federal agencies, or a subordinate job to sitting Department of Homeland Security (DHS) Secretary Kirstjen Nielsen.

One America News‘s Ryan Girdusky told the National Interest Kobach serving as Trump’s Immigration Czar to coordinate policy between multiple federal agencies is crucial to not only quickly implementing executive actions on illegal and legal immigration, but also to drive up base support for the president in the upcoming 2020 election.

“It’s vital that this administration brings in Kobach,” Girdusky said. “He understands the issue and Trump’s base—far more than most people in Trump’s administration.”

“Kobach would actually ensure that our immigration laws are enforced, our border is secure, and signal to Trump’s base that he hasn’t abandoned us on the issue — which is vital leading up to 2020,” Girdusky said.