Joe Biden: I'm Not a 'Moderate,' It's Just That 'Progressive' Became 'Socialist' 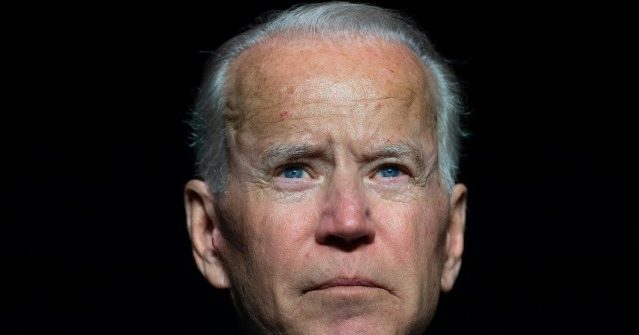 Former vice president Joe Biden offered a hint of his strategy for an impending 2020 presidential run on Friday, telling reporters that he is not “moderate,” but that the “progressive” wing of the party is further left than its voters.

Biden’s remarks were an effort to establish his ideological credentials — and also a challenge to his rivals, especially Sen. Bernie Sanders (I-VT), all of whom have adopted far-left policies in the early days of the Democratic primary.

Biden spoke to reporters in Washington, DC, after addressing the International Brotherhood of Electrical Workers:

REPORTER: Mr Vice President, you said two weeks ago that you said you were the most progressive person in the Democratic Party —

BIDEN: Well, here’s the point. That’s changing too. For my whole career, I wish had been labeled in Delaware for the seven times I ran as a moderate. I was never labeled as a moderate.  And if you look at my record with the ACLU, if you look at my record with all of the traditional liberal organizations, I’ have never walked away from — I’m not sure when everyone else came out and said they are for gay marriage, I’m not sure when everyone else came out and talked about a lot of things I talked about. But my point is, is the definition of “progressive” now seems to be changing. That is, “Are you a socialist? Well, that’s a real progressive.” Or you believe in, whatever. So I was talking about up until this last time around the traditional judgments of whether or not you were, quote, a “liberal,” was whether or not — what your positions on race were; on women; what’s your position on LGBT community; what’s your positions on civil liberties, you know. I’ll stack my record on those things against anybody who’se even run, who’s running now, or who will run.

REPORTER: But sir, are you suggesting the party is moving too far to the left?

REPORTER: Can you win in a primary?

BIDEN: We’ll find out if I can win in a primary. But let me say one last thing. Here’s the deal. I think you guys, if you look at all the polling data and look at the actual results, the party has not moved to the way — however you — I don’t want to characterize it, whatever characterization you just made. The fact of the matter is, the vast majority of members of the Democratic Party are still basically liberal to moderate Democrats in the traditional sense.  … So the idea the Democratic Party has sort of stood on its head, I don’t get it. And by the way, we should welcome, the party should welcome this — I don’t know how you want to characterize it, the “progressive” left. It should be welcome. We should have a debate about these things. That’s not a bad thing. But the idea, all of a sudden, the Democratic Party woke up, you know, everybody asked me now, what kind of Democrat — I’m an Obama-Biden Democrat, man. And I’m proud of it. Thank you.

In effect, Biden was saying: “I have never been a ‘moderate,’ and I am a ‘progressive,’ which used to be understood as ‘liberal.’ But today, the definition of ‘progressive’ has become ‘socialist.’ That’s not what I am, and it’s not what the party’s voters are. They are ‘liberal’ or ‘moderate’, the same coalition that elected Barack Obama and myself, twice.”

Biden has not officially announced that he is running for president, but his candidacy is imminent. In his speech, he attempted to dismiss controversy about his habit of unwanted touching of women and children by joking about it. Brzezinski on Buttigieg: 'He Exposed Hate with Love'