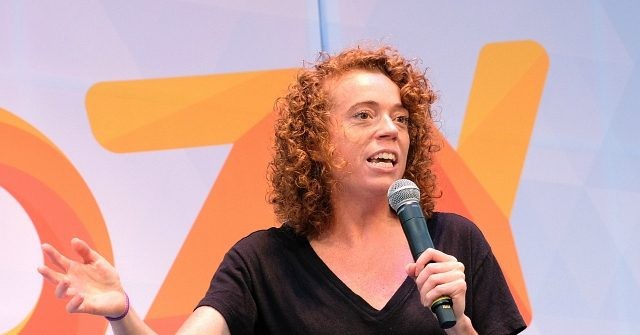 “You got to love someone that just can’t handle being made fun of,” Michelle Wolf told Variety at Lifetime’s “Power of Women” event.

“I think he doesn’t have a big enough spine to attend. If a president can’t take someone making fun of them, I don’t really care about ’em.”

“I actually really like Sarah. I think she’s very resourceful. Like she burns facts and then she uses that ash to create a perfect smokey eye…like maybe she’s born with it, maybe it’s lies. It’s probably lies,” she said.

In late 2018, the White House Correspondents’ Association announced that 2019’s dinner would not feature a comedian at the dinner, as is customary in recent years. Wolf lashed out in response, saying, “The @whca are cowards. The media is complicit. And I couldn’t be prouder.”

The @whca are cowards. The media is complicit. And I couldn’t be prouder. https://t.co/OOIFGuZ731

Trump has never attended the WHCD as president. He told reporters Friday that he won’t attend this year’s dinner, either.

“Everybody wants it, it’ll be a big one, but the Correspondents’ dinner is too negative…I like positive things, OK?”