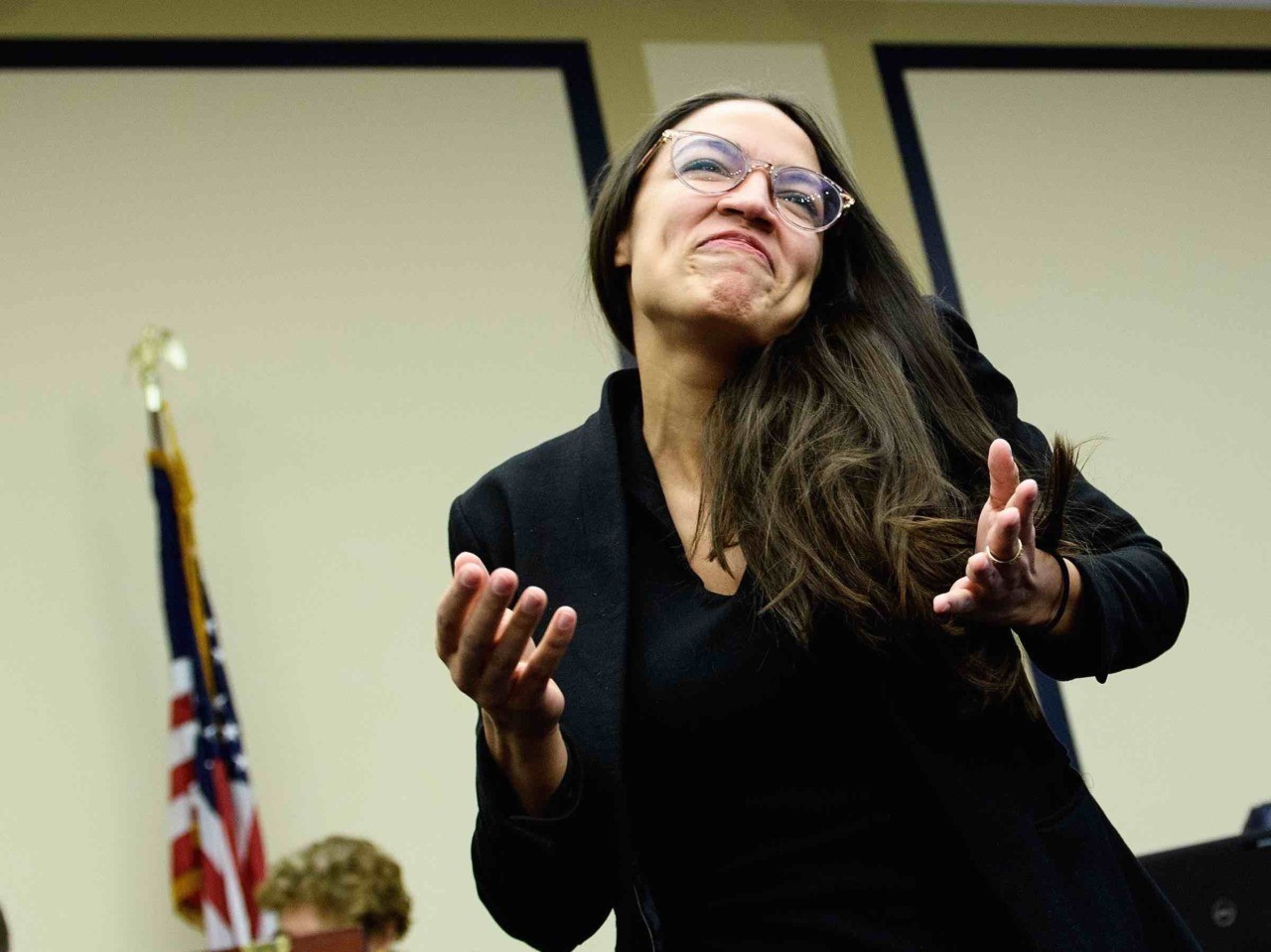 The Pentagon should draft all “genders,” not just men and women, according to New York Rep. Alexandria Ocasio-Cortez.

She casually spotlighted her revolutionary rejection of biology, sex, and the male-or-female society during a live Facebook chat in which she was asked about her views on the military draft. “As long as we have a draft, I support people of all genders being drafted,” she said.

Male and female are the two sexes — but transgender advocates now claim more than 50 “genders” — including agender, bigender, gender fluid, gender non-conforming, genderqueer, intersex, two-spirit, etc, plus “cis-gender” for the 99+ percent of people who are normal, non-transgender people

Me on snapchat trying to be cute & profound at 2 am after one too many vodka sodas while stuffing my face with pizza. pic.twitter.com/DqavrVCHiq

This rejection of male-and-female society — including singles, parents, and children — is now the norm in the new Democratic Party, which has embraced the transgender ideology.

That ideology says each persons’ preferences are — and should be — unconnected from their bodies. It says that men and women are interchangeable, and can switch their sex by switching their own sense of “gender identity” so that men who say they are women really do become biological women, complete with female penises.

Also, progressives want the government to clear away the “social construction” — laws and civic norms — which supposedly prevent small women from wrestling large men to the ground, and which deter large men in tutus from trying to Jette far above tall female dancers.

For Democrats, this wave or new regulation, censorship, and civic pressure will free the less-than-one-percent of people who say they are transgender from the oppressive, outdated rules of male-dominated supremacy. People will discard the oppressive “gender binary” of male or female sexes and will embrace the freedom of new “genders” — transgender, bi-gender, non-conforming, etc, etc, etc., progressives say.

During @HouseJudiciary today, I shared why the #EqualityAct is so personal to me and my family. My child is finally free to be who they are. With that freedom comes a responsibility, for us as legislators, to legislate with love and not fear. pic.twitter.com/VfpiD9aDyY

In contrast, conservatives say that men and women are legally equal, but their bodies give them different and complementary skills, abilities, and preferences. For example, conservatives point out that men tend to be stronger and will aggressively compete against other men to support their wives and children, while women have the remarkable ability to grow babies and moderate male aggression. Teenage boys and girls also compete and cooperate among themselves in their very different ways, while also finding much time to cooperate across the sexual divide.

Conservatives also point out that transgenderism requires intense government regulation of society to prevent women from ejecting men from their showers and bathrooms, to stop girls complaining when teenage boys run away with the sports titles, and to block female students when scholarships for women go to men.

Rep. Jayapal (and nearly all Dems.) feels Congress must tightly regulate all 330M Americans to ensure “freedom” for the less-than-1% of people who wish to switch their sex. But the imp. news is that GOP Leaders have begun opposing the transgender ideology. https://t.co/o80TXo9xzR

Democrats are fast discarding this ancient understanding of the two sexes.

On March 28, for example, nearly all House Democrats — including Ocasio-Cortez — backed a resolution calling on the Pentagon to recruit “transgender” people who openly insist they are members of the opposite sex.

Resolved, That at the House of Representatives—

(2) rejects the flawed scientific and medical claims upon which it is based; and

Only one Republican denounced the contents of the resolution, Missouri Rep. Vickey Hartzler.

In contrast, House Speaker Nancy Pelosi, Majority Leader Steny Hoyer, and other Democrats lashed at the GOP. The Pentagon’s decision to define soldiers’ sex by their biology “is an act of cruelty … [and] bigoted,” said Pelosi. It “violates every value of American democracy … [it]would undermine our military readiness … [it is] prejudice, not patriotism … We will never allow hate and prejudice to dictate our national security,” Pelosi said.

Polls show the transgender ideology is deeply unpopular, especially among women and parents.

In 2017, former President Barack Obama told National Public Radio that his promotion of the transgender ideology made it easier for Trump to win the presidency. Multiple polls show that most Americans wish to help and comfort people who think they are members of the opposite sex, even as they also reject the transgender ideology’s claim that a person’s legal sex is determined by his feeling of “gender identity,” not by biology. A U.K. survey shows a similar mix of some sympathy for people with lopsided opposition to the ideology.

The transgender movement is diverse, so its different factions have different goals and priorities. It includes sexual liberationists, as well as progressives, plus feminists who wish to blur distinctions between the two sexes, and people who glamorize the distinctions between the two sexes. It includes high-profile children, people who are trying to live as members of the opposite sex, people trying to “detransition” back to their sex, men who demand sex from lesbians, masculine autogynephiles who say they are entitled to women’s rights, wealthy donors, politicians, political professionals, and revenue-seeking drug companies and medical service providers.

Transgender advocates claim that two million Americans say they are transgender to a greater or lesser extent. But very few people who describe themselves as transgender undergo cosmetic surgery of the genitals. Only about 4,118 Americans surgically altered their bodies in hospitals from 2000 to 2014 to appear like members of the opposite sex, according to a pro-transgender medical study.

Yet the gender ideology is rapidly gaining power, aided by huge donations from wealthy individuals and medical companies. In February, for example, an Ohio judge forced parents of a teenage girl to give up custody so she could begin a lifetime of drug treatments and surgery that would allow her to appear as a male.

The progressive push to bend Americans’ attitudes and their male-and-female civic society around the idea of “gender identity” has already attacked and cracked many of the popular social rules that help Americans manage the cooperation and competition among and between complementary, different, and equal men and women.