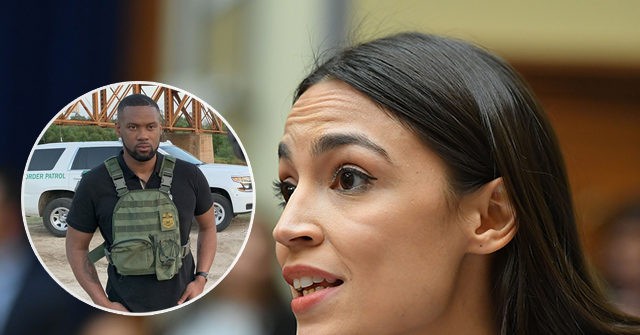 Rep. Alexandria Ocasio-Cortez (D-NY) on Thursday mocked Fox News correspondent Lawrence Jones for wearing a bulletproof vest while reporting from a portion of U.S. Southern border where a shooting had recently occurred.

“Does ‘live from the border’ mean Party City?” Ocasio-Cortez tweeted with photos of Jones in the green vest provided by the U.S. Customs and Border Protection (CBP). “Fox is really out here doing the most on a budget to make the border look more dangerous than it is,” the freshman congresswoman added.

Does “live from the border” mean Party City?

Following Ocasio-Cortez’s post, Jones appeared on the Fox News Channel, explaining to host Sean Hannity that CBP agents advised that he don the protective garment to keep him safe because “just two months ago, there was a shooting.”

.@LawrenceBJones3 on viral bulletproof vest pic: CBP “told me to put it on to keep us safe here. Just two months ago, there was a shooting. … We control this side of the border, but the cartel controls the other side of the border. There’s been gun fights.” pic.twitter.com/71BeGMCBZd

Easy. The agent standing right in front of me RIGHT NOW said, “when you’re with me I’m responsible for your safety. So you’re putting on a vest.” https://t.co/hHbxZc5EML

He responded directly to Ocasio-Cortez’s mockery, challenging her to meet with Border Patrol in the area.

Congresswoman, I’m sure the Border Patrol Laredo Sector, would be happy to give you a full briefing on the crisis here on the border. How about you join me & see for yourself. We just capture 8 illegals 3 minutes ago. Thankfully they weren’t armed like the others 2 days ago. https://t.co/1Vegeth3Cl

Ocasio-Cortez wasn’t the only person to mock Jones. Political commentator Roland Martin, who was suspended and later resigned from CNN amid accusations of encouraging violence against gay men in a 2012 tweet, suggested Jones wore the vest to boost his “speaking fees.”
“Y’all need a good laugh? Look at this. Lawrence thinks he’s headed to a war zone. Is this gonna increase your speaking fees, Lawrence? Game recognize game,” Martin tweeted with the hashtag #AllAboutTheBenjamins.

“Border patrol made me wear it. Now, who’s the fool?” Jones shot back at Martin.

Border patrol made me wear it. Now, who’s the fool? https://t.co/8ytTDLATth

MSNBC correspondent Jacob Soboroff apparently set off the dogpile of Jones’ photo, saying wearing the vest was “totally ridiculous.”
“I have never once worn a bulletproof vest at the border, nor has CBP ever asked me to — even while on a chase with Border Patrol to apprehend migrants in remote Arizona desert in the middle of the night,” said Soboroff.

This is totally ridiculous.

I have never once worn a bulletproof vest at the border, nor has CBP ever asked me to — even while on a chase with Border Patrol to apprehend migrants in remote Arizona desert in the middle of the night.

Not much to say. @jacobsoboroff is lacking information on the border region and he’s making blanket statements and generalizing to the point of being inaccurate. https://t.co/Sb2ye5xRfM

Ocasio-Cortez’s tweet came one day after the 29-year-old claimed in an Instagram Live video that CBP officials are “injecting kids with drugs” based on their “national origin.”

“At least I’m not trying to cage children at the border and inject them with drugs. That’s not a mistake, that’s just hatred,” the New York Democrat said on Wednesday.

She has called for ICE’s abolishment numerous times.

Ocasio-Cortez has also suggested illegal alien border crossers are “more American” than President Donald Trump’s supporters, and has called for illegal aliens to be allowed to enter the United States without legal repercussions. CNN’s Rye to Evangelicals: ‘Nothing About Christ’s Words’ Align With Trump | Breitbart Oakland Mayor: 'Oakland Needs More Police' and 'Defund Rhetoric' Makes It Harder to Do That, 'We Need State and Federal Resources'