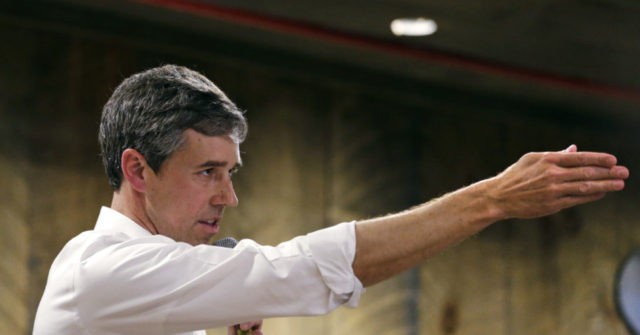 O’Rourke told a small group that he’s going to give them a story from just after the president was sworn into office:

Every year that I was in Congress we would go to a different elementary school around Valentines Day and pick up Valentines Day cards for veterans that were hand-drawn by a second grade or third grade classroom and then we would take them over to the VA. We want to make sure that those veterans understood the generation coming up cares for them and is grateful for what they’ve done for this country.

He then recounts the words of a little girl he described as Mexican-American. O’Rourke said she asked why the president doesn’t like her. He said he asked himself, “What is that doing to her head and her conception of herself and what she’s able to contribute to this country when the President of the United States has called Mexican immigrants rapists and criminals?” He hit the president further saying, “He went on to call asylum seekers ‘animals’ and an ‘infestation.’”

“Now we would not be surprised if in the Third Reich if other human beings were described as an infestation, as a cockroach, or a pest that you would want to kill, but to do that in 2017 or ’18 in the United States of America doesn’t make sense,” said O’Rourke.