'Shazam!' Review: Not Another Origin Story 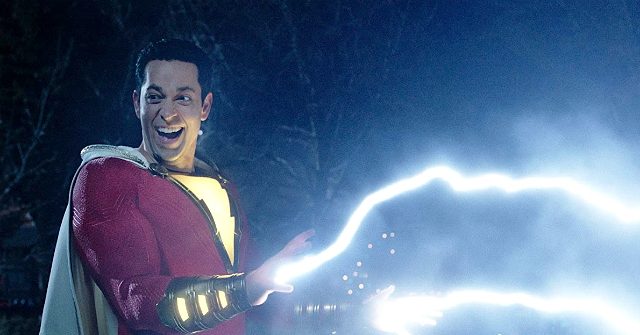 But wait, Joker is coming and isn’t Hellboy a reboot — and did that Shyamalan guy really need three movies to origin Bruce Willis?

We’re a dozen years into the superhero craze launched by Iron Man in 2008 and still being bludgeoned with origin stories; five in the last five months (yes, I’m counting Glass — the 20-year water torture of origin stories).

When do we run out of superheroes to origin? Does anyone know? Anyone have a date? If I could only have something to hold on to, a light of some kind on the horizon, even if it’s years from now, many years from — even if it’s after my death…  Someone please just tell me it’s going to stop.

Hey, I know these movies all make buttloads of money — whoo hoo, money!

Shazam! is one of those schlub-gets-superpowers origin stories — you know, like Deadpool and Ant-Man. Except he’s a teen like Spider-Man, and a foster kid, so that’s kind of like Batman, but his powers resemble those held by Superman — flight, invulnerability, speed. And then you throw in the central premise from the movie Big and what you get is Shazam, a superhero who really does look like a big, gay Superman.

So we are back in the DC Universe and there are ancient symbols that unlock a secret door to a secret chamber that holds something called the Rock of Eternity (which sounds like a great AC/DC album) guarded by Shazam, an aging wizard (Djimon Honsou) whose powers are draining — which means he cannot keep the Seven Deadly Sins imprisoned much longer.

So the wizard is recruiting; snatching kids from earth and bringing them to his secret chamber to test their personal character. To take his place, Shazam needs a child of about 12 with a pure heart, which is a bit futile in the age of the Internet.

Billy Batson (Asher Angel) lost his mother (literally) at a winter carnival and is now a troubled foster kid determined to find her. After getting in trouble with the police (again), he ends up in the care of Victor and Rosa Vasquez (Cooper Andrews and Marta Milans) who run the Woke Foster Home of Identity Politics:

I kept waiting for the trans boy with a harelip to pop out of the bathroom.

You’ve probably already guessed that Billy ends up replacing the wizard, which means that every time he says the word “Shazam!” he turns into a 30-ish guy (Zachary Levi) who wears a super suit so tight you can guess his religion*.

This means that Billy is now a teenage boy in a grown man’s body with tremendous powers. Now he has to master those powers and fight a deadly (dull) super-villain (a wasted Mark Strong) controlled by the Seven Deadly Sins, who have been unleashed.

CGI to follow. But never any tension or sense of peril.

Shazam! isn’t a bad movie. For the most part it holds your attention. It’s also nothing special and doesn’t make much sense. For example, if the Seven Deadly Sins have been imprisoned, why is the world like it is — full of sin? And after the Seven Deadly Sins are unleashed, wouldn’t the world change — be more fun, or something?

The Billy Batson character is all over the place. He’s actually more mature as a teenager. It’s only when he becomes Shazam that he acts like a Deadpool who’s never opened a Playboy.

And the less said the better about the ridiculous resolution of the subplot with his birth mother.

Naturally there’s a Woke Moment. Shazam rushes to save a woman from a mugging but she’s already saved herself because she doesn’t need his toxic masculinity because women are mighty n’ stuff.

To be fair, though, that’s a minor annoyance. Shazam! is a whole lot more fun than Brie Larson’s humor-free Captain Marvelette, which co-starred Samuel L. Jackson and the six-foot steel rod jammed up her backside.

Shazam! won’t bore you (much). The kids are adorable. There’s some laughs. The theme is all about family. There are two or three post-credit sequences. But I promise you’ve seen this movie before — and more than once.

Joe Biden: 'We're Not Going to Be in a Recession'