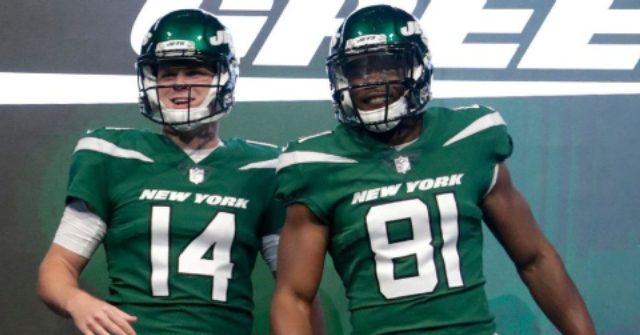 It’s always a risky move, when professional sports teams switch uniforms. Rarely, if ever, does anyone ever completely love the new uniforms. Especially if the old unis are considered “classics.”

However, normally at least someone likes the new threads. And a day after photos of their new uniforms were leaked, the Jets are still looking for that someone.

Here are the new unis the Jets will be sporting this year:

While the players appeared to approve of the new duds, Twitter had a decidedly negative reaction:

The Jets show off their new uniforms pic.twitter.com/TEYXQeprz2

The New York Jets uniforms have leaked, and I can’t say I’m a fan of them. 🏈 pic.twitter.com/rxg1C5X3Kb

The New York Jets new uniforms are getting panned.

One smart-ass said they look like the football uniforms of a team from the future in a really bad video game.

OK, that smart-ass was me.

Looks like what would happen if Eastern Michigan and North Texas had sex. Jets are winning State this year. https://t.co/DhUI4zTzFd

I just drove by #Jets headquarters in Florham Park. I thought the traffic signal had changed but it was just the glow from the new uniforms. https://t.co/39x1nKl81n

Okay I exaggerated, there is someone who likes the new Jets unis:

I realize social media is not the right place to weigh in on any subject that pops into my head but I like the new Jets uniforms. Breitbart News Daily Podcast Ep. 179: Eva Vlaardingerbroek on the Plight of Dutch Farmers and the Global Fight for Freedom