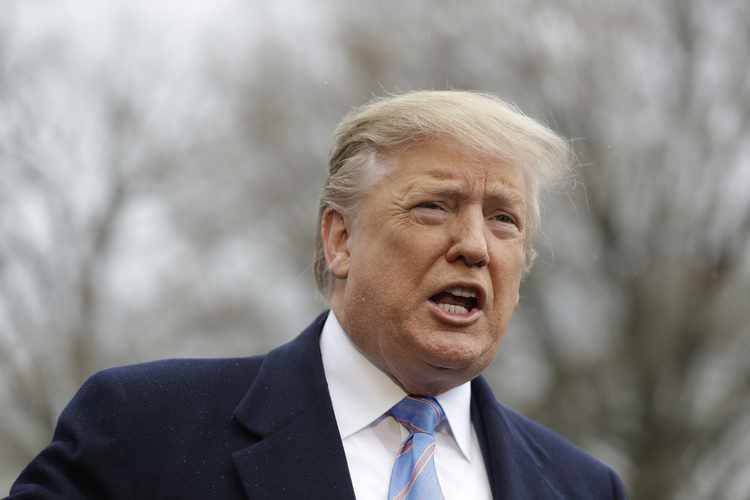 In the military, they call it “firing for effect.”

An artillery battery is fired at a suspected target to see if the enemy moves out of hiding, and how heavily the fire is returned. It’s a way to quickly assess battle lines and enemy strength without too much reconnaissance, but only works if it’s worth giving away one’s own  position.

Over the last week, as Donald Trump has launched broadsides on health care and the border, Republicans are increasingly describing the president’s salvos in similar terms.

Only in their view, his go-it-alone approach and failure to coordinate on both the health care and border fronts resulted in friendly fire casualties, causing Trump just days later to beat an awkward and hasty retreat, weakening all Republicans’ strategic positioning in the process.

Always aggressively on the advance, Trump is in the White House today precisely because he doesn’t cede ground to opponents, operating in constant combat mode. The bold, forceful approach is something Democrats found lacking in President Obama’s all-too-sublime — sometimes even aloof — approach to political strategy and working with other party leaders and Capitol Hill.

And there have been times in which Trump has successfully smoked out Democrats’ weaknesses by tossing political grenades their way, usually on Twitter after seeing reports on cable news. As David Marcus has noted in the Federalist, Trump isn’t just watching TV and surfing Twitter, as critics assert; he’s researching and influencing.

“He is seeing what attacks of his are landing, and what attacks against himself he can expect,” Marcus wrote, giving the president credit for being his own comms director and dominating the political narrative like no politician before.

For example, after Nancy Pelosi disinvited Trump from the State of the Union while the government shutdown continued, he grounded her Middle East trip, literally sending the airport-bound speaker and her delegation home to unpack. The move was a burst from a political flamethrower, to be sure, and it set Twitter on fire – with plenty of his supporters among those joining the fray.

What’s more, even some of Trump’s biggest GOP critics, who had been busy lighting him up over the shutdown, took a moment to delight in the gutsy counterpunch.

This past week was not one of those times. At a time when Trump and his base were celebrating the no-indictment conclusion to Special Counsel Robert Mueller’s two-year investigation, the president squandered his own reset: the opportunity to rally Republicans to his side and build a more united front heading into the 2020 campaign.

The 400-page Mueller report, which will be released soon, will undoubtedly fill the headlines once again, with Democrats arguing that the obstruction evidence and other details are far more damaging than Attorney General William Barr let on. The past two weeks were a short window of opportunity for uniting the party, which many Republicans say was botched.

As he’s demonstrated time and time again, Trump is skilled at tapping into public anger over the Washington status quo but less adept at channeling it. After all, governing and building coalitions is dull, tedious work.

Instead of focusing on Democrats’ internal conflicts, their leftward lurch on socialism, the improbable Green New Deal and late-term abortions, which Republicans in Congress were working overtime to highlight, this week Trump launched a foray on an issue – health care — Republicans had already tried and failed to wrest from Democrats, and he created a new border-related crisis that divided his own party.

The administration went on the Obamacare attack last week when the Justice Department joined a lawsuit to invalidate all of the Affordable Care Act – even the popular protections for pre-existing conditions. Trump then promised a GOP replacement plan before the 2020 election – one he tasked Senate Republicans with formulating to make the GOP the “party of health care.”

His fellow Republicans collectively groaned. The Senate couldn’t repeal and replace the ACA when it only had a third of sitting Republicans up for re-election leading into 2018, compared to Democrats. The GOP will have to defend nearly twice as many seats as Democrats in 2020, guaranteeing gridlock and division on the Republican side of the aisle on health care and other hot-button issues.

It took a few days, but Trump saw the light and publicly agreed that it would be better to work on health care after the election, not before. Still, the damage was done and the political seams were revealed for all to see — and Democrats to attack, which they have done with gusto.

In fact, when House Democrats on Wednesday brought a resolution to the floor condemning Trump for asking the courts to throw out Obamacare, eight Republicans voted with them.

Then came a new ultimatum over the border. Early this week Trump said that he was “100 percent” certain he would shut down the U.S. border with Mexico to block a rising influx of immigrants crossing into the country illegally. And he renewed his threat to Congress.

“If we don’t make a deal with Congress, the border’s going to be closed,” he told reporters in the Oval Office. “100 percent.”

As with the earlier government shutdown over funding a border barrier, Sen. Majority Whip John Thune said he doesn’t believe shutting the border does anything to force Democrats to the table on immigration reform or to help stop illegal immigrants from crossing into the country.

“One, I don’t think it accomplishes the purpose,” he told RealClearPolitics. “It forces people to the unsecured areas coming across, but they are still going to be coming.

“Two, it makes it very hard to conduct bilateral trade, and that’s awfully important for agriculture and other sectors of the economy.”

Thune, however, said he understands the president’s frustrations with Democrats’ intransigence on immigration reform, which he called a “huge crisis.”

Mitch McConnell didn’t even try to play along with the president. “Closing down the border would have a potentially catastrophic economic impact on our country, and I would hope we would not be doing that sort of thing,” the Senate majority leader said, although he stressed that he agrees with the president that there is “a border crisis.”

When Trump doubled down by deeming national security more important than trade, administration officials who were obviously not consulted struggled to offer some reasonable solution. Larry Kudlow, Trump’s chief economic adviser, suggested to reporters that both national security and trade are “essential” – not one more than the other.

He suggested that the administration was exploring the possibility of keeping one lane of trucking traffic open at the border to “help supply-chain issues” – but one can imagine the serpentine lines and truck-by-truck checks such a scenario would require.

“If you ask me the mechanics of it, I’m not the guy, but that is possible and that will help the supply-chain issues,” Kudlow said, trying to change the subject to negotiations over the U.S.-Mexico Canada Agreement on trade.

By Thursday, the president had let Kudlow and other surrogates off the hook to find some type of workaround by backing off the immediate threat to close the border and instead turned to tariff threats. He said Mexico must step up its enforcement, and over the next year must prove it is stopping the flow of drugs coming into the U.S.

“If Mexico doesn’t give the help, that’s okay. We’re going to tariff their cars coming in to the United States.”

It was a second time in a week Trump decided to reverse course on an issue he had raised, leading Republicans to publicly and privately grouse about getting caught, without warning, in the crossfire of the president’s “fire for effect” impulses.

Many congressional Republicans also decided to distance themselves from the administration by cutting off U.S. support for Saudi Arabia’s military campaign in Yemen. The House on Thursday approved a previously passed Senate measure to break U.S. ties with that conflict. The White House vowed to veto the bill.

Even though he reversed course on his border threat, Trump still plans to head to Calexico, California on Friday to inspect a recently completed section of border wall. His supporters believe the pre-planned event will show him in a position of strength, spotlighting action on his signature 2016 campaign promise. It will also highlight Democrats’ refusal to address what President Obama’s homeland security secretary recently deemed an undeniable immigration crisis.

Kudlow and other aides said Trump’s shutdown threat may have caused an intra-party skirmish, but it got Mexico’s attention. The Mexican government in recent days has agreed to help prevent immigrants from crossing into the United States by adding more checkpoints and allowing people to remain in that country while seeking asylum.

“The Mexican government is doing better than some on the Hill,” he added.

Kudlow explained the threat as “an exclamation point that shows [Trump’s] seriousness. … He’s flagging to the American people just how committed he is to restoring law and order down there.”

Trump, before departing for California Friday, again said he is looking at imposing an “economic penalty” against Mexico in response to drug trafficking and boasted about the number of migrants Mexican authorities had apprehended in the last four days.

“They’re apprehending everybody,” he said. “It’s never happened like that in 35 years.”

After a week of scrambling, Trump appeared to be back on solid, predictable ground, and his fellow Republicans are no doubt thankful for the reprieve – however long it lasts.

Democrats' Railings About Barr Going to End Badly for Them